Rev. Austin Miles
In search of our closest relatives

July 31, 2013
It must be true. It is taught in all university anthropology classes, high school biology classes and declared on The History Channel and documentaries explaining the origins of the earth, that chimpanzees, the Great Apes and primates in general are our closest relatives. We evolved from them, they teach, so it must be so. 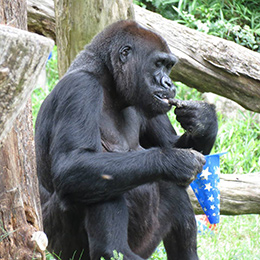 Desiring a family reunion, this unworthy Australopithecus journeyed to San Francisco to seek them out. No, no...not San Francisco itself, the San Francisco Zoo! Now stop jumping to conclusions...just stop it!

The first visit was with 3 Siamangs cataloged as 'lesser apes" with spidery extra long, agile arms and legs that received me with curiosity. Next were the Orangutans, the "rarest of the great apes" and are known as "The people of the forest." Two of them knuckle-walked to the front of the island to observe me. Then a visit with the Chimpanzees. They seemed to be laughing at my presence.

Then the moment of greatest expectation. A visit with the Low-land Gorillas. What extraordinary creatures! They are shy and gentle, vegetarian, travel in family groups, led by a silver-backed male. They have a tradition of behavior which is passed along from generation to generation and have long lasting nurturing by the mother.

The Great Apes were a special mystery. If indeed we evolved from them, meaning they became something else other than what they were, then how come they are still here intact? If something changes into something else, then it is indeed something else with no trace left of the thing it changed from. But here they were. And who are we to question intellectuals?

Recently over breakfast, an acquaintance pointed out that the Great Ape has exactly the same bone structure in its hands as humans. That settles it. Well, not quite.

My lab, Rusty, shares the same passions as me, joy, grief, anxieties, fear and love. Not only that, but the vet advised us to give him Benedryl, like we take, for his allergies. However, as much as I love my dog that does not make us related. Nor can I receive a blood transfusion from him or him from me.

But, we are told, Apes and Chimps can learn to communicate in sign language. So can Rusty. He has learned sign language and obeys a signal given him.

On the way out of the zoo, I passed again through the elevated area where one could view several enclosures from the top down to the main level. Several windows there had not been noticed before.

Looking in, it was astonishing to see several primates with what appeared to be clothing on their bodies. One was observed picking up a round tube- like object, putting a rubber band around it with amazing dexterity, and placing it into a paper bag held by the other hand, then handing that to another primate.

Then, to my utter disbelief, a primate placed one if its babies into a device with wheels and a large tongue-like handle at the back of it and pushed it across the area. There appeared to be a definite sense of communication between all of them in the area. It's all true! Darwin was right!

Yes, I pondered, this is indeed, a family reunion. This profound admiration for the accomplishments of primates came to an abrupt halt when it was realized that I was looking into the zoo gift shop.

The Great Ape is a very noble, gentle being, intelligent, loving and will provide and protect its family and community. It must be considered [that] to suggest humans sprang from those family oriented creatures would rightfully be an insult to the apes and chimps. Apologies are in order. By sign language of course.

So here it is, publicly: Apes, as a human and on behalf of other humans, I apologize for that blunder of likening ourselves to you. We didn't mean to make a monkey out of you.....wait!...hold on!...that was a careless UN-PC comment. There was no intent to degrade monkeys in any way and...aaaARRGH! I'm going out for another long walk.