November 28, 2013
Warning to readers. There are specific references to the fur and UGG Boot businesses and how those furs are obtained. Even though extremely disturbing, this must be read to understand fully what is done to innocent animals to make these products for profit and why it must be stopped. So take a deep breath, brace up, and come with me to learn the truth. 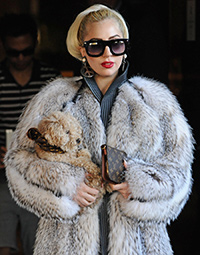 The fur trade is the cruelest of all industries, using live animals to make fur coats to make women look "beautiful." Those glamorous fur coats are the result of skinning animals alive, which they claim makes a better quality fur since the fear factor in the animal is at its highest arousal and, they say, makes the fur quality better.

They do this by sticking an electrical device up the animal's rectum then virtually electrocuting them, which stuns them while they skin them alive. What is worse, the animal's heart continues to beat up to ten minutes after they have been skinned while they are left in unspeakable agony.

Current pop star, the so-called, Lady Gaga, was challenged for wearing fur coats as well as UGG Boots which are made by the fur of dogs that are taken, strung up by their back legs and skinned alive for the fur that is used for those UGG products. And as this grisly and totally inhumane procedure is taking place, the dogs scream. Yes they SCREAM in pain.

No human being could ever take part in such a horrible activity. Those who do are inhuman savages. However, it is reported that Lady Gaga, when told of how these products are made, fluffed it off by saying, "It makes me look beautiful and that's all that counts." That comment was quickly scrubbed from the internet when the fury began. Too late. We saw it.

A company that accumulates wealth by selling these products, which is all that matters to them, foolishly sent me an ad for their products which wound up in my in-box this morning. They should know, if they have any sort of awareness at all (they obviously have none considering what they do for money), that I am profoundly a defender of animals and ready to come down hard on anyone who is cruel to them or mistreats them in any way.

The ad sent to me offered UGG Boots on sale at $104.99, stating the original price is, $171.99. So this was like an outlet. In any case one can see that this is a very profitable business, at the expense of innocent creatures put through literal hell to make this "product."

So where do they get these dogs that they brutalize? Some from shelters, some they pick up on the streets while many, yes many, are dogs stolen from owners, from a parked van, during a home burglary, or out in the yard.

These lowlifes who steal them get about 5 to twenty dollars for each dog they steal and traffic to the smugglers. It could be your own beloved dog or puppy.

There is no return email address to confront these criminals. However, by clicking on to images in the ad, this address for a search engine came up: Either click on or cut and paste in search engine.

The first two entries listed will put you in.

So how can those companies who make the products,along with dealers and stores that sell them be contacted and dealt with? We can start at Nordstroms. And by confronting Lady Gaga when she comes through to sell you a ticket for her 'concerts.'

How can one not know that animals have personalities, feel love, fear, pain, and have anxieties just like us? Or worse, those who DO know and do not care. It is difficult to imagine that there are those who have no feelings or a conscience. But those of us who do must take a more active stance.