Rev. Austin Miles
Wild animal hospital unlike any other

January 7, 2014
WALNUT CREEK, Ca. The word undoubtedly had spread through the woods that our backyard was animal friendly territory. Many visitors have come through including a fox. A couple of opossums felt so comfortable that they spent their days on our patio cover, first noticed when a tail had worked its way through the lattice. 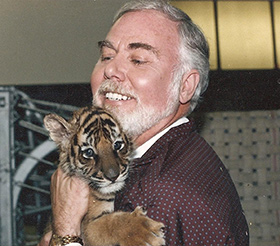 Others came including what looked to be a baby possum that we became familiar with. One morning my wife called to me saying that something was wrong with the baby."He's been injured," she said, which could be observed by its movements on the fence and when it came into the yard and put its snout in a food dish by the back door and simply remained there without much motion. A puncture wound could be seen.

The one place that could be called was the Lindsay Wildlife Museum and Rehabilitation Hospital in Walnut Creek. When they were called for advice, they said the opossum should be put it in a box and then to call them back.

So how do you approach an opossum? It started by going out the side door of the garage, up the side and into the back yard, walking gently on the rocks that had replaced the grass, with a towel in my hands.

Approaching it did not disturb the little guy. The towel was gently draped over him, he was picked up, placed in a box, as instructed, then taken to my office for another call to Lindsay. They said to bring it in. Not once did the little possum make any kind of threatening motions, sounds or hisses.

He was put in the back seat of my car. When the car began moving, the possum suddenly was very much alive and began moving about in the box, curious about what was going on.

The Lindsay Wildlife Museum was waiting for me as I brought him in, and they immediately took him in for surgery. They saw that he had not been shot but had been bitten, no doubt by a dog, since possums usually would not do that to one of their own. The bite had brought poison into its body. They also told me that it was not a baby, but a full grown possum that has that growth trait.

The little guy was very much on my heart as the time went by. Unfortunately, he didn't make it. The poison had been in its body for too long. A sense of sorrow flooded my very being when the doctors came out and sadly told me.

But the good thing was that he could have been attacked in its weakened condition and died in horror. Instead, he was comforted, safe and died peacefully. For that I will always be grateful to the Lindsay Museum.

The little opossum was not the only patient in the rehabilitation center. There are eagles who have been in a confrontation that cost them a wing, or crippled a leg, bob cats, foxes, a coyote even a skunk – animals of all kinds that needed help.

The animals that are repaired are put back out in the wild. The ones that have not completely healed or cannot function totally, like the injured eagle, are kept at the museum where they become part of the family and teach museum visitors about what and who they are and how they live. And the animals are happy there.

Many school field trips go there, teaching children that animals have personalities, feelings like we do and experience happiness, anxieties, fear, pain and love... just like us. The visitors learn the responsibility we have to animals, leaving the experience with a whole new awareness with the knowledge they receive.

This wild life hospital is the oldest in the U.S. established 60 years ago. It started in California, a state that is fiercely protective of animals. This is why I love this state, in spite of some of the quirkiness here.

There is no government funding for the Lindsay Wildlife Museum and Hospital. It all comes from private donations. Last year, according to a Contra Costa Times story (1/5/14) written by Elisabeth Nardi, 5,500 injured.wild animals were taken in and 80,000 people visited.. The museum costs nearly $500,000 a year to operate and now, with the economy as it is, they are short and need help.

To learn more about the Lindsay Wildlife Museum and Rehabilitation Center in Walnut Creek, California, go to this website: www.wildlife-museum.org

Photo Caption: A Younger Rev. Austin Miles With a Friend