May 5, 2014
SOLVANG, California – Efrem Zimbalist Jr., the suave film star with the beautiful cultured resonant voice, who starred on the popular TV series, 77 Sunset Strip, The FBI and several movies including Wait Until Dark with Audry Hepburn, died in his home in Solvang, California on Friday, May 2, 2014 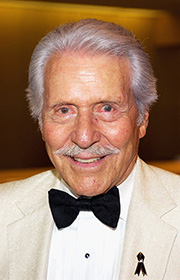 Efrem personified what an actor should be in the handling of every facet of his life with class, dignity and absent of any scandal. Efrem made the whole profession look good.

A deeper part of his life was his devotion to God which came about in an unexpected way. At the height of his stardom, he and a group of actors would watch TBN (Trinity Broadcasting Network) to watch the preachers and laugh uproariously. That is until he saw evangelist, John Wesley Fletcher who got to him with his message with such force that Efrem's life was immediately transformed.

He and Fletcher were two opposite personalities, Fletcher with his pound and shout style of preaching and Efrem with his sophistication. Yet, against all odds, it happened.

John Wesley Fletcher had become a regular on the PTL (Praise The Lord) TV program hosted by Jim and Tammy Bakker. Fletcher would later flaunt his homosexuality to such an extent that all the male security guards went in mass to complain about him to the head office. Fletcher had been coming on to everyone of them. Fletcher later died of AIDS.

Being a regular guest on the PTL Club, I met and became friends with Efrem. and had often wondered if the truth about Fletcher made him as angry at him as I was with a friend of his in Hollywood who "witnessed" to everyone in his path. This guy, whom I will call, "Jackson" grabbed on to me determined to convert me, not for my sake but for his own bragging rights.

At that time I was the Ringmaster for the circus with a high profile and he had been a circus performer before getting into film work. To convert the Ringmaster would be a big notch in the handle of his rifle.

What was even worse, this hypocrite who demanded that everybody 'get saved' came on to my daughter who was not yet in her teens. One option I considered was strangulation.

I had the chance to ask Efrem a question at a 4th of July weekend celebration in 1982 at Heritage USA, the new home of PTL. A special viewing area by the lake for dignitaries to watch the fireworks display had been roped off. I was taken to that area and seated next to the movie star.

We chatted about the 'born-again' life. At that point, I said: "Efrem – I must ask you a question. How did you feel when you learned the truth about John Wesley Fletcher? Was this an embarrassment to you?"

"Oh – not at all," he responded in his rich resonant tones. "No matter what he turned out to be, I'll always be grateful to him. It's because of him that I'm a born-again Christian and know Christ"

"I see. I had a similar experience with "Jackson" and I hate him for it," then detailed how this counterfeit Christian used me simply to bask in a glory that was not meant for him.

"Have you prayed for him?" Efrem asked me, with a probing look.

"Maybe you should," the handsome actor advised as a giant cluster of fireworks exploded all across the sky for the finale of the display making a perfect finale to our conversation.

Efrem Zimbalist Jr. was a gentleman in all respects. His CD's of him reading through the Bible with that great voice are very treasured.

He is one of the last of the great movie stars who truly exemplified the highest ideals of his profession along with personal ethics, manners and consideration coupled with his top-of-the-shelf acting skills with a strong presence, not only on screen but in every-day life where he always stood out.

His exit has left a huge gap for everyone who watched him in films and especially those of us who had the great privilege in knowing him personally.