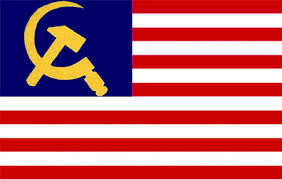 WASHINGTON, DC – While marching America into Communism, Obama, right from the beginning, was not subtle. He told Joe The Plumber that he intends to "Redistribute the Wealth," a page right out of Karl Marx. After hijacking The White House, he immediately appointed CZARS, an office known only in the former Communist Soviet Union.

Those who oppose the redefinition of marriage are sent to "sensitivity training," which in Communist-led countries means "Re-education camps." Those who dissent in any way are required to submit to "Psychological Evaluation." In Communist countries, Christians and anyone who opposes government are sent to insane asylums. (Example Below)

Again we emphasize that Obama has the potential of being a great man in history. It is up to him to disconnect from the Communist handlers who are misleading and deceiving him, making him a "useful idiot (Stalin's comment), and to reclaim his potential, rather than one day dying in disgrace and leaving his legacy and potential unfulfilled.

It is to be noted that this writer, during a time of personal turbulence, spent time behind the Iron Curtain, and observed firsthand the horrors of living under Communist domination. It must be prevented from happening here. Even the Democrats, who are pushing for Socialism with all their energies, will NOT be happy if it does overtake America, which has already begun.

Patriot Joe Otto with his daily "Letter to Conservatives" tackles these very issues without restraint. It is with his permission that we re-publish his letter in its entirety: The highlights in his letter are mine.

"This is supposed to be the United States of America, not some Orwellian dystopia where citizens can be arrested, detained, and deemed mentally deficient all because they expressed their dissenting political opinion!" Joe Otto

I have been thinking over the past few days about a simple question: Why do Liberals despise the Bill of Rights?

Whether it is the Second Amendment's right to bear arms or the Fourth Amendment's protection against unreasonable searches and seizures, Liberals seem to look at these rights as nothing more than guidelines.

Now, I know what many of you are thinking. Yes, there are plenty of Republicans who oppose much of the Bill of Rights. While they may be "Republicans," that is nothing more than a title. They certainly are not Conservatives.

While it has always been fashionable for the Left to target the Second Amendment, it has been assumed that the First Amendment was set in stone and wasn't up for debate. That was until Barack Obama entered the White House. Now, Harry Reid has promised to put a Constitutional amendment up for a vote to change the 1st Amendment!

Make no mistake; there are a lot of people who really hate Obama and his leftist policies. You can count me as one of them. As much as individuals may hate Obama, hatred alone has never been a crime. U.S. citizens have an enumerated right to speak their minds when it comes to politics without fear of being punished.

So, what do we do when U.S. citizens begin to be rounded up and detained over "controversial" Facebook posts about the President? What are we supposed to do when the government equates disapproval of a President with a conspiracy to overthrow the government?

This is happening right now!

Tell Congress it MUST protect our 1st Amendment rights and STOP the government from targeting citizens based on their political views!

The IRS scandal is a perfect example of government bureaucrats punishing Conservatives for their political views. Even though Conservative non-profit groups were doing the same thing as their Liberal counterparts, only those on the Right were targeted by Lois Lerner.

Most people will never experience this type of targeting and 1st Amendment violations unless they start up their own non-profit. But what about the things you post on Facebook, Twitter, or even over e-mail?

You might remember the story of Brendan Raub. Brendan is a Marine who would often take to Facebook to express his, for lack of a better word, "displeasure" of how the Obama administration was running the country.

In one of his Facebook posts, Brendan listed everything wrong with the country today, talking about how our leaders do not respect the People. Ironically, the post also criticized how the government doesn't respect individuals' rights.

Within days, Brendan Raub was in police custody. Not because he physically hurt anyone... Not because he was plotting to overthrow the country... But because he voiced his dissent (rather eloquently, I might add) and urged people to take their country back.

Once he was detained, the FBI forced Raub to undergo a psychological evaluation against his will. When the tests came back, it was determined that Brendan Raub was suffering from "Oppositional Defiant Disorder." This is a mental disorder where individuals cannot help but oppose authority figures.

Under this definition, half of the country is "Oppositional Defiant." Actually, according to the most recent polling, 55% of the country disapproves of Obama. Is that what it has come to? First, we were deemed racists for opposing Obama. Now we're mentally ill for disagreeing with him?

This is supposed to be the United States of America, not some Orwellian dystopia where citizens can be arrested, detained, and deemed mentally deficient all because they expressed their dissenting political opinion!

This is exactly what people say could never happen in America... And yet it continues to happen!

This is all connected! The Left wants to control what you can and cannot say as a way to control dissent. Harry Reid has promised that he will put a Constitutional amendment up for a vote in the Senate to change the 1st Amendment. These two Liberal branches of government are conspiring to take away YOUR right to free speech and they expect you to just accept it.

Over my dead body!

Join me in forcing Congress to STOP the targeting and detainment of dissenting citizens and put an end to Harry Reid's tyrannical Constitutional amendment!

Growing angrier by the day,