November 30, 2014
COLLEGE STATION,TEXAS (11/28/14) – When frequent contributor Rev. Ed Berkey (retired) sent me this in an email, like you, I yelled out a loud – WHAT? After this passionate exclamation echoed from my office into infinity, someone helped me off the floor. Considering Obama's work (?) history this seemed very unlikely. 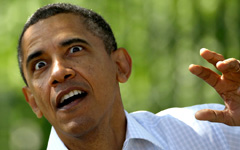 Even without highlighting executive dumpsters from a long list of his 'presidential' actions,(including an apology tour degrading America, playing golf or taking an expensive taxpayer paid vacation during a national crisis) ,there is a right-now current outrageous action from him that stands out.

Watching the demon-strators in Ferguson, Missouri, complete with destruction, smashing windows, burning down businesses, looting stores, turning over cars and firing guns [as] the town was being torn apart, it was puzzling not to see any National Guard troops intervening even though they had been called to duty there. In fact they were not to be seen, period. The rioters crashed, burned and looted the town without any interference. WHY?

According to various reports, Obama had ordered Governor Jay Nixon of Missouri to have the National Guard units stand down – not to stop the lawlessness or to protect anyone from the rioters. Benghazi comes to mind. Of course, we understand that to stop or punish any black person in the midst of criminal activity would constitute RACISM doncha know! We can't have that. Only WHITE PEOPLE can be punished for doing anything and everything.

So in the midst of these various events, how could Obama be heralded the "5th Best President in Our History?" It was with exceeding bravery that Pastor Ed's email was opened and cautiously read. Here are the facts:

From a total of 44 U.S. Presidents, Obama has been rated as 5th best according to a study completed at Texas A&M University. The Public Relations Office at A&M released this statement:

"After only 5 years in office, Americans have rated President Obama the 5th best President in U.S. history."

These are the statistics according to Texas A & M:

1.) Reagan and Lincoln tied for first:

NOW it makes perfect sense. Our thanks to Rev. Edward Berkey with a tip of the beret from MilesTones for alerting us to an undeniable fact of history.