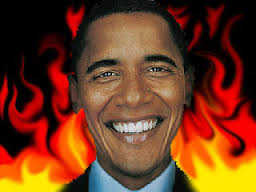 BRENTWOOD, CA (3/17/15) – ”The question above is a carefully planned device to direct people into disbelieving a real and present danger. We are now being programmed to not even mention the possibility of a devil, or Satan, under fear of being declared a nut case. Even though his existence and purpose is made clear in the Bible, we have all been bluffed into silence.

The same tactic was used in the days of homosexual cross-dresser, J .Edgar Hoover, the devious pipsqueak who headed the FBI for many, many years, intimidating everyone including highly placed politicians and even presidents. People feared him, granting him the power he craved.

He stated publicly his desire to eventually have a file on every man, woman, and child in the United States. Quite an ambition considering that those were the days BEFORE computers. He had a goal, bordering on insanity, to totally control America. He left many innocent victims strewn along the pathway of his tiny footsteps. He wanted NOBODY to even question him or his ambitious tactics.

To effectively discourage complaints of the egregious conduct of his agents, Hoover had a required question to be put on all psychiatric examinations for job applicants. Remember this? The question was: Do you think the FBI is watching you? That question cleverly instilled in everyone's mind that to even think such a thing was due to mental illness and everyone quickly marked, "no." That was in the days where the FBI clearly overstepped its bounds continually. Hoover made certain that no complaint against him or his bureau would be taken seriously.

This is exactly the intentions of Satan, to discourage anyone from acknowledging him as the personification of evil. And that tactic has been so successful that you SELDOM hear any mention of this from behind church pulpits. Why? Most pastors today will avoid the subject and even eliminate this important teaching in the Bible, not wanting to appear fanatic. They want to show that their churches are relevant for today and are up with the times. That is called, progressivism.

As a result, Satan has been unleashed with little or no restraints as havoc is caused throughout the world including the brutal rapes of little girls and little boys and senseless murders. Notice the increase of evil for the sake of evil. Not to settle a score or to punish for a bad debt, but simply to kill someone just for the sake of doing it. Or the new thing, to travel in twos and suddenly hit someone walking down the sidewalk, young or old, in a fad called, "The Knockout Game."

Assisting Satan mightily is the individual currently occupying the Oval Office illegally. He is the most anti-Christian, anti Morality, Anti-Family, anti-America and anti-life "president" in the history of The United States of America. I put quotes on the word "president" because he is NOT the president of the U.S.,not even a U.S. citizen having been born and raised Muslim in Kenya and groomed and sponsored by the Communist Party USA (CPUSA). He was PLACED in the Oval Office by massive voter fraud which has been documented in many stories. He was NOT voted in.

He is such a fanatic for killing babies, who are capable of living outside the womb, that he has even ordered that pregnant illegal alien children who cross the border must be referred to Planned Parenthood by any churches or charity organizations they turn to for help.

Yes, churches must cooperate to see inconvenient babies murdered. Indeed, have you heard the latest? Now hold on to your seats. It has been reported that Obama has made plans to change the president's photo on the $50.00 bill to a photo of, now get this, Margaret Sanger, the matriarch of abortion, coming to a bank near you. We hope those reports are false.

Considered one of the highest places on earth, Obama sits in the Oval Office of Washington, D.C., sitting at the right hand of Satan.

Remember Molech (Moloch) in the Old Testament? He was a pagan fire god who Israelis worshiped by burning their children to death as a sacrifice, while musicians played loudly outside and beating drums, which was to drown out the screams of the children.

Some of the Biblical chapters showing this is: Leviticus 18:21, Jeremiah 7:31-32 followed by verses with the punishment of Israel for this violent pagan worship which is shown in verses 32-34, and 2 Chronicles 28:3. Jeremiah 15: verse 5 to the end of the chapter also shows the punishment from God for this practice. And history has already shown that the severe punishments of God to Israel are repeated in the United States.

We are back in Ancient Israel today, as millions of helpless little babies, who feel pain, twist in agony as they are being dismembered alive under the leadership of Obama in Washington, D.C. This is the very face of evil and Satan, defining spiritual wickedness in high places. It is here.

While Satan cannot directly kill someone, he can manipulate one's mind to kill himself through demonic depression and manipulating the minds of others to suddenly lash out at their own families. He can attack one through health, not actually causing the health problems, but attacking those areas which are the weakest parts of your body or attacking the weakest part of your minds such as temptations that you foolishly have let in. The purpose is to confuse one to wonder where God is or, is there really a God? That is a steak dinner for the enemy.

Chaplain Denny, the Race Car Chaplain had a series of satanic attacks during the past two weeks. It started as he prepared to firmly take his place as a race track chaplain. Everything was thrown in his path to discourage him going to that event.

Regardless, he tightened his jaw and headed to that Bakersfield track for a four day Nostalgia Top Fuel Drag Racing Event. He ministered to all the drivers, prayed with them and drew several to a closer relationship with God including one who had no relationship with God.

He even had the first time experience of words coming out of his mouth that were not his words, but God's words, causing one driver to say, "WOW, I never looked at it that way before!" When Chaplain Denny returned, he was hit on all sides by the devil himself causing torment that would possibly weaken him. Why? More ministry assignments have begun to come in.

Yesterday I did a major funeral, the first service I had given since my fall three weeks ago leaving me with painful injuries. My wife drove me to the chapel. On the way , sudden stomach cramps began, then some sharp pains in that area. Would I be able to conduct that funeral or could my body give out? Will I be coordinated and will my mind be intact? I'm still in recovery after all. If not the results would be disastrous with the Word of God not getting through and it would be the end of this ministry.

Then, the light came on, and I began to pray as the car moved toward the funeral home, rebuking Satan and asking God's help and strength. I commanded Satan, in the name of Jesus, to get behind me, that he had no power and God has already empowered me to do a great funeral service.

The devil did not want me to do that service since it was a major event in a chapel overflowing with people that would be comforted and benefit from the words I was to share. Plus, if the service flopped I probably would have felt that I was over with and never do another public service. And the enemy will always attack your weakest spot, in my case, the injured body. Peace then came over me and to the injuries in and on my body.

Instead of Satan's plans, after invoking God's Grace the service was GREATLY received, one of the best yet. It all came together spectacularly with presentation, posture and voice. Praise God. It would not have happened without God's Grace. The anointing was felt.

I am healing well and have yet another funeral that just came in for the National Cemetery on Friday, a full military funeral. The devil did his vulgar best to keep me from doing that service yesterday. God's power came through. The enemy was defeated. Only because I was able to use God's power to overcome Satan's evil. And that service was fully blessed.

The deceptive enemy is very much alive and active in destruction. Don't let anyone convince you otherwise. But we all have power from on High to stop him in his tracks. Never give in, never give up, but press on! And move in closer to God.

Meanwhile, "May God Bless you until you're paid better." Chaplain Denny Guinta

FINAL NOTE: Satan is very much alive and well. While trying to do this story, my computer began acting up, spacing didn't work, paragraphs would not separate, some things were highlighted in black that should not have been and it was impossible to correct and get rid of it. and in every Bible verse or when God was referred to, a Spanish accented "a" would be scattered throughout that sentence, indeed, throughout this story. It took 3 times as long to complete and publish this story than any other.Then I was joined in prayer against Satan and this piece was completed.