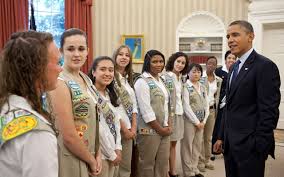 WASHINGTON, D.C. (5/14/15) Under Obama's direction, America is beginning to look like a freak show. Watch videos of any "Gay Pride LGBT Parade" and you will see what we mean. Take a look around the streets, in newspaper reports and countless images on TV attempting to make gender bending acceptable, even desirable.

An example is a new commercial showing a personable "waitress" all primed up but speaking with a man's voice like this is perfectly normal. Transgender individuals are multiplying along with the demand to be accepted. They say, "We're just like you." NO THEY ARE NOT.

The Obama Administration has long worked to blur the lines of gender distinction, to tear down morality, which is the strength of a people, and is instead, hell-bent on destroying the traditional family.

Businesses owners can now be fined and jailed for refusing to make a cake or t-shirt with a homosexual message and that includes ministers who refuse to officiate at a wedding consisting of couples of the same sex, even though the Bible states clearly that homosexuality is a sin. But then again, Hellary has publicly stated that the Bible must be re-written regarding those topics for the good (comfort) of society.

Army chaplains are discharged from military service for mentioning the name of Jesus at a chapel service or funeral and for not catering to or promoting sodomites. This is by Obama's order.

The illegal in the White House did state, before his occupation of The Oval Office, that he would change America. He has certainly accomplished that. America is unrecognizable today.

Not only that, he has aggressively insisted that the world share and support his sexual obsession to the point of ordering U.S. Embassies throughout the world to fly the rainbow flag over each one. He has even demanded that uniformed military parades include carrying a rainbow flag. What's more, soldiers have been required to salute that flag of perversion.

And who can forget that military madness in which soldiers in a parade were ORDERED to wear red high heels with their uniforms. What a ridiculous image of The United States Army, thanks to Obama.

Here is the latest: According to American Family Association (AFA), a new Girl Scouts of America (GSA) policy will now extend membership to boys who identify as girls. (?) Just wear a dress and come on in.

Boys in skirts, boys in make-up and boys in tents – yes with girls – and boys using the same bathroom and showers as girls. This obscene nuttiness has been pushed with fanatical determination by Obama.

The GSA was originally established, like the Boy Scouts, to give young people character, ethics, dependability and modesty while learning the importance of honesty, manners, respect and commitment. Membership in the Scouts was meant to set young people apart from a troubled world and set them on the path of success. There was a strict code of conduct and morality for candidates, with a specific expectation that every recruit honor God.

This fraud in the White House says we must be accepting of all, no matter how loathsome they are or what disgusting habits they exhibit. The Girl Scouts of America GSA now allows lesbians to become members and leaders as well as engaging in a disturbing partnership with Planned Parenthood.

So what is the purpose of allowing your children to be members of organizations that will simply teach them to be accepting of all the world's weirdness and perversions instead of raising clean-cut kids with high standards? But it gets worse. Now they allow Planned Parenthood to teach them about how to murder, which is called abortion, as a means of birth control.

What value is it to enroll your kids in these organizations that simply mirror what is now considered normal on the streets and to encourage it? This is what Jesus meant about 'being in this world but not a part of it.' (derived from John 15:19, John 17:14-16.)

Obama is one of the loudest voices to forbid counseling for those who desperately want to get out of the "gay" lifestyle. Any counselor or therapist who responds to such counseling requests can now be stripped of their license. This is totally unconstitutional but not the ONLY unconstitutional action Obama has illegally taken.

While Obama constantly invites active sodomites to the White House, he has virtually banned any ex-gays who have come out of that dangerous homosexual (disease-mental problems-suicide and violence) world and want to talk to him. Obama does not want anyone to leave that perverted world where human feces is a big part of their "love making." (This is utterly too nauseating and repugnant to detail)

Today a vote was taken to ban long-term abortions after 20 weeks, a procedure that literally tears apart a little living baby – yes a BABY THAT FEELS PAIN – not a fetus-A BABY--tearing off their little legs and arms, one by one, as this living child twists in agony. Legislators have pushed to at least give anesthesia to these tiny victims who have done no wrong but are simply inconvenient. Yet, this humane bill has always been voted down. They apparently hate babies so much that they seem to actually WANT their deaths to be horrific painful ones. We are no longer members of the human race, but savages.

Today the House voted to ban these barbaric late-term abortions. It is now up to the Senate. However, Obama, the most pro-abortion "president" in the history of America, has stated that if that bill passes, he will immediately veto it. This is the personification of evil.

The sub-human creature called Obama, can rightfully be identified as a charismatic monster that rose straight from the pits of hell. From hell did he come and to hell shall he return.

And the sooner the better.