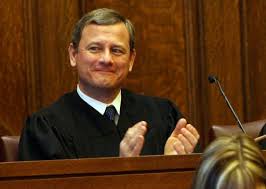 WASHINGTON, D.C. (6/26/15) – What did Chief Justice of The Supreme Court, John Roberts, TRADE to make the totally anti-American, anti God rulings that have been barreling down the track with him at throttle for the past few days? He MUST have traded something to sell out his integrity that would be in his own self interest to cause him to betray his country.

Within this past week he has ruled for 'housing non-discrimination equality.' This means that anyone, no matter who they are, what background they have, or even jobless, whenever there is a house vacant, they have the RIGHT to move into that house and banks MUST give them the loan to move into that house, even in upscale neighborhoods, when they are incapable of even making the payments.

Yep, that is their right to live in any house they desire, so saith our "leaders."

This is exactly what happened years ago when Fannie Mae, Freddie Mac and other big loan companies were forced to lend money to those who were unemployed and had no way to repay their debt, meaning it would be absorbed by the taxpayers, us, with OUR money, that we worked for. This caused the crash of several loan companies and banks. Roberts just resurrected that nutty bill that will again cause chaos with our economy.

Next, a couple of days later, he ruled that Obama-care is legal and stays put, despite it being unconstitutional.

Then today, the decision came down to destroy the traditional American family, which of course affects the church and ministers. In the white picket fence apple- pie state of Idaho, the politicians recently ruled that any minister who refuses to do a same sex marriage will be jailed.

Roberts obviously was threatened or intimidated by Obama and the Communist Party USA (CPUSA) who performed the silent coup d'état to place Obama in the Oval Office. That combination has also put the Supreme Court under their command. It is curious what they may have on John Roberts to make him their puppet.

Do not be quick to dismiss this possibility. When I wrote for The Christian Post, located in D.C., not far from The White House, I did a critical piece about Obama. It was published then it was suddenly yanked off the site. When I asked for an explanation, the editors would not give a straight answer.

A year later the editor left CT, then called me to reveal that yes, they had a 'visit' from down the street, that required them to scrub my story.

It is personally distressing to observe John Roberts cooperating with CPUSA. When the televised hearings showed the confirmation hearings, which lasted a couple of days, regarding his candidacy for Justice of The Supreme Court, this man was brilliant. The questions about law were profound, yet Roberts immediately answered all of the questions telling what each case referred to was about, who the judge was, the decision rendered, and even the dates. It was incredible! He displayed the most competent legal mind of anyone I have ever studied.

He was used as an example in a speech class I taught. I greatly admired him. But that admiration has nosedived, especially during these last few days [as] he has ruled exactly as the Communist Party dictated which would be in their interest:

A ruling that greatly affects our economy by being forced to grant loans for those who are not employed, to make certain that the government controls the health care of all citizens, and now this latest ruling which is a slap at the church, and God, since churches are illegal in any Marxist, Communist led countries. We are almost there.

The responses from various news sites express outrage, with calls to 'lock and load,' with many more calling for Revolt. That of course can be done without 'locking and loading.'

And how can we accomplish this? Flood House speaker John Boehner with phone calls, emails and regular mail, telling him it is his duty to call in the Sgt. at Arms to remove Obama from office for defying the Constitution, not once, but many, many times. That is a legitimate law to remove a traitorous "president." We must demand that now.

This is the path to begin. This procedure is legally set up. Use it. Rise and act NOW. There is little time left.