Rev. Noah Hutchings' familiar voice was a staple at Southwest Radio Ministries out of Oklahoma with a down home voice that captured listeners and put his guests at ease. I was on his program when the TV series, Ancient Secrets of the Bible began to air. I was a writer-researcher for that series as well as appearing on camera. Rev. Hutchings was incredibly knowledgeable and a man who knew his subject well. He lived for God. 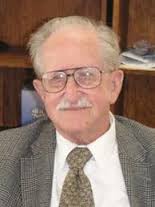 He joined Southwest Radio Ministries in 1951 and would become president of that ministry in 1988. He would begin each broadcast with: "God is still on the throne and prayer changes things."

Rev. Hutchings was a prolific writer, publishing over 100 books, many which were made into videos for use in Bible studies throughout the world.

Rev. Hutchings was a huge supporter of the State of Israel and led over 50 tours to Israel. According to his daughter, Carol, he also led tours and mission trips to China, Russia, Mongolia, Egypt, Jordan and Turkey along with other countries in the Middle East, Asia, Europe, and Africa.

Rev. Hutchings' influence within the Christian communications field is incalculable. Under his direction, Southwest Radio Church helped to launch the ministries and writing careers of Dr. James Dobson, Theodore Epp, Mark Hitchcock, the late Grant Jeffrey, and many others.

Because of his knowledge of the Bible and work at Southwest Radio Ministries, Rev. Hutchings was awarded two honorary doctorates of divinity, one from American Bible College and Seminary in Nashville, Tennessee, and one from St. Charles University in St. Charles, Missouri.

Noah Hutchings was born in Messer, Oklahoma, one of six children. After graduation from high school and a vocational tech school, he was drafted into the army and served as a radar technician under General Douglas MacArthur in the Pacific theatre during World War II.

After the war, Noah Hutchings returned to Oklahoma and enrolled at a small university in Oklahoma City, eventually receiving a degree in Business Administration and Accounting. While waiting for a position to open up at a large local business in 1951, he took a two-week temporary job as a typist with the late Dr. E. F. Webber and Southwest Radio Church of the Air.

It was during this temporary job that Noah Hutchings became a Christian. When it was time to start the position with the other business, he turned it down and stayed at Southwest Radio Church. God's Hand was in every detail of this journey.

Rev. Hutchings was also a very humble man who did not put on airs, was very easy to talk to, and reflected Christian Grace in all situations. He was the real deal. What you saw was what you got.

He gifted me with a couple of his books which I proudly have in my study I wish the world was filled with ministers like him today. He was truly a servant of God. Though his voice has been silenced, his presence will still be powerfully felt by his many writings. RIP Good and Faithful Servant.

You can send messages of condolence to his daughter: Carolrisiah315@yahoo.com