August 6, 2015
BOISE, ID (8/4/15) – Idaho is a conservative state with friendly people. There are virtually no bad neighborhoods there, as real estate agents proclaim to potential clients from out of state. It is a hunting state which is a way of life.

It is interesting that democrats back Planned Parenthood the gigantic abortion factory, while at the same time, are fiercely protective of animals and pass laws to severely punish anyone who would harm them. 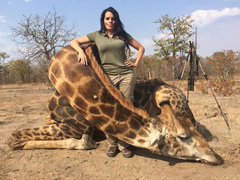 On the flip side, the conservatives show great passion in their opposition to abortion, while at the same time, they love to hunt and kill animals, which includes big game trophy hunting.

Sabrina Corgatelli who lives in McCammon, Idaho, works as a Senior Accountant for Idaho State University. She deals with grant awards. She has been employed there for 8 months, it is reported.

She also is known, by her own description, as The Italian Huntress. Not just Idaho hunting, mind you, but big-game trophy hunting. She wants to kill every kind of animal possible and boasts of her conquests by posting photos of her and the dead game she cruelly brought down, with a smirk on her face.

Volumes of protest messages filled her in-box, many of them threatening her life. The constant flow of those vitriolic messages would rattle sane people. However her sanity issue is not a factor here or even a question. Indeed, she says she laughs at the negative messages and seems to enjoy the attention.

Right after Cecil the lion was murdered by Dr. Walter Palmer, she posted on her Instagram account; "To all haters – stay tuned – you're gonna have much more to be pissed about."

READERS: Did not want to use that cheap gutter-level word, but did so to demonstrate what a vulgar, course, arrogant individual this is. And she works for a university?

She traveled to Kruger National Park in South Africa for more killing that she says "gives me great enjoyment" and "happiness." Her big trophy was a beautiful Giraffe. She, of course, posed with the carcass of that animal wrapped around her body. This photo has created a firestorm.

To try and justify that action against an innocent animal, she told the NBC Today Show, Monday, that, "Giraffes are very dangerous animals. They could hurt you seriously, very quickly." How's that again?

I have known giraffes and they are in no way dangerous. They move slowly and are not carnivores. They eat vegetation. In all my years and contact with animals, I have never seen a giraffe on a rampage.

Now get this: Ms. Corgatelli used a verse out of the Old Testament, yes, the Bible, to justify her mass killings. Sorry, Bible verses will do no good here. She can use that ploy when she faces God's judgment, which she will. It would be interesting to see how God reacts to her use of His Holy Word.

These trophy hunters like, "The Italian Huntress," pay thousands of dollars for each hunt ranging from $2600.00 to $15,000 to stalk and kill creatures that are very valuable to God. These fees are charged for each animal they want to hunt and kill.

Wow, that would take a bit of money. How can she afford to do this on her salary? How much can she earn as a University Senior Accountant dealing with grant money? It might be interesting to examine this more closely. Maybe her boyfriend Aaron Nelson has money.

And how does the University of Idaho answer to the inquiries about one of their staff engaging in such cruel activities? Officials there stated bluntly: "This is not an ISU matter. Her personal choices are not representative of the university." Really?

To those officials: It is indeed an ISU matter since it reflects on your entire staff that students who register there will encounter, as they pay tuition to enroll. What sane parent would want their university kids to come under the influence of this kind of staff? A university is to prepare students to be responsible, productive, members of our society. They should be taught the highest level of ethics and principles to bring out the best in them, certainly not the worst.

Students themselves should think carefully before putting themselves under this kind of influence of human behavior. This is unacceptable.