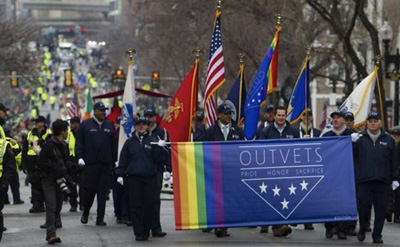 BOSTON 3/25/17 – Extortion is a felony that must be punished. Extortion means demanding an act to be performed, such as paying a ransom under threat of violence, and in this case, death.

One surrenders to the demand by an act, money, or property to prevent a threatened act of violence, or murder. An example is the old Mafia Protection racket where a store pays big sums to "protect" them from violence to their property.

Extortion results in jail time and other penalties. It is an attack on all civilization for personal gain, either monetarily or ideologically. Extortion is a serious legal offense. It is time for this law to be utilized and action taken whenever these threats arrive. So why does this statute not apply to sodomites when it is the law for everyone else? The laws DO apply to the LGBTQ crowd as it does to the rest of us.

Boston has already had a taste of this by the Muslim attacks on those attending the Boston Marathon. They planted bombs to go off in the crowd, killing and maiming spectators. This was a form of extortion. Either all become Muslims, or all will be brutally killed. That threat still stands. But the feeble minded dem-wits insist upon letting them all in our country so they can commit jihad from the inside.

The LGBTQ misfits threatened Boston with similar violence, destruction of property, overall chaos and death if they were not allowed to march in the recent St. Patrick's Day Parade which honors a Catholic Saint. Plus they demanded that they be able to carry their rainbow flags signifying sexual preferences in that parade which is offensive to God Himself. Indeed, this is blasphemy.

Why should these degenerates, who do not believe in God, the Bible or the church be allowed to march in a Christian parade? This parade is to honor a saint, not to honor the filthiest of all perversions. For example, "gays" smear their poop over each other's bodies, then lick it off. This is called, "scatting." Sorry, I hate to even acknowledge this, but it is reality....a reality that they demand for all of us to accept.

First of all, considering the seriousness of the crime of extortion, arrests should have taken place immediately when the officials were threatened with deadly violence if they were excluded from that parade. But no, instead of rightfully filing criminal charges, the authorities decided to simply discuss it. Instead of pushing back they caved in.

According to LifeSiteNews, Boston Police said homosexuals would be bused in from other states to "disrupt" the festivities posing serious threats unless Catholic organizers permitted a gay veterans group in the parade, yes vets carrying rainbow flags. That is not the army this columnist served in.

Police determined that the gay threats were "credible" but warned that they would not guarantee the safety of the public, including children, if they were not invited to take part. It was also implied that organizers would be responsible if gay violence erupted. Extortion 101. Arrests should have instantly been made. But everyone simply sat quietly.

Faced with the threat of "large-scale gay violence," the Allied War Veterans Council chief parade organizer Tim Duross allowed the homosexual group OutVets to march. Yep, waved the white flag of surrender to the lavender mafia. The media celebrated the decision as a "victory against bigotry." No surprise there.

The threats of gay violence came after political and financial pressure had failed to coerce parade organizers. Massachusetts Gov. Charlie Baker, Mayor Marty Walsh, Senator Edward Markey, and other politicians said they wouldn't participate if OutVets (which applied late to participate which would disqualify anyone else) weren't allowed to march. Corporate sponsors, including Budweiser, threatened to pull financial backing as well. Have these people taken leave of their senses?

There is another law on the books stating that it is a crime to disrupt a religious service....that means church services, where freaky looking gays in gaudy costumes and clown-like makeup stormed a church in San Francisco demanding they be served Holy Communion.

Other churches around the country including St. Patrick's Cathedral in New York City was in the middle of Mass when sodomites stormed the church during the service and threw condoms on the parishioners. Even assault could have been charged here as well as the criminal act of disrupting a religious service. But nobody did a thing. They just sat there.

This can all be stopped in its tracks by simply advising these hoodlums of this law from the platform, then pulling out a cell phone and calling the police. Once during a funeral service, a drunk came down the aisle with a beer bottle in his hand and began yelling at everyone there using the "F"word. He was informed that what he was doing was a criminal offense and I was about to call the police. He turned and bolted out. HOWEVER, he was later arrested during the reception at a union hall for the same reason and was put in jail.

Simply report disruption of a religious service and they will refer to laws including 'crimes against the public peace (Massachusetts chapter 269) as well as "Public Offenses." Whenever these anarchists try to storm your church, call the police immediately. To do nothing is to encourage and strengthen them in their quest to be in total control of everything, including the churches.

It is time to show strength and push back. Remember, this is all at the behest of the devil himself and Christians should never hesitate to take the authority given us by God Himself to send him and his minions fleeing. But whatever you do, don't just sit there obediently. Do something! This has got to stop. It is up to us.