Rev. Austin Miles
Is God in the destructive storms? 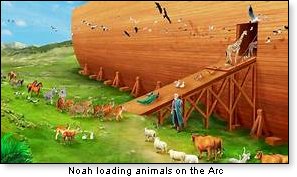 BOISE, ID 5/28/19 – Yesterday a small tornado touched down near Mountain Home, Idaho, which is very unusual. Tornadoes in Idaho are infrequent and have a very low velocity. Is that changing?

The one yesterday did no damage. However, beginning in the southern states and moving over the entire country, powerful tornadoes and floods are brutally destroying towns and villages which is now an everyday occurrence.

The weather pattern in general seems to have gone crazy. Never in the lifetime of this writer have storms so consistently hit, demolishing everything in front of them. It is as though Nature has gone wild and out of control, or more accurate, raging with NO control.

Noah's flood was a curious phenomenon. When God told Noah to build the ark, the area he lived in had never even seen rain. Yes his neighbors heckled when they learned he was building a huge boat. Something must be loose in his head, thinketh they. But as the ark was being completed, the rains came and remained for 40 straight days, drowning all humanity except for Noah and his family whom were considered 'righteous' by The Lord.

The sin amongst the people God had created, was so disgusting to Him that He determined to wipe out the earth of all but Noah's family and the animals. God's judgment had come upon the entire earth due to the sin of the people. God's had removed His Hand from the flow of nature and chaos resulted.

God vowed that He would never flood the earth again but stated the next time would be by fire. We had a preview of that with the deadly fires in California where an entire town was burned to the ground. Those fires served as a warning but people ignored it.

The sins of Noah's day could not have been worse than what we are surrounded with in this present time. In 1962, God was kicked out of our schools with the legal removal of prayer by a court case instigated by atheist Madalyn Murray O'Hair. The court listened and obeyed without push back from the public.

Sexual sins virtually were pushed in the faces of everyone in society. Filthy deviants went so far as to organize Pride Parades, with sodomites in garish makeup and clothing on the floats waving at spectators with some simulated homosexual sex for all to see, including the many children who had been brought to the parade by their parents.

Sodomite sex is now a required subject to be taught in the public schools. Again, this is a REQUIRED subject that cannot be avoided or skipped. The LGBTQ message, which mocks God, is now accepted as a valid public school course for all students even though considered gross sin by God as well as disgusting by people at large.

A horrific law titled, Roe Vs. Wade was passed in 1973 that made it legal to murder inconvenient babies in the womb by virtually tearing off a baby's limbs, one by one, until they were able to get it all out of the womb. What is worse, these babies-yes BABIES not a fetus- have a nervous system and could feel every jab and slice as they were pulled apart-dismembered-and they reacted with silent screams.

Since 1973, 60,069,971 babies have been horribly murdered – that is SIXTY MILLION – babies butchered so as not to tie down its parents. Yes, these babies die because they are inconvenient. And this is only one of many sins the people are committing against God. And our courts ALLOWED this to happen while the public stayed mum.

Half of the United States, the Democrats, have declared war on God and want his name removed from all conversations and events. We can no longer celebrate Christmas or Easter in our public schools, only Winter Holiday and Easter Eggs to re-place God. God's birth and death, so all could be saved, is now totally eliminated from our schools and much of society.

There is a move to make Pedophilia legal and the government has given tax exemption to NAMBLA – the perverted Man-Boy Love Association. Corrupt governments canceled integrity, resulting in stealing and embezzlement, which are normal activities these days, which has spun totally out of control. All dishonesty, lying and cheating grieves God.

The sins of today must be more disgusting to God than the sins of Noah's time. And it appears that God has lifted His Hand from nature. We have been attacked by our enemies (9-11) which has caused us great damage, which God has allowed, due to our voluntary separation from Him. Yes, God punishes us through our enemies.

Yes people, due to our misconduct, God has lifted his hand from the control of nature. He has allowed us to be attacked on our own soil. We have mocked God even though Scripture sternly tells us, "God Will Not Be Mocked." Galatians 6:7. People, it is time to wise up and stand against Satan.

Because of our own atrocious conduct we are now under the judgement of God. He has been extremely patient with us, but as of now, that patience has ended, just as it did with the people during the age of Noah. People are suffering as a result of their own sin.

Give this some serious thought as we are now living in the book of Revelation. It is all coming to a close. These ARE the end times.

All these problems began as we began pushing God away. We allowed, without push back, the courts to so rule against the most important factor in our lives, God. And the instigators of evil will quickly learn that God is indeed real, as well as Satan.

It is better to form that notion NOW, before it is too late. When your pastors dilute the Bible, flee that church without delay. My wish is that all pastors would preach like Dr. Michael Spaulding of Ohio or Pastor Rob Pue of Wisconsin, who preaches the truth and Biblical accuracy in living. They are both columnists for my website: www.revaustinmiles.com.

I urge every reader to get back to church and to invite others to come to church with you. We must see the churches filled again on Sundays, and we must at least glance through The Bible during the week. It is only through the church that mankind will become intelligent again, be conscious of integrity, regard for others, charity, faithfulness in marriage and total honesty in all dealings. THEN God can again put His Hand on our shoulders and our country. THEN can we again be under God's protection.

It is up to you readers. Find a true Bible Believing Church and encourage others to come with you. Wake up! How can one be so stupid as to vote into public office Muslims who hate the U.S. and live only to see its destruction while putting America under Sharia Law.

Democrats are the "agents" of Satan which should be obvious by their decisions. Please wise up and never vote again for one to be elected to government office. Be fully aware during the 2020 elections, if, we get that far before the end.

America is currently under God's judgment due to our sins that can be seen all around us. Our enemies now have an advantage over us since we allowed this to happen through our ignorance and bull-headedness. We can and must change our lives today.

We must begin taking steps to correct this carelessness for the sake of all, especially our families. This can all be turned around if we make an earnest confession of repentance. Get back to church, and determine to live a life of honesty.

God has rightfully judged us and lifted His Hand from our protection. We can get that back. It is entirely up to us. Even though this columnist feels like a voice crying in the wilderness, it is hoped that many will hear this warning and prepare.

Rev. Austin Miles is the author of the popular book, God and Animals-What the Bible says about Heaven and Animals. Available at AMAZON.