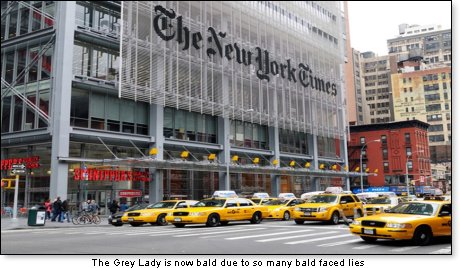 There was a time when Journalism was a sophisticated and respected occupation. Journalists were accurate, made sure the facts were straight and.... were highly respected. If a journalist was your guest at the dinner table, all the neighbors would talk about it. This would have meant you had arrived to have such an important guest at your table. This includes reporters and columnists from your local newspaper.

I can remember the time in the Empire State when, if a New York Times writer would come to your apartment, this would be the talk of all public people with a subtle implication that you had arrived.

We all relied on news reporters to give us accurate news. They were in the know, we thought. But today? NO. We are given false, and slanted news to persuade readers to come to their way of thinking and yes, they are pledged to change the way that we think. So instead of being classified as reporters, they should be classified as simply persuaders. As an example, take a look at the political news.

The news today is like the cotton candy at the carnival. It has a lot of fluff, but no substance. Notice how they refer to a man and his wife as a man and his partner. Well, "partner" instead of spouse, husband, wife, fiance, is LGBT language, meaning a same-sex 'couple.' Indeed every couple today are "partners" and we the public are using their language to indicate to them that we support their homosexuality, which is the point.

This is what the democrats want to enforce. They intrude into our minds by correcting the way we talk and think. A couple is a man and a woman....period. It is a man and his wife, or fiance, or even girlfriend. Not today. News currently is used to manipulate people into accepting their views (the liberal reporters) and immoral life styles by changing our language which will be forced upon us so that we comply.

Deceptive obituaric headlines are certain to be clickbait. How many times have headlines declared the demise of Clint Eastwood? That of course pulls in readers. However, Eastwood is very much alive at the age of 90.

You will see, "Sad News of Meghan Markle ".......you click on and learn that this royal misfit is pulling back from public life and marketing a new miracle skin cream, which disgusts the Queen. This is the most frequent deception behind invented death proclamations to market a product...mainly skin cream.

You see the current headline of, for instance, the last words of Prince Charles making readers believe he died when he did not. It goes on to describe Meghan's new beauty cream she is hustling , which was not pleasing to the Royals.

Here is that deceptive headline: "PRINCE CHARLES' CHILLING LAST WORDS." This has nothing to do with Prince Charles but everything to do with Meghan. What clattertrap butchering of word meanings to gain readers.

Yep, everyone whom we are led to believe has deceased is only bait for a new skin cream pitch by the VIP or their offspring.

Clint Eastwood has been imagined dead for the last several years with headlines that we are saying "goodbye" to him along with 'his last words." His 'last words,' are still being heard.

The internet does today provide real stories of fact. My website, www.revaustinmiles.com, publishes seven extraordinary citizen journalists who totally fill you in on the news. One journalist a day. Among those is Kelleigh Nelson, of whom every writer looks up to. Her research is astonishing. When you read her take on the news of the day, you get real news and facts and learn what is REALLY going on. And the people respond, as they read a different columnist a day, bringing our reader-count to: over 8 and a half million.

Other writers on my website include Coach Dave Daubenmire who really tells it like it is, Don Boys, a previous member, of the Indiana House of Representatives, Rev. Michael Bresciani who has a prophetic news site, Greg Holt a fine citizen journalist, Rob Pue who publishes a Christian newspaper, Jerry Newcombe who is seen on TBN TV. Plus one even has a Sunday Sermon from Rev. Mike Spaulding which is perfect in this era of pandemic distancing and we're told to stay home. This way we can still have a church sermon.

Check my website everyday and you will learn exactly what the real news is.

Even so, The New York Time does have some valid use for those with a caged bird, plus, considering the limited stock of toilet paper during this pandemic, The Times can be essential.