Anne Garboczi Evans
The woman behind the jail bars

June 12, 2014
Meriam Ibrahim is a twenty-seven year old Sudanese doctor. Her husband, Daniel Wani, is an American citizen and New Hampshire resident. Imprisoned since February with their one-year-old boy and unborn baby, Meriam spent her pregnancy shackled in a one-room cell. Last month, Sudan sentenced her to death because she's a Christian. They've also mandated 100 lashes for sexual relations with her husband. Since her husband is a Christian, Sudan doesn't recognize the marriage and won't let the children leave the jail to be with him. 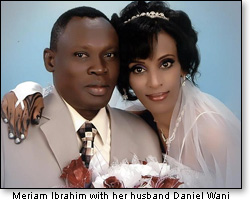 Gabriel Wani, brother of Daniel Wani, explained what 100 lashes mean. A strong man with a whip doles out the punishment. Male prisoners are stripped before the whipping. Female prisoners start off with clothing, but the brutal lash soon tears them apart, leaving the woman bare-backed as the whip "takes skin" off. After a hundred lashes some die, while others hover "in bad condition" until they are executed.

Daniel and Meriam's first meeting reads like an episode from GSN's new reality dating show, "It Takes a Church." Meriam attended church with Gabriel's sister in Sudan. In 2011, a church member heard that Meriam needed a place to live and called up Gabriel's sister. Meriam moved into her house and when Daniel traveled to Sudan to visit his sister in 2011, Meriam and he immediately became friends. Gabriel tells of many Skype calls and emails in the following months as his brother corresponded with Meriam from New Hampshire. The wedding was a church affair attended by the congregation that brought Daniel and Meriam together.

The couple's children, eighteen-month-old Martin and newborn Maya, are U.S. citizens. Yet, the U.S. State Department has so far refused to recognize their citizenship.

Martin's confined to one room where his mother is shackled and caring for a newborn alone. He's very aware of the prison environment and Daniel Wani described how, in the last four months, his son has gone from a cheerful little boy to a kid that can't even smile. Gabriel Wani sent Martin clothes and toys through an organization. With affection in his voice, Gabriel described how little Martin loves phones and any other electronics he can find. So Gabriel sent his little nephew a Tablet to help make the prison days go more quickly.

When asked what Americans can do to help his sister-in-law, nephew, and niece, Gabriel Wani asked that they contact their representatives and ask them to urge President Obama to call the Sudanese president. If President Obama makes the phone call and tells the Sudanese president that Sudan needs to respect freedom of religion, Gabriel believes that could make all the difference for Meriam, Martin, and Maya.

Anne Garboczi Evans is an author with Hartline Literary Agency. She is currently working on a world religions book entitled, No Fear: My Tale of Hijabs, Witchcraft Circles, and the Cross.

July 14, 2014
My neighbor the terrorist: a Cinderella story