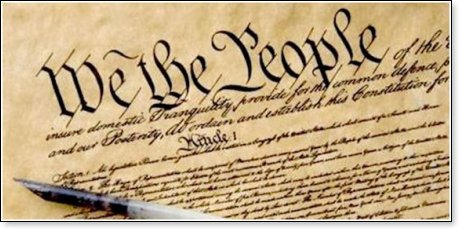 We the People are not authorized to amend the American Declaration of Independence or the Ten Commandments, because even our most intelligent law makers, judges and administrators are inferior to Natural and Divine Law. We are, however, authorized to amend Constitutional Law, because secular law is inferior to the Law of Nature and Nature's God. Some are of the absurd and irrational opinion that our Founding Fathers would not want us to amend the Constitution, but if that were true they would not have written Article V into the U.S. Constitution. In his 1788 letter to George Turberville, James Madison, Father of the U.S. Constitution, stated:

"I am not of the number if there be any such, who think the Constitution, lately adopted, a faultless work. On the Contrary there are amendments which I wished it to have received before it issued... These amendments I still think ought to be made according to the apparent sense of America and some of them at least I presume will be made." James Madison

In this letter James Madison made the case against a second general Constitutional Convention because the U.S. Constitution had just been ratified five months earlier, and he didn't think it wise to start the entire project over from scratch, but he was a vigorous supporter of State-sponsored Article V Constitutional Amendments, because the States created our Federal Government and are thus empowered to defend We the People against one that might become dangerously and un-Constitutionally over-powered.

"This Assembly doth explicitly and peremptorily declare, that it views the powers of the federal government, as resulting from the compact [U.S. Constitution], to which the states are parties; as limited by the plain sense and intention of the instrument constituting the compact; as no further valid that they [federal government] are authorized by the grants enumerated in that compact; and that in case of a deliberate, palpable, and dangerous exercise of other powers, not granted by the said compact, the states who are parties thereto, have the right, and are in duty bound, to interpose for arresting the progress of the evil." James Madison – 1798 Virginia Resolution

"The course & scope of the reasoning [1798 Virginia Resolution] requires that by the rightful authority to interpose in the cases & for the purposes referred to, was meant, not the authority of the States singly & separately, but their authority as the parties to the Constitution., the authority which, in fact, made the Constitution; the authority which being paramount to the Constitution was paramount to the authorities constituted by it, to the Judiciary as well as the other authorities [Congress and President]. The resolution derives the asserted right of interposition for arresting the progress of usurpations by the Federal Government from the fact that its powers were limited to the grant made by the States [U.S. Constitution]... The mode of their interposition, in extraordinary cases, is left by the Resolution to the parties [States] themselves... It is sometimes asked in what mode the States could interpose in their collective character as parties to the Constitution against usurped power. It was not necessary for the object & reasoning of the resolutions & report that the mode should be pointed out. It was sufficient to shew that the authority to interpose existed, and was a resort beyond that of the Supreme Court of the U. S. or any authority derived from the Constitution." James Madison – 1834 Notes on Nullification

When Federal government is placed back into its smaller non-God-like box – when Federal government receives only 10% of our labor – the States, empowered and limited by their own 10% taxation, would find themselves positioned to take over, or share with private charities, all social programs now un-Constitutionally administered by Federal government: Social Security, Healthcare, Education, etc., thus limiting Federal power to that which serves all Americans equally, such as the U.S. Military, Post Office, Federal Highways, NASA and the CDC. Limiting Federal taxation to 10% would have the effect of resurrecting the 10th amendment – resurrecting State government – resurrecting the Bill of Rights – resurrecting the U. S. Constitution. With such an amendment We the People will finally become masters of both Congress and the Courts, masters of our own destiny.

Section 1. The Declaration of Independence is the supreme un-amendable Natural Law of the United States of America

Section 5. The State legislatures in 3/4 majority or greater, the authority which created the Federal Government via the U.S. Constitution, shall have the power to revoke Supreme and Federal Court decisions, Federal Law, and Presidential executive orders outside the scope of military Commander-in-Chief

Section 12. Article III, Section 3 shall be changed to: "Treason against the United States, shall consist only in levying war against them or against this Constitution, or in adhering to their enemies, giving them aid and comfort. No person shall be convicted of treason unless on the testimony of two witnesses to the same overt act, or on confession in open court. The Congress shall have power to declare the punishment of treason except for cases of treason involving the President of the United States, members of the National Congress, or the Supreme Court, where in those cases the States shall have the power to try and declare the punishment of treason by 3/4 majority, but no attainder of treason shall work corruption of blood, or forfeiture except during the life of the person attainted.