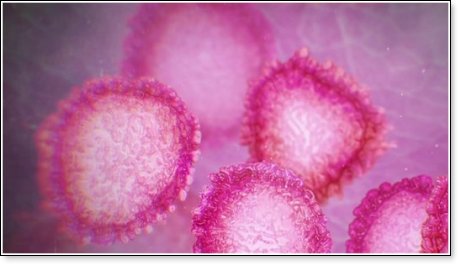 Similar to SARS, the current Chinese Coronavirus, known as 2019-nCoV, is transmitted from person to person by close personal contact, and also believed to be readily transmitted by respiratory droplets and aerosols produced when an infected person coughs or sneezes. The CDC informs us that the Chinese epidemic "reportedly had some link to a large seafood and animal market, suggesting animal-to-person spread," but some believe 2019-nCoV might be a Chinese bioweapon. University researchers in India have concluded that the genetic similarity between 2019-nCoV and HIV is " unlikely to be fortuitous," evidence that it was genetically engineered, and therefore likely leaked out of the Wuhan BSL-4 microbiology research laboratory.

Exponential expansion of an infectious disease occurs when the rate of growth is proportional to the number of people currently infected. The mathematical formula for exponential growth is:


"xt" refers to the total number of cases, "xo" the number of index cases or the number of cases at the time of mathematical calculation, "r" the rate of disease transmission (the number of people infected by each prior case), and "t" the number of incubation time intervals during the course of an epidemic. Since patients don't easily transmit the virus after recovery or death, the equation should reduce closer to xt = x0 (r)t.

This graph demonstrates the exponential expansion of 2019-nCoV, as of 1/27/20, using data from the Chinese government: 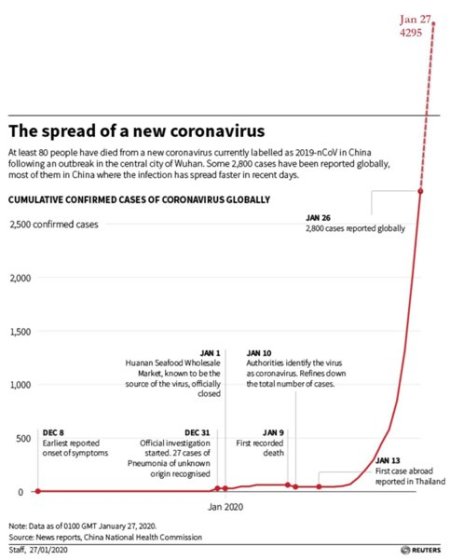 In the current 2019-nCoV epidemic "r" has been estimated by an international team of university researchers to be 3.8, and the best estimate for incubation time is 4-5 days which occurred in earlier Coronavirus epidemics known as SARS and MERS. Read et al. have estimated that only 5% of Chinese cases have been detected and reported, but if we assume that 3 out of 4 cases remain in the incubation period, asymptomatic, but still contagious toward the end of incubation, we can estimate the current number of cases to be 96,000 rather than the 24,000 currently acknowledged by the Chinese government. Are they counting 2019-nCoV cases with pneumonia as simply pneumonia, placing artificial limits on diagnostic testing, lying about the mortality rate, or unable to ascertain the total number of cases and the true mortality rate? This estimate may be low.

Huang et al., reporting in The Lancet on a cohort of 41 nCoV patients hospitalized in Wuhan, observed that all developed bilateral pneumonia, 32% required admission to the intensive care unit, 29% developed respiratory distress, 12% developed ischemic cardiac injury, 10% required intubation and mechanical ventilation, and 15% died. Read et al. have mathematically predicted about 200,000 cases in China on February 4 using an estimate of 11,341 cases on January 21 and an "r" of 3.8. Using a more conservative "r" of 3.0, an incubation time of 5 days (for contagiousness rather than for symptoms), and a current number of 96,000 cases (72,000 undetected and unreported) there would be about 864,000 cases by February 15 and over 200 million cases by March. Chinese government data indicate a 2.1% mortality, but using the 10% fatality rate in SARS, which I believe more likely, and realizing the absence of a Coronavirus vaccine, there could be up to 20 million deaths in China by March. Gabriel Leung, Dean of Hong Kong School of Medicine, estimated last week that there are about 44,000 cases of 2019-nCoV in Wuhan. If true, we could expect to see 100 million cases in China by March. Let's hope and pray that the actual mortality rate is far less than 10%. The following graphs compare the infection and death rates between 1029-nCoV, SARS and Swine Influenza. It appears from Chinese government data that 1029-nCoV may be worse, both in contagiousness and mortality, realizing that the true scale of this epidemic may be much worse. 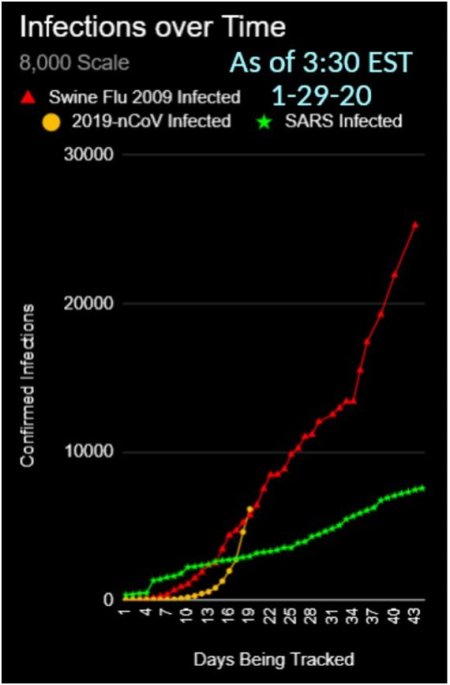 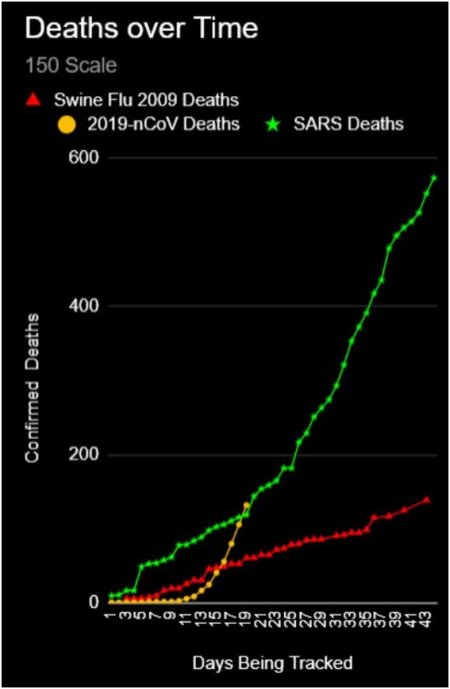 These numbers are extremely disturbing, but of course depend upon the accuracy of current estimates for disease transmission, incubation time, mortality rate, and an accurate appraisal of unreported cases. The case numbers could be reduced with strict quarantines and travel restrictions, if the mortality rate is less than 10%, the "r" value less than 3.0, or the incubation time greater than 5; of course the numbers might be higher if the Chinese government is underreporting its cases, the "r" value is greater than 3, the incubation time less than 5, or if the mortality rate is closer to 35% as seen in MERS. If these estimates are accurate, or even in the right ballpark, it would be wise to quarantine all people arriving in the United States from 2019-nCoV epidemic areas for 14-21 days, hospitalizing (in quarantined hospitals) any with signs or symptoms of 2019-nCoV. American Airlines, Delta and United have suspended all incoming and outgoing flights with China, along with British Airways, Air France, Lufthansa and others. Russia, Mongolia and North Korea have closed their borders with China.

We should be prepared, as best we can, for a large and possibly massive epidemic, because without drastic measures to prevent their entry, people infected with 2019-nCoV are likely to enter the United States during the incubation phase of their illness, undetected by temperature screening, looking well with no fever or symptoms. This Coronavirus can be transmitted from person to person anonymously and unawares, rendering case tracking impossible, thus creating conditions for an uncontrolled epidemic. According to Dr. Anthony S. Fauci, director of the National Institute of Allergy and Infectious Disease, as reported in the New York Times, "It's very, very transmissible, and it almost certainly is going to be a pandemic." Dr. Fauci also stated "It's escalating... the number of cases are accelerating... there are probably a lot more people who were infected in China who have not really been counted... the number is probably much higher."

A large majority of people infected with 2019-nCoV develop a flu-like illness, sometimes severe and requiring hospitalization, where a third need treatment in an intensive care unit (ICU) where mortality has been measured at 15%. If 2019-nCoV becomes a pandemic, even with 2% mortality, considering the 8 billion people on Earth, it could become a terrible calamity. Let's pray the actual mortality rate is not 16% and total deaths were not 24,589 on Feb 2nd instead of 304, as indicated in a now deleted internet post by Tencent, a Chinese government-controlled multinational conglomerate holding company. With 16% mortality, barring immediate mass vaccination and wide distribution of effective anti-viral therapy, the 1029-nCov pandemic could become the worst calamity in world history.

The World Health Organization declared 2019-nCoVa global emergency, the U.S. Federal Government has declared this epidemic a public health emergency, and the CDC recently confirmed, in Chicago, the first person-to-person transmission of 2019-nCoV in the United States; expect many more without aggressive measures to stop it. Unfortunately we are vulnerable because no vaccine is available, and there may not be enough anti-viral medication to go around. President Trump should stop entry of all people arriving from epidemic areas, and bring home a large contingent of overseas troops, stationing them on our Southern Border along with National Guard units in order to protect us.