Rev. Mark H. Creech
A nation with a character deficit

October 14, 2009
In his book, Character and Destiny: A Nation In Search of its Soul, the late Dr. D. James Kennedy tells about a speech given by Gary Bauer at the 1994 Reclaiming America for Christ Conference. Though Bauer's speech was given 15 years ago, its content is most relevant even today. 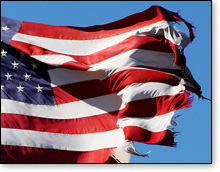 Bauer said that most Americans fail to understand just how removed lawmakers typically are from the values of the people they represent. He said many believe that government can create a utopia on earth. They believe that morals are relative and not absolute. They argue for a radical individualism, yet also demand that a strong central government be in control of every area of life. Bauer said the people of this country believe very much in personal responsibility, truth, virtue, and faith, but the "elites" in government want something of a new world order which isn't impeded by tradition or religious conviction.

Bauer said, "I know that all of us worry about the economy...We worry about having decent jobs and a living wage, and the chance to own a home and educate our children." But economic worries, continued Bauer, are not the biggest problem. "I am not worried about America economically; I'm worried because something seems to have gone wrong with the heart and soul of our nation. And millions of our fellow Americans know that something has gone wrong, even if they don't share our faith perspective. You can hear them talk about it at school-board meetings, at the grocery store in their neighborhoods; all of them know something has gone wrong. And our leaders...don't have the answers. They don't even know the right questions to ask."

Bauer also noted that when Martin Luther King, Jr. made his famous speech on the Washington Mall, he argued that his dream was that this country would one day judge its citizens by the content of their character and not the color of their skin. But most unfortunately, the government, the media, and the liberal education establishment, are telling our nation's children that character is irrelevant. Bauer said that this fraud perpetrated on the nation's next generation is a violation of King's dream, and that those who send this message to our young people, whether directly or indirectly, should be ashamed.

Bauer asked: "What happened in America between the time that we understood personal responsibility and a time when there are a thousand reasons to escape the consequences of our acts?" Then Bauer said, "What happened in America is that we forgot God. And having forgotten God, we have unleashed the hounds of hell in our streets, in our homes, and on our children. And until America realizes that, there is no turning back."

Whether it's state or federal government, the focus today is still erroneously on the economy. But as Bauer concluded in his speech, the real problem in this nation is not the economy. "A nation unable to distinguish between right and wrong," said Bauer, won't solve the budget deficit. "A nation of moral misfits eventually will become economic misfits. The economy and our moral fiber are linked together, and the politicians just don't get it."

What is more, few things better demonstrate this disconnect than the nation's current fiscal irresponsibility. The government today is very much like a man who grabbed a handful of credit cards and ran to Europe, Hawaii and the Caribbean, charged up an insurmountable debt, knowing he was going to die before he could ever repay it, and then simply passed the debt on to his children and grandchildren. Most would be incensed at such behavior as fundamentally immoral. Yet this is exactly what the government has been doing. 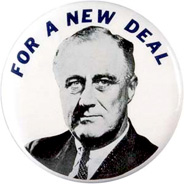 Of course many will respond, "But what about the poor? How do we care for them? Isn't that a moral issue too?" Indeed it is, but one might answer such questions with a question. How did we care for the poor before Lyndon Johnson's "Great Society" or even before Franklin Roosevelt's "New Deal"? Did the poor die in masses from exposure and malnutrition? Of course they didn't. Again, the nation's character was the key before such government intervention as it relied on families, churches and charities to serve the needs of the poor.

In fact, this nation's fiscal irresponsibility has undermined the nation's character all the more by negatively impacting the poor, creating dependency on the government, resulting in fatherless homes, promoting unwanted pregnancies that end in abortion or single parent households, and unemployment. Much of the social pathology of the day was considerably less widespread before the government started trying to spend its way out of poverty.

It's of no small consequence the first and last commandments of the Ten Commandments are: "Thou shalt have no other gods before me," and; "Thou shalt not covet." Until America once again acknowledges God as God and not the government as god, and unless the nation repents of its covetous spirit, which sees all of life in the context of what one possesses, then there is little hope for any permanent relief from what threatens to completely undo us. Unless the country becomes as concerned about its character deficits as it is its budget deficits, its doom is sealed.


Rev. Creech gratefully acknowledges that he has drawn from Character and Destiny by D. James Kennedy (Zondervan, 1994) and a sermon by Terry Johnson titled, The Kind of Government We Need, from Election Day Sermons (Kuyper Institute, 1996) for the writing of this op-ed.