Rev. Mark H. Creech
A nest of them: a soul-winning story

December 8, 2012
Archie Ratliff, currently the pastor of Bethel Free Will Baptist Church in Kinston, North Carolina has rightly said, "David Paramore is one of the greatest leaders that the Free Will Baptist denomination has ever known..." In my estimation, Ratliff understates the case. Paramore, who previously pastored Bethel before retiring and has never had a national following, nevertheless, I believe is on a scale with the great preachers of yesteryear like D.L. Moody and Billy Sunday. He was my pastor during my formative days of spiritual maturation and everything I strongly believe about doctrinal integrity, a passion for souls, and showing moral courage as a minister was modeled for me in him.

I am not a Free Will Baptist today, but a Southern Baptist. Still, Paramore is paramount in my mind as the kind of minister that makes a mark for eternity.

Not long ago, someone brought me a copy of his recent autobiography, To God Be the Glory: Sketches from the Life and Ministry of David Paramore. I sat down and read it with sheer delight, devouring every page. But there was one humorous story in the chapter, Soul-winning Stories, that not only made me laugh but also just as reflective.

In that chapter, Paramore tells about an experience with one of his parishioners, Clifton. Clifton was a hard-working welder with a personality that could be abrupt and direct, yet, he was also a man of deep and tender affections.

As Paramore tells it, One Sunday morning in the late 1960s after preaching a message on soul-winning, Clifton came to him and said he wanted to go soul-winning with his pastor. 'Preacher, I know where there's a whole nest of them,'" Clifton excitedly told Paramore. So he and Clifton set out one day together to find "a whole nest" of people who needed the Lord.

While on their way to a local crossroads, Paramore says that Clifton flagged down an old pick-up truck. He thought maybe Clifton was trying to warn the man about something being wrong with his pickup or perhaps he had been trying to get up with him about some matter unrelated to their plans for the day. "I was wrong," says Paramore. Clifton looked at him and said, "Preacher, this is our first prospect. I know this man; he needs to get saved. You talk to him." Paramore says he got out of the car to greet the man and couldn't help thinking, "My goodness...right here on the side of the road in front of a nice brick house?"

Clifton then boldly escorted the man to the tailgate of his own truck, saying to his friend, "Bill, you need to be saved. This is my preacher, and he's going to tell you how." Paramore sat down beside the man on the tailgate and "with cars whizzing by," he showed him from the Bible how to commit his life to Christ. "Bill bowed his head and asked Jesus to save him." Later Paramore would baptize the man, who would become a faithful follower of the Savior.

After Clifton, Paramore, and Bill got off the tailgate of the truck and said their goodbyes. Paramore says he noticed someone looking out the window of that nice brick house. "Although I was thrilled that Bill had just gotten saved," said Paramore. "I was also relieved that we were getting into our car before the folks in that house called the law on us for disturbing the peace or trespassing."

That's when Clifton pulled into the driveway of the brick house (to turn around, Paramore thought). But Clifton cut off the engine and said, "Preacher, these folks need to be saved." Paramore says he couldn't believe they were actually walking up to the front porch of this brick house, where only minutes before someone had been curiously peering out the window at them. A lady answered the door and Clifton called her by name. "This is my pastor," Clifton said, "and he's here to tell you how to be saved." The woman responded, "Clifton, I'm saved, but my husband's not. Ya'll come on in." Her husband came in from another room and sat down, says Paramore. Clifton reiterated their purpose for the visit, but the husband side-stepped the issue, saying, "Clifton, I'm glad you came, but I'm a Methodist." Clifton retorted, "That' don't matter. God can save you anyway."

After the Gospel was presented to him, the man decided that despite his church affiliation he really didn't know Christ. Some years later this same man was stricken with a terminal case of cancer and Paramore went to see him on his deathbed. The man gratefully reminisced about that pivotal day when Paramore came by to see him and he gave his heart to the Lord.

Paramore says he thought the day's visitations would end after leaving the nice brick house. But instead of going home as he expected, Clifton drove his preacher to see one more — this time one of Clifton's relatives — a man Paramore had witnessed to on several occasions before with no success. When the man answered the door, Clifton got right to the point. "Joe," Clifton said, "You've messed around long enough, and if you keep on, you're going to Hell. You need to get saved." Joe then hesitated for a moment and said, "I reckon you're right. Ya'll come on in." Within a few short minutes of the visit, Joe had prayed to receive Christ.

The chapter concludes with Paramore recalling, "Clifton and I finally made our way back to the church." He "had led us to the nest...and the Lord had blessed. Before Clifton passed away years later, he was used of the Lord time and time again to bring souls into the kingdom."

I must confess that after years of study I have not read anything more precious. I have laughed and even shed tears at the audacity of the story. It's a tale of the power of simple faith and simple obedience. Though some might recoil at its lack of sophistication, it conveys the heart of the evangel.

It is said that Karl Barth once came to the United States to present a series of lectures at Union Theological Seminary in Richmond, Virginia. Following one of the lectures and a time of discussion, a student asked the renowned theologian, "Dr. Barth, you are the most preeminent theologian in our century. You have changed much of the course of theological understanding in our generation. Could you in a single sentence summarize the essence of your theology?" Barth paused, seemingly in deep thought, and said: "The essence of my theology is this: 'Jesus loves me this I know; for the Bible tells me so.'" 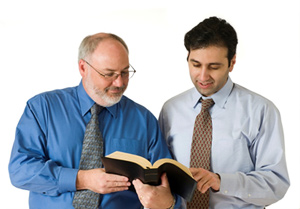 Yes, that's the plain, unadorned, unfussy, unpretentious message that changes the world. It's the same message that will save our nation from its moral free-fall. It's the one that declares that God loves sinners, Hell is real, Jesus saves and changes lives, and eternal life is granted freely to those who believe.

The need of the day is not so much the gift of eloquence, the prestige of education, or the power of personality. The need of the hour is for Christian men and women like Clifton and Pastor Paramore who have the mettle and passion to share that simple message.

Rev. Creech gratefully acknowledges all quotes in this article were taken from, "To God Be the Glory: Sketches from the Life and Ministry of David Paramore," which is a self-publication, pgs. 212-214, 2004.