March 8, 2014
Someone once said, "I don't understand Christianity. I don't understand electricity either, but I don't intend to sit in the dark until I do." That's a profound statement about the power of faith to transform a life. The intelligentsia typically renders such assertions as foolishness, but it's been God's plan through the ages.

In 2 Kings chapter 5 is this incredible story about a leprous commander of the Army of Damascus, who learns through a young servant girl of the marvelous acts of the prophet Elisha. Naaman seeks out the prophet to have his leprosy healed. Elisha declines to see Naaman, but sends word for him to bathe in the Jordon River seven times. Naaman is angered at the command and thinks it beneath him and utterly idiotic. Nevertheless, he is persuaded by his companions to obey in faith. After washing the seventh time, Naaman is cured and becomes a worshipper of the God of Israel.

Obviously, Naaman didn't understand. He thought being directed to wash in the waters of the Jordan as a cure for his disease ridiculous. Still, Naaman wasn't willing to sit in the dark any longer. He decided to move in faith. Even though his faith was small, he trusted God and the result was a new life.

In his epistle to the Corinthians, the apostle Paul elaborates on this principle, saying:


Dr. Jerry Vines in his book, God Speaks Today, tells the story of a man who was skeptical of the power of the Gospel to fundamentally change a person's life. He just believed some folks needed a little help pulling themselves up by their bootstraps and then they should determine to live as good as possible. So, says Vines, this man committed to help a friend who was struggling with alcohol. "I'm going to help you overcome this challenge," the skeptic told his friend, and he actually moved in to assist him. When the man who abused alcohol was tempted to drink, the skeptic would prevent him from going to a nearby bar and watched him constantly.

Vines recalls: "As he was telling me the details, he looked me in the eye and said, 'Then one afternoon the strangest thing happened. A group of Christians came to see my friend. They gathered around him, read him some Bible verses, and then they all got on their knees. He got on his knees and prayed to invite Jesus Christ to save him. You know, my friend doesn't even want a drink anymore. It's the craziest thing I've ever heard of, but it works.'" [1]

No doubt the alcoholic had only scant knowledge of the doctrines of Christianity, but evidently he was tired of sitting in the dark and with simple faith walked into the light, thereby gaining a brand new life. Moreover, the transformation of the man's life convinced the skeptic of the power of faith to save.

In his book, Random Reminiscences, the late Dr. Henry Ironside shares a story about a time when in San Francisco he spoke at a Salvation Army meeting. He gave his testimony of the way his faith in Christ's death and resurrection had transformed his life. Afterward, a well-dressed man came forward and politely handed Ironside a card. Ironside recognized the gentlemen as one of the leading socialists of the day – a man who had made a name for himself arguing for socialism and against Christianity. When Ironside turned the card over, he read, "Sir, I challenge you to debate with me the question, 'Agnosticism versus Christianity' in the Academy of Science Hall next Sunday afternoon at four o'clock. I will pay all expenses."

Ironside agreed to the debate, but with conditions. He said that his challenger should bring with him at least two persons, a man and a woman, both of which had lived a life of destitution, whether an alcoholic, whether criminal or sensual – two persons who were basically characterless outcasts, slaves of their evil passions, and ruined by their poor choices. Ironside said that if his challenger could find two such persons and they were willing to share how agnosticism had rehabilitated them and won their way back to an honored position in society, resulting in virtuous lives; then he would come to debate. But Ironside promised that when he came, he would also bring with him 100 men and 100 women who for years had lived just as he had previously described, but whose lives were gloriously and permanently altered because of the Gospel this man was well-known known for ridiculing.

At this, Ironside's challenger waved his hand in a depreciating manner and said, "Nothing doing!" [2]

This is the point. There are those who say they cannot believe the Bible. They say it's not academic. They contend no intelligent person could ever accept its claims. They say they don't understand and it makes no sense. Therefore, they refuse to believe. 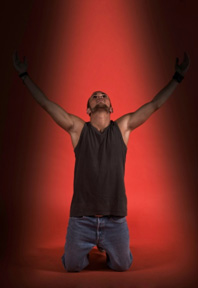 But what of all the evidence of the power of Christ to completely transform a person's life? What about the thousands upon thousands of people who for centuries have said, "I once was blind, but now I see"? Can the testimony of these millions around the world be easily dismissed? – the alcoholics – the homosexuals – the sexually perverse – the murderers – the thieves – the extortionists – the gambling addicts – the drug addicts – the prostitutes – the prideful – the materialistic – the cruel – the many who are characteristically lawbreakers – all made anew by a simple act of faith in Christ. Is it a sensible act to carelessly cast to the wind such proofs? Hardly!

If you have never surrendered your life to Christ, let me invite you to consider the reality of the overwhelming evidence of lives changed by the Gospel. If you think about it for a moment, you probably know someone like this in your own circle.

You may not understand everything about Christianity, but there is no need to sit in the dark until you do. Believe and come into the light. Be changed forever.