May 4, 2014
There are certain people in the evangelical community for whom I have profound respect. I feel more a student of their knowledge and expertise than a peer. Such is the way I regard Albert Mohler, president of Southern Baptist Theological Seminary in Louisville, Kentucky. Mohler, in my estimation, is a spiritual and intellectual giant in our time. I don't see myself as someone worthy to even unlace his sandals. 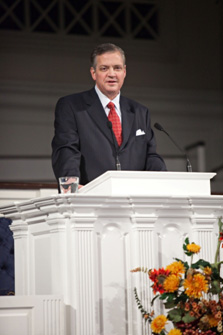 But recently (Tuesday, April 29) on his daily broadcast called "The Briefing," Mohler erroneously maligned North Carolina's Marriage Protection Amendment (MPA). The great preacher and theologian seemed to be taking his cues from a New York Times article that was egregiously misleading about a novel approach by the United Church of Christ (UCC) to knock down the state's MPA on the basis of the First Amendment.

The lawsuit alleges that N.C.'s MPA violates the religious liberty of churches like the UCC that want to perform same-sex weddings. Mohler cited the New York Times piece as saying "the denomination argues that a North Carolina law that criminalizes the religious solemnization of weddings without a state-issued marriage license violates the First Amendment." He also mentioned David C. Clark, Jr., general counsel for the UCC who argues clergy members in the state that perform "religious blessings and marriage rites" for homosexuals "are subject to prosecution and civil judgment."

Mohler then went on to add, which was the crux of his concerns, that he is a strong defender of traditional marriage, but believed North Carolina's MPA went to an extreme by addressing the behavior and speech of clergy. His concern was that the UCC, under such circumstances, would have a good argument in court, and the prohibition of any celebration of same-sex marriage in their churches could also result in faithful churches supporting traditional marriage ultimately being forced to perform same-sex weddings.

The trouble here, however, is the New York Times got it wrong, and consequently Mohler's alarms about the Tar Heel state's MPA and its alleged infringement on religious liberty were completely unfounded. As a matter of fact, North Carolina's MPA says just the opposite. The state's MPA actually reads:


"Marriage between one man and one woman is the only domestic legal union that shall be valid or recognized in this state. This section does not prohibit a private party from entering into contracts with another party; nor does this section prohibit courts from adjudicating the rights of private parties pursuant to such contracts."


It's obvious from such clear and precise language that N.C.'s MPA in no way restricts the religious liberty of any faith group. It says nothing about what ministers or their churches can or cannot do. The amendment simply clarifies the state's sovereignty to recognize marriage with all its legal rights and privileges is to be defined only as between a man and a woman. It does not bar contracts and other means private parties may agree upon. How much plainer could the amendment possibly be? None!


"Solemnization without license unlawful. No minister, officer, or any other person authorized to solemnize a marriage under the laws of the state shall perform a ceremony of marriage between a man and woman, or shall declare them to be husband and wife, until there is delivered to that person a license for the marriage of said persons, signed by the register of deeds of the county in which the marriage license was issued or by a lawful deputy or assistant.

"Every minister, officer, or any other person authorized to solemnize a marriage under the laws of this state, who marries any couple without a license being first delivered to that person, as required by law, or after the expiration of such license, or who fails to return such license to the register of deeds within 10 days after any marriage celebrated by virtue thereof, with the certificate appended thereto duly filled and signed, shall forfeit and pay two hundred dollars ($200) to any person who sues therefore, and shall also be guilty of a Class I misdemeanor."


Mohler argued N.C.'s marriage statutes were problematic or potentially problematic in that they essentially declare ministers "must not bless what the state has cursed." He contended the state should never be directing the way ministers or churches carry out their professed religious duties. His remarks were partly correct. The state shouldn't be telling ministers or people of faith how to practice their religion. Nevertheless, his conclusions about the state's marriage laws are in error, as were his comments about the N.C. MPA.

In an article titled, Laws Defining Marriage as Union of Man and Woman Do Not Violate Religious Liberty, Ryan T. Anderson of the Heritage Foundation discusses N.C.'s marriage laws and rightly interprets them, maintaining:


"This law isn't talking about ministers celebrating marriages in churches solely for religious purposes, but about ministers who are acting as agents of the state to celebrate a state recognized marriage. But, again, there's no religious liberty right to have the relationship of your choice recognized as a marriage by the state. And there's no law preventing churches from celebrating marriage however they see fit."


I wouldn't bother to point out Mohler's mistakes in this situation, except his influence is far and wide. In my estimation, he is the E.F. Hutton of Southern Baptist life. What he says carries a tremendous amount of weight. And, unfortunately, he drew from a liberal and biased newspaper to wrongly criticize and defame North Carolina's MPA, indict those who crafted it, and argue evangelicals ought to be troubled.

The next day he partially corrected his course in his second briefing on the subject. (Wednesday, April 30). He revised his statements on the amendment, but still hadn't seen the light on the state's marriage statutes and held them in question. In his second briefing, he also noted that he had contacted N.C. House Majority Leader, Paul "Skip" Stam, as a more reliable source of information than something like the New York Times. But wouldn't Mohler have done better to have contacted the people who worked on North Carolina's MPA – members of the executive committee of N.C. Vote for Marriage (a committee on which I served) – or at least even contacted Paul Stam – before launching an attack on the credibility of the state's marriage amendment or its laws by saying they could negatively impact religious liberty? The assertion is nonsense.

All of this matters because Dr. Mohlers words unintentionally provide fodder for the enemies of marriage that this issue is about religious freedom, a First Amendment matter, when it is not. In fact, that claim is nothing more than a legal fiction on the part of the UCC.

Make no mistake, the real question is not religious freedom for these people and their cohorts, it is the redefinition of marriage! And for those of us in North Carolina who have been fighting to protect marriage as one man and one woman for a decade, it's no help when an individual of Mohler's stature in the evangelical camp wrongly associates the redefinition of marriage with the free exercise of religion.

Mohler's remarks were a critical error. They were like tearing open a feather pillow in the midst of a great gust of wind. One may try to clean up the feathers afterward, but one will never succeed in removing all of them from the landscape of the debate.

Perhaps a lesson to be gleaned from these unhappy circumstances is the need to be exceedingly careful that in our zeal to right a perceived wrong we don't inadvertently create another wrong – something I earnestly pray I haven't done in faulting Dr. Mohler – someone for whom I have intense admiration and respect.