June 7, 2014
A week ago, I had the privilege of participating in a whirlwind speaking tour across the Tar Heel state with a new developing organization known as the North Carolina Pastors Network. The program featured speakers Tami Fitzgerald of the North Carolina Values Coalition, Jere Royall of the North Carolina Family Policy Council, Bobbie Meyers of the Carolina Pregnancy Care Fellowship, Randy Wilson of Watchmen on the Wall (Family Research Council), and "yours truly" of the Christian Action League. The mission of the effort was to get pastors to engage the culture and connect them to the leading Christian public policy groups in the state, as well as the national organization the Family Research Council, all of which exist to assist them in doing so.

Tami Fitzgerald, who led the campaign for the passage of a Marriage Protection Amendment to North Carolina's Constitution in 2012, was the first speaker. Fitzgerald gave a comprehensive presentation of the status to keep marriage as one man and one woman. She listed the many attacks on marriage in both the federal and state courts. She talked about a campaign by gay activists that encouraged register of deeds in the state to break the law and provide marriage licenses for same-sex couples.

As Fitzgerald gave her speech, you could see Randy Wilson listening with intensity, squirming and fidgeting in his seat, shaking his head, his eyes burning with fire, his lips pressed into a scowl. He was angry at what he heard and when he followed Fitzgerald to the podium, he admitted his indignation at some of the things he learned from Fitzgerald's report.

At one point, Wilson said, "As I listened to Tami's speech, I couldn't help but get angry. It makes me wonder, what country are we living in? Is this really the United States of America? What are we leaving to our children and grandchildren? It makes me angry – angry enough to want to do something about it."

Anger is not a response typically accepted as legitimate in today's culture. We're supposed to have a more sophisticated reaction. We should always speak with finesse, devoid of any emotional outburst. To do otherwise is considered taboo and worthy of the label "extremist," so it's believed.

Although I am not one given to anger, I couldn't disagree more. There is a place for righteous indignation as demonstrated by Jesus on occasion. In fact, the absence of such anger can be symptomatic of a relationship with God that has faltered.

Christ's cleansing of the Temple is a perfect illustration of a righteous anger. As Jesus observed the way God's House had been corrupted, with premeditation he fashioned a whip, drove out the money changers and threw over their tables filled with dishonest gain, shouting, "The Scriptures teach that God's House is to be a place of prayer, but you have made it a den of thieves" (Matthew 21:12-13).

To the modern eye, this is undoubtedly one of the most provocative and disturbing pictures in the Gospels. If it were anyone else but Jesus, the critics today would claim the man had distorted the issue by losing his temper, and thereby contradicted the very principles for which he supposedly stood. He would be accused of sinister motives, or of hypocrisy, or having lost his mind.

But the fact of the matter is Jesus demonstrated that there is a place for a burning ardor – a fiery passion – a zeal that moves one to do something about an apparent grievance. This fury is not based in selfish motives, but borne out of a love for God – a love for his way – a holy enthusiasm for justice.

When I was in college, I spied a petite dark skinned girl with coal black hair, irresistible brown eyes, and the brightest smile I had ever seen. Even though we had never dated, I was already in love with her. I was enamored with everything about her person. One day a male classmate spoke to her with malice and deeply hurt her feelings. In a flash I was in his face, daring him to speak to her in that manner again. My rage was like a flame that nearly consumed me. That young woman would later become my wife of thirty-five years. My classmate's maleficence was the stimuli revealing the level of my fervor for her.

Jesus was this way about the glory and goodness of God. He showed jealousy for God's name and love for the divine. He couldn't simply stand-by and watch the very One He adored the most being defamed. His affection for God's order was too powerful to be silenced or made impotent in the face of flagrant falsifications.

The story of Jesus's cleansing the Temple is not a pre-text to be used in the name of revolution or violence. Nevertheless, it does show the power of a rightly directed thunder. Jesus was righteously outraged and it moved him to a proper action.

We need more of this in our day. I think we saw something akin to it when Duck Dynasty's Phil Robertson was fired from the popular A&E show for expressing biblical views that condemn homosexuality. Christians were fuming mad about Robertson's termination and voiced their complaints loudly in various ways to the Network. The result was Robertson's rehiring. Unfortunately, however, such a response is more the exception rather than the rule in a culture where ire for all things moral seemingly has died.

Compare the Robertson situation to a much greater injustice recounted by Matthew Staver in his book, "Take Back America." Staver says that while a friend of his was visiting the Holocaust Museum in Jerusalem, a lady approached him and asked if he was a Jew. He informed her that he was a Jew who had become a Christian. She then started to weep, and said that during the Holocaust years she lived within sight of the Nazi incinerators. Every morning, she said that she could smell the stench of burning flesh. As she wept, she said in her broken voice, "I did nothing. I am so very sorry – I did nothing." [1] 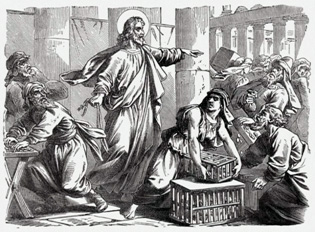 There is no greater indictment to a lack of love than indifference. Christians who treat the current degeneracy and depravity of our culture, the evil corruption in high places, the diminishing of religious liberties, in a tepid fashion, need a fire for God stocked in their souls.

During the last event of the speaking tour with the North Carolina Pastor's Network, Wilson said he was glad he didn't have to listen to Fitzgerald's presentation again. All of us on the team had a good laugh because we understood the way it would anger Wilson each time.

There is a holy anger. And, may God hasten the day when a righteous indignation moves his people to so impact the world around them for Christ's sake that we hear less and less concerning the advances of evil.