October 11, 2014
The US Supreme Court's decision to deny review of all marriage cases striking down state constitutional marriage amendments has produced considerable sadness for people everywhere who believe marriage should always be defined as one man and one woman. Linda Harvey, president of Mission America, likened their action to that of Saul of Tarsus, who held the cloaks of others during the stoning of Stephen. Justices from the High Court figuratively held the robes of the justices in the lower courts, while they stoned the great institution of marriage.

Make no mistake; our nation is experiencing a new form of tyranny. There is absolutely nothing – nothing in the Constitution of the United States forbidding a state from preserving the traditional view of marriage in law. What's happening in our nation is nothing less than a pure ideological power play by liberal judges who wish to force a new vision on our country. They despise traditional morality and want to overturn the historical understanding of marriage. The so-called right to same-sex marriage is wholly an invention, pulled from mid-air, and imposed on the Constitution and the citizens of the United States largely by abuses of judicial authority.

Our nation is a Republican form of government, which means we are governed by elective representatives and by a leader such as a president, rather than by monarchs or dictators. Supreme power in America belongs to the people – a people entitled to vote – entitled to vote for elected officers who exercise their will by crafting laws – measures signed into law by the executive branch, and then adjudicated by the judicial branch. Despite arguments to the contrary, there is no law that mandates government recognition of same-sex marriage that has followed this process in the affected states.

Those that worked to protect and preserve marriage have followed the law, but there is no relief for law-abiding citizens who have faithfully followed due process, if their leaders are complicit with despotism and lawlessness. In our nation's Declaration of Independence, the founders clearly articulated the God-given right to resist abuses of power. Therefore, just as surely as the US Supreme Court turned a blind eye to the invectives of authority below them, Governors, attorneys general, and legislative leaders of the affected states should ignore the dictates of black-robed tyrants who are holding marriage and the will of the people in contempt. Moreover, steps for impeachment ought to be seriously considered.

If these justices may from their seats on high hand down edicts redefining something of such fundamental import as marriage, they can redefine anything – absolutely anything! While some claim we are witnessing the workings of a more perfect union, the fact is a delusion is occurring that is moving us in the opposite direction. We are instead becoming victims of an oligarchy – an oligarchy that by overturning the will of the people on marriage is setting the stage for attacks on our most cherished freedoms such as religious liberty, freedom of speech, and property rights. These assaults are already occurring where same-sex marriage has been legalized by judicial fiat.

With 11 new states, now my own, North Carolina, falling to same-sex marriage, ultimately bringing the expected total to 30 in the U.S., many will contend the fight to preserve marriage as one man and one woman is essentially over. Hardly! There is every reason to believe our nation will discover soon enough this issue has never been about "marriage equality." Instead, it's been about changing the entire legal paradigm for marriage and the way this will result in the coercive power of government forcing people to validate in public and personal life what is egregious to their own consciences. It's been about growing the size of government, expanding it into the heart of society's central entity, the family, where it has generally been resisted. Like never before, this new legal paradigm will result in numerous unforeseen and confusing legal scenarios, negatively affecting couples in divorce proceedings, children and custody issues, adoption issues, etc. Unfortunately, even those committed to a traditional view of family life will not be exempt from the storms that will ensue. Some may scoff at these assertions, nevertheless, in time the truth will come out, forgive the pun, and support for same-sex marriage will start to decline. 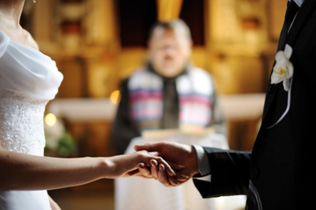 Moreover, it should be noted the church must do a better job of articulating, promoting and defending biblical marriage and its many benefits. There is plenty of guilt to pass around, with some church leaders and denominational groups committing the greater sin of abandoning sound doctrinal teaching on the subject. Since the very dawn of creation, marriage between a man and a woman has been the bedrock of human social structure. For pastors and church leaders to be derelict on marriage is the same as to be hireling shepherds who allow predators to devour the nation.

Over five thousand years of history are abundantly clear, civilizations that turned from a strong marriage ethic, including Babylonian, Roman and Sumerian empires, began to experience demise shortly thereafter. It is not hyperbole to say nearly every social problem our nation currently struggles with can be traced to a break-down in family life.

May it be proclaimed from the roof tops. Marriage belongs to God. It is a right of mankind defined and graciously granted from him. Church and state are but its stewards. Therefore, government must know, citizens must understand, and churches must declare that when a nation infringes upon God's rights, they are subject to lose their own.

God save America. God save the great state of North Carolina.