February 1, 2015
During a recent radio interview on an Iowa-based program, former Arkansas Governor, and Fox Television host, Mike Huckabee, expressed his shock at the way some women used profanity in the workplace in New York. He said he heard two women dropping "f-bombs" during a filming of his Fox News Show.

"In the South, or in the Midwest, there in Iowa, you would not have people who would just throw the F-bomb or use gratuitous profanity in a professional setting," Huckabee told his host. "In New York, not only do the men do it, but the women... My gosh, this is worse than locker room talk. As we would say in the south, that's just trashy."

Huckabee is right about profanity being "trashy" talk. He says he wasn't saying anything derogatory about the people at Fox News, but simply trying to point out the coarseness of conversation that is quite widespread in places like New York, Washington, and Hollywood. He's right about that too.

Nevertheless, in this culture of relative morals, profanity is quickly becoming quite prevalent everywhere. It's used regularly, habitually, by men, women, and youth with little or no hesitation. It's not considered a big deal. Still, just as a physician can tell a great deal about a person's health by examining their tongue, one can discern much about a person's spiritual well-being by the way the tongue is used to communicate.

Jesus put it this way, "For out of the abundance of the heart, the mouth speaketh" (Luke 6:45). If our hearts are polluted, then "trashy" speech patterns show up.

What defines profanity? The Bible doesn't provide a prohibited vocabulary list, but it does contain guidelines that assist in avoiding speech that displeases God.

Words become profane when sacred meanings are treated in a trivial fashion. This could have many applications such as taking God's name in vain (Ex. 20:7), falsely taking an oath in God's name (Lev. 19:12), or accentuating an affirmation with an expression such as "by God." It may also refer to other crude utterances like, "Oh my God!" or "Lordy mercy" and "Jesus Christ!" The Greek word "bebeloo" is translated "profane" twice in the New Testament (Mt. 12:5; Acts 24:6), essentially meaning to take something highly revered and desecrating its sanctity by identifying it with what's common.

The Scriptures also prohibit "filthy" talking (Eph. 5:4), which involves telling obscene stories and coarse jokes. "Filthy" talking in Ephesians chapter 5 could be accurately paraphrased as "trashy" speech. It's the same kind of language that flouts moral standards. Prohibitions against similar forms of communication would include "lascivious" speech (2 Peter 2:18) – words or dialogue designed to conjure up unwholesome sexual images.

Moreover, profanity involves "cursing," which is to utter a malevolent imprecation upon someone. Wayne Jackson in Profanity – A Biblical Assessment writes: "It finds a modern vent in such phrases as, 'You go to hell!' or 'Damn you!' It is important to note at this point that neither of these terms, 'hell' or 'damn,' is inherently evil. There is a proper context in which they are permissible. Jesus spoke of that sort of person who is 'a child of hell,' and the Great Commission warns that those who believe not 'shall be damned.' It is the manner in which such terms are employed – i.e, hatefully, vindictively, in a pejorative fashion that makes the use of them wrong." [1]

Ephesians 4:29 beautifully summarizes these principles when it instructs: "Don't use foul or abusive language. Let everything you say be good and helpful, so that your words will be an encouragement to those who hear them."

Although many are unwilling to recognize it, the use of profanity can really be a big deal. According to Cuss Control Academy, an organization in Lake Forest, Illinois, that incidentally has no religious affiliation and gives presentations about how to eliminate profanity from the workplace; contends, "swearing" imposes both personal and societal penalties. For the individual user, it endangers relationships, discloses a lack of character, reflects ignorance as well as immaturity, and creates an overall bad impression. It often turns discussions into arguments that can lead to violence. James V. O'Conner, president of CCA, contends: "Our reluctance to restrain our impulses and to make the effort to be polite is contributing to a coarser, less civil society." [2] 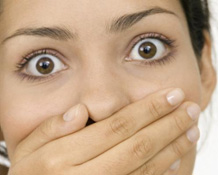 The Apostle James in the third chapter of his epistle said nature has no confusion in her ways. A fountain has either salt or fresh water. A fig tree bears figs, not olives; the vine bears grapes and not figs. But man, the highest of God's creation, is conflicted. There's something wrong in his inner being. And the fact that he blesses with one breath and curses in the next is evidence of it.

Colonel Harland Sanders of Kentucky Fried Chicken fame used to have a problem with profanity. He said he could never get control until he turned his life over to the Lord. The secret of a governable tongue is not self-control, but Christ control.

On another 911 in New York, but during 1995, a squirrel climbed onto the Metro-North Railroad power lines. This set off an electrical surge, which weakened an overhead bracket, which let a wire dangle toward the tracks, which tangled in a train, which tore down all the lines. As a result, 47,000 commuters were stuck in Manhattan for hours. Sometimes, it can be the seemingly little things of life that have more significance than one would have ever imagined.

Profanity may be more commonplace than ever before, but when expletives easily roll off the tongue, it's not inconsequential. Words have remarkable powers. Someone has said, "To blow a spark will cause it to burn. To spit on it will put it out. Both are from the mouth." Just a small word can be either advantageous or adverse.

Whether it's New York, Washington, Hollywood, or the tiniest town in the country, the prevalence of "trashy" talk is evidence of the need for God's cleansing of hearts.