February 28, 2015
Matthew 16:25 reads, "For whosoever will save his life shall lose it: and whosoever will lose his life for my sake shall find it." These words by Jesus are found in each of the four Gospels with minor additions and variations. Whenever words are repeated this way in Scripture, it's a signal that God is stressing something critical – something he doesn't want to be missed. The obvious point emphasized here is that the true Christian experience brings with it the necessity of sacrifice.

For many years, Christians in America lived most comfortably under the umbrella of values derived from its rich Judeo-Christian heritage. America, however, is now in a post-Christian era and the climate is growing increasingly hostile to Christian principles.

In 2003, David Limbaugh, brother of renowned radio political commentator, Rush Limbaugh, wrote a book chronicling discrimination against Christians in American society. In his book, "Persecution," Limbaugh argued that he wasn't writing to imply that other groups weren't subjected to discrimination, but the difference was whenever other groups experience it the popular culture decried it. When it came to anti-Christian discrimination, the culture's attitude was more apt to be, "Yes, please do shut up those Bible-thumping idiots!" [1]

Limbaugh's book recounts real stories of harassment and oppression of Christians in a variety of contexts: the public sector, the private sector, the mainstream media, in Hollywood, the public education system and institutions of higher learning. The discrimination is often fostered by activist judges that misinterpret the law and the constitution. Moreover, it frequently finds life in the political correctness of the day.

One of the consequences of Christian maltreatment today is that the lines between nominal Christian profession and genuine Christian profession become less blurred. To profess Christ and to authentically follow Him as Lord in a period of easy morality, broadmindedness, and suppression of faith is likely to be costly. The irony is the harder the times the more clearly authentic expressions of Christianity are apt to be seen. Some excellent examples have risen to the forefront most recently.

Aaron and Melissa Klein, owners of a bakery in Oregon politely and graciously refused to make a wedding cake for a lesbian couple, citing their Christian beliefs against same-sex marriage. The lesbian couple then filed a complaint with the state. The Kleins were found guilty of violating the Oregon Equality Act of 2007 and face hundreds of thousands of dollars in fines.

Gay rights groups have launched protests against the Kleins and picketed their store, even intimidating other wedding vendors that would do business with them. Their children have been the targets of death threats. They've had to close their bakery and operate their business out of their home. Yet they have remained firm to the principles of their faith, releasing a statement that read, in part:


"To all of you that have been praying for Aaron and I, I want to say thank you. I know that your prayers are being heard. I feel such a peace with all of this that is going on. Even though there are days that are hard and times of struggle we still feel that the Lord is in this. It is his fight and our situation is in his hands...Please continue to pray for our family. God is great, amazing and all powerful. I know he has a plan." [2]


In October, HGTV announced a new reality TV series set to debut with twin brothers, David and Jason Benham. The twins who were adept to flipping houses with good profit and were going to demonstrate the ways people could purchase an older home and transform it into their "dream home." But HGTV cancelled the program before it could even start after RightWingWatch.org labeled the Liberty University graduates as "anti-gay, anti-choice extremists." In response, the Benham brothers published a statement saying:


"The first and last thought on our minds as we begin and end each day is; have we shined Christ's light today? Our faith is a fundamental calling in our lives, and the centerpiece of who we are. As Christians we are called to love our fellowman. Anyone who suggests that we hate homosexuals or people of other faiths is either misinformed or lying. Over the last decade, we've sold thousands of homes with the guiding principle of producing value and breathing life into each family that has crossed our path, and we do not, nor will we ever discriminate against people who do not share our views.

"We were saddened to hear of HGTV's decision. With all of the grotesque things that can be seen and heard on television today you would think there would be room for twin brothers who are faithful to our families, committed to biblical principles, and dedicated professionals. If our faith costs us a television show, then so be it." [3]


Barronelle Stutzman, a florist in Washington State and Southern Baptist grandmother, kindly declined to provide flowers for a long-time customer who was planning a same-sex marriage ceremony. Thus, her state set out to punish her and her business.

Alliance Defending Freedom Attorney, Kristen Waggoner, said the Attorney General of Washington state had used "the full power of his office to personally and professionally destroy her." [4] Moreover, Waggoner said gays and lesbians were setting Stutzman up by inundating her business with requests to provide flowers for gay weddings. Waggoner said each time they came into Stutzman's business she would get tagged with a $2000 fine. Plus, legal fees were expected to run into seven figures. [5]

Recently, the state's Attorney General offered to settle with Stutzman, saying if she would just pay the fine of $2000 for her first offense, a $1 payment for costs and fees, and agree not to discriminate in the future, her problems would be over. [6]

But Stutzman replied in a letter to the Attorney General, "You are asking me to walk in the way of a well-known betrayer, one who sold something of infinite worth for 30 pieces of silver...I certainly don't relish the idea of losing my business, my home and everything else that your lawsuit threatens to take from my family, but my freedom to honor God in doing what I do best is more important." [7]

These people have shown a depth of faith and commitment to Christ rarely seen by the masses in this country. They've laid it all on the line for Christ's sake and they're example is most redemptive. In an age when the lost multitudes are searching for a faith that's real, and many professors and not necessarily possessors of the Christian religion are traveling the broad road of life instead of the narrow one Jesus said leads to life eternal, these people have shown what it's really all about.

Matt K. Lewis, a senior contributing editor for TheWeek.com, argues the culture war is over and conservatives have lost. Some conservative evangelicals have concluded the same, but such assumptions are presumptuous. It is impossible to know what God will do to save a nation. What is more, no matter how seemingly hopeless the circumstances, the battle will never cease until God makes all of Christ's enemies his footstool (Psalm 110:1,4; Hebrews 10:12,13). The history of the church has always been one of moving forward and then back, forward again and then back, but with each forward the ground gained is greater overall.

Nevertheless, Lewis is right when he argues the current antagonistic environment to Christianity might have a silver lining. He writes:


"The peak of 'Christian America' was probably the 1950s, and while this era had a veneer of spirituality and perhaps the post-war evangelical movement was at its apogee, America was plagued by the ugly reality of racism, which goes against the gospel. In many ways, the 1950s was a gilded age. While a lot of Americans presented themselves as Ward Cleaver, they drank and philandered like Don Draper. 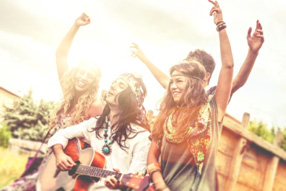 "In the 1960s and beyond, the rejection of Christianity was a logical extension for young people rebelling against the culture's sterility and their parent's phoniness. This was an ironic turn of events for a faith that began as a very revolutionary, counter-cultural movement about sacrifice and suffering. But at some point, rather than being a dangerous choice, Christianity became the perfunctory, convenient, de rigueur even, choice of lemmings – and the way to gain the approval of the phony establishment, not unlike joining the Elks Lodge upon moving to a new town...

"It is in times like these – when there is a stark cleavage between the world and believers – that Christianity typically grows and rediscovers its purpose." [8]


Indeed, it may be that the days of ostensible Christianity are on the way out, while the days of legitimate profession are on the way in. But it is from that projection this author also takes hope – he takes hope in the conviction that when Christians live out a valid Christian profession, it transforms the world around them, and, therefore, the effort to restore America to its religious moorings may still be won.

It cost something to be a true follower of Jesus. The times are starting to reveal this dynamic again. Sacrifice is at the heart of the Christian faith and such is required of those who would honor and obey the Lord and make a difference for his sake.

Jesus said in each of the four Gospels, "For whosoever will save his life shall lose it: and whosoever will lose his life for my sake shall find it." (Matthew 16:25). Whether literally or practically, whether for the individual or for corporate reasons, life given away for Christ's sake is life saved, life saved for one's self is life lost.