March 9, 2015
Friday, March 6, on the eve of the 50th anniversary of the historic march on Selma, Vice President Joe Biden, addressed the Human Rights Campaign Spring Equity Convention in Washington, and asserted, "Selma and Stonewall were basically the same movement."

Drawing various parallels to civil rights protestors who fought segregation in the South, the Vice President reflected on the number of southern states where gay marriage is still prohibited and encouraged homosexual activists to take the South.

The Vice President demonstrably criticized former neurosurgeon and possible 2016 Presidential candidate, Ben Carson, for saying he thought homosexuality was a choice. "Every ridiculous assertion from Dr. Carson on, I mean, ridiculous," Biden said. "I mean, Jesus, God," he added.

Maybe we need to start calling Uncle Joe, Guncle Joe, from now on. But then again, that wouldn't exactly fit him because he isn't really a gay uncle. Of course, the Human Rights Campaign (HRC) might be willing to make him an "honorary gay uncle." Or, maybe the Vice President could just declare himself gay, since being gay means understanding what being gay means to you. Admittedly, the title doesn't fit perfectly and it would be a little confusing, but then again, what's not confusing about the gay lifestyle?

Certainly gay activists love Guncle Joe's rhetoric, but anyone with a sensible understanding of civil rights will just chock it up to another of the Vice President's many gaffs.

Walter Fauntroy, a black civil rights leader who actually marched with Dr. Martin Luther King Jr., once stated the difference between the two movements. He said, "The essential difference between the Black civil rights struggle and the gay rights struggle, is that Black people are discriminated against on the basis of something we cannot change, our race; gays are discriminated against on the basis of their behavior, something that can be changed." [1]

No doubt, Guncle Joe and his ilk would claim that being gay is not a choice any more than one's skin color is a choice. Except the difference here, again is that sexual behavior is always a choice, when race is never a choice. The color of one's skin is benign. Sexual behavior is not. The law shouldn't be concerned with personhood, but it must be concerned with conduct.

Monday, March 2nd, the City Council in Charlotte, North Carolina, took up a proposed ordinance that would have included enumerations of "sexual orientation," "gender identity," and "gender expression" as legally protected categories for the LGBT community. Such ordinances considered in other larger cities such as Houston, Texas, Fayetteville, Arkansas, and Cleveland Ohio," have resulted in a firestorm of opposition. Policies of this kind can place citizens, small businesses and religious groups whose beliefs, traditions and morals which are at odds with making homosexuality equivalent to race, subject to certain legal consequences. Moreover, because they allow a transgender person to choose the public restroom with which they best identify, sexual perverts have used such ordinances to prey on vulnerable women and children.

During the public comment period on the bill, more than a hundred people spoke, with over 60% voicing opposition.

One astute speaker, Dr. Michael Brown, host of the daily, nationally syndicated radio show, "The Line of Fire," a Jewish man, said he had conversed with some of the proponents of the measure who were demonstrating outside the government building and asked them, "What if I am convinced to the core of my being that I am black? Then I was told that I am black," said Brown. "I guess if there were minority housing rights, then I should be allowed them," he argued facetiously.

Brown referred to the proposal as a form of "social collaborative madness."

I'll say. People like Guncle Joe, who make blackness and gayness equal remind me of the scene from the classic movie, "The Jerk," featuring comedian Steve Martin, sitting on the front porch of an old black farm house, saying, "I was born a poor black child."

Martin's character is the adopted white son by black sharecroppers. He grows up naively unaware of his adoption. He can't understand why he doesn't have rhythm like black folks when they play and dance to blues music. The movie depicts a preposterous situation of a man who fails to understand his real personhood. 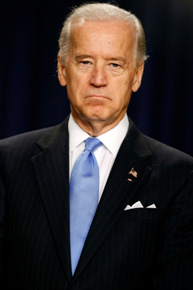 No black person can ever be white any more than a white person can be black. You can't lose or abandon race, but plenty of people caught up in homosexuality have certainly left it. And the many who have ditched it indicated they were able to do so when they finally realized gayness wasn't the essence of their personhood. [3]

What an insult to God to say that we are something other than what he really created us. We're either born male or female and are meant to express our masculinity or femininity in a way consistent with God's creation. [4]

If these words sound brusque, let me say in their defense that they are genuinely driven by a righteous indignation. When the Vice President of the United States embraces and touts such foolish arguments at the expense of real civil rights, at the expense of the social chaos resulting from making homosexuality equivalent to race, at the expense of the people who will lose their own souls because they believed their imprudent leaders, I say, yes, "[e]very ridiculous assertion...I mean ridiculous...I mean, Jesus, God," save us from Guncle Joe and this kind of lunacy.