April 4, 2015
I'm always amazed at God's timing, his providential allowance of events at certain times and the way they can speak to us.

As we approached the Easter holiday this year, religious liberty was betrayed for the paltry silver of corporate interests by those who were supposed to be its disciples, unjustly tried in the court of public opinion, condemned by a mob, exchanged for the Barabbas of sexual liberty, and nailed to the cross of homosexual equality.

I have never witnessed anything more disturbing in American life – nothing more threatening to liberty in general to these United States. Religious freedom is our first freedom and without it no freedom is safe. Eric Metaxas has rightly stated:


"Real faith is never something that can be forced by the state. It's something that either is encouraged and smiled upon or discouraged and frowned-upon. Or, simply crushed, as it has been in every Communist country...Religious freedom, which was at the very heart of the Founders' vision for America, cannot be compromised without all our liberties being compromised and America as we know her being redefined into non-existence." [1]


There was no wrong in the Religious Freedom Restoration Act (RFRA) that was originally passed in Indiana and signed by its Governor, Mike Pence. It provided no license to discriminate against gays and lesbians. The bill was no trump card for abuses of the LGBT community under the guise of religion. It simply ensured that the courts must apply the same legal standard whenever state actions burden a person's freedom of conscience, requiring the courts strike a balance between compelling state interests and the freedom to practice one's faith.

Yet the leftist mob of gay activists and their cohorts and the media shouted in one loud and concerted voice, "Crucify it! Crucify it!" They placed a crown of damnable thorny lies around its beautiful head and scourged it with every dreaded accusation of homophobia until it was hardly recognizable any more.

Then came in the High Priest, the Scribes, the Sadducees and the Pharisees, the real power brokers of the day, the Big Corporations, who offered not up silver to betray religious liberty, but instead threatened to take much silver away.

What happened? The disciples of religious independence, it's supposed most ardent supporters, the Republicans, abandoned RFRA and fled as surely as the disciples of Jesus ran away when he was arrested. Pence sent the legislation back to be rewritten like Pilate referred Jesus to Herod, only to be returned and ultimately handed over to the will of his enemies. Under the influence of the wicked, RFRA's beacon of hope for the religiously oppressed was exchanged for a rod to beat the alleged incompliant Bible-thumpers against same-sex marriage into line.

Even in my own home-state of North Carolina, with two RFRA bills filed and waiting in the wings to be considered, in Peteresque fashion the GOP Governor claimed he knew not what RFRA was meant to accomplish, while Republican legislative leaders denied with equivocations that the legislation was a priority. Thus, the rooster crowed as they warmed themselves in the firelight of political expedience. 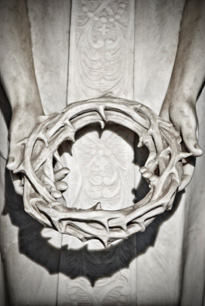 Make no mistake about it, the day is dark and religious liberty as it has always been celebrated in this country is dead. The thunder claps, the earth trembles, and voices from the past are heard to say, "Surely, this was true liberty."

Weep and mourn Jerusalem, shed tears ye people of God, for religious freedom now lies in the tomb shrouded by the grave clothes of "sexual orientation," "gender identity," and "gender expression." Hide away now behind the doors of your churches and within the closets of your personal religious opinions, lest the authorities at some point come for you.

But do not fall into complete despair, Sunday is coming. Whether three days, three years, or longer, the truth when toppled always rises to stand. Despite the centurions of political correctness and sexual debauchery placed at the mouth of the sepulcher to watch over its demise, the angels of liberty shall fly and one day roll away the stone. Religious liberty will rise again and the light of its glory shall afford all men the asylum, prosperity, and God-given autonomy they are actually due.

Then shall it be said, "It is risen. True liberty lives again."

Even so, O Lord, show mercy and grace. Let it happen quickly.