June 29, 2015
For many who still believe that marriage is defined by God as one man and one woman, today's decision by the Supreme Court to arrogantly redefine the institution comes as no real surprise. Nevertheless, no matter how deliberately we may have prepared our hearts for this day, it is still just as heartbreaking and every bit as egregious.

The 5-4 ruling by the High Court imposing same-sex marriage on the entire country strikes at the heart of marriage, which is our nation's most fundamental institution. It ignores our most basic form of government – Federalism. It grossly violates the separation of powers. It tramples over the will of more than 50 million Americans who voted to define marriage in their state constitutions. It threatens our country's first freedom – religious liberty. Most importantly, it defies Almighty God.

As Justice Roberts also rightly declared, "The truth is that today's decision rest on nothing more than the majority's own conviction that same-sex couples should be allowed to marry because they want to..." He continued, "This approach is dangerous to the rule of law. The purpose of insisting that implied fundamental rights have roots in the history and tradition of our people is to ensure that when unelected judges strike down democratically enacted laws, they do so based on something more than their own beliefs. The Court today not only overlooks our country's entire history and tradition but actively repudiates it, preferring only to live in the heady days of the here and now."

It is not just religious people who believe in the traditional view of marriage who should be disquieted, but every American concerned about the advent of lawlessness in our culture. In essence, this decision greatly destroys trust in the Judiciary. Two Justices who have been outspoken public activists for gay marriage did not recuse themselves before the High Court. This not only places their participation in violation of the Rules of the Court, but also brings their partiality into question. When Supreme Court Justices essentially shut down the political process on a matter of such fundamental import, when they overrule the will of the people, when they ignore the proper court procedure and set themselves up as the final authority, what is that but the same kind of tyranny fought against by the American Revolutionaries?

The ruling of the majority, written by Justice Anthony Kennedy, reads, "[I]t must be emphasized that religions, and those who adhere to religious doctrines, may continue to advocate with utmost, sincere conviction that, by divine precepts, same-sex marriage should not be condoned." Yet there is no real protection in such wording for religion's "free exercise." The decision's reference to religion and its relationship to same-sex marriage is broad enough to run a locomotive through. With such language, there can be no question church related agencies, schools, colleges; even the tax exemption status of various religious institutions will be dragged into court by gay activists intent on ending every vestige of opposition to their perversion.

Moreover, the court provided legal justification for referring to anyone, more specifically to Christians, who would work to preserve traditional marriage, as an effort that "demeans or stigmatizes gay people." Who would have ever thought our nation's highest judicial body would label people who insist, either by advocacy or the ballot box that marriage is between one man and one woman, as bigots. This is exactly what happened today. Nevertheless, as Frank Turek once eloquently argued in his book, Correct, Not Politically Correct: How Same-Sex Marriage Hurts Everyone: "Natural Marriage is the most valuable relationship in any civilization. That's not bigotry – that's wisdom based on evidence from five thousand years of human experience, the self-evident design of the human body, and the documented beneficial results of natural marriage to children, their parents, and our society."

It is not likely fire and brimstone will fall on America immediately because of this decision, although God would certainly be justified in doing it. Nevertheless, this national sin is more apt to bring its own punishments overtime. Although many will think it hyperbolic to say, the state sanctioning of gay marriage will eventually destroy traditional marriage. Real marriage (natural) and anti-marriage (same-sex) cannot coexist any more than can matter and anti-matter. Children will suffer from marriage being redefined as a genderless institution that purposely renders either a mother or a father as obsolete to child rearing. Homosexuality will be taught in public sex-education curriculums as normal. It will further stress our Healthcare and Social Security systems by adding hundreds of thousands of new dependents. These issues, plus the constitutional crisis and threat to the democratic process this decision ushers in, may prove to be too much and result in a national collapse beneath the weight of our own sin. 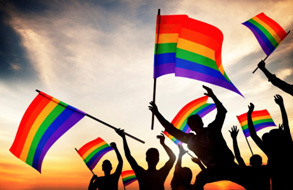 Contrary to the thinking of some, however, this is not the final word. The Great Judge of all the Earth, God, will have the final say. And, one may be most assured that he is not pleased with the Court's decision today. With or without our help, this decision will be overturned. If not overturned by the will of the people, it will be overturned by the One who gave us the model for marriage in the opening passages of the book of Genesis, and was affirmed by Jesus in Matthew chapter 19.

For those of us who have fought to preserve real marriage, we pledge ourselves anew to do battle against its counterfeit, same-sex marriage, on every level. We shall tirelessly endeavor to protect religious liberty and the "full exercise thereof." We shall not comply with such unjust laws, for to resist tyranny is to obey God. We shall pray. We shall preach. We shall prepare to use every righteous means available to overturn this injustice – no matter how long it takes.

God help us. God save our wayward nation.