July 3, 2015
The lady at the Cleaners where I take my shirts said to me as I was leaving, "Thank you, Rev. Creech, have a great Fourth of July." Her intentions were good, but her well-wishes deeply grieved me. I tried hard to muster a smile and say, "You too!" But it was overly difficult.

July 4th, Independence Day is supposed to be a day of celebration in America. I want to celebrate, but cannot find it in my heart to do so this year. Instead, I mourn.

On July 4th, 1852, Frederick Douglass gave his famous speech, "The Hypocrisy of the Nation Must Be Exposed." In reference to slavery, he said that to the slave the jubilation of Independence Day was "a sham; your boasted liberty an unholy license; your national greatness, swelling vanity; your sounds of rejoicing...your shouts of liberty and equality, hollow mock." He said such rejoicing to the slave was but "mere bombast, fraud, deception, impiety, and hypocrisy – a thin veil to cover up crimes..." [1]

The LGBT community would likely claim Douglass' words as their own, especially before the recent decision by the U.S. Supreme Court to legalize same-sex marriage. But to do so only turns civil rights on its head. Sexual desires do not constitute a right. Even when sex is between two consenting adults, there is no right to prostitution – no right to polygamy – no right to incest – no right to adultery – no right to pedophilia.

Yet the Supreme Court has endorsed same-sex relationships with the blessing of marriage and benefits from the state. This decision by the High Court not only corrupts marriage, but makes the celebration of freedom "a sham." It boasts of a "liberty that is an unholy license." It turns our "national greatness" into a "swelling vanity." It makes this year's Fourth of July's "sounds of rejoicing" and "shouts of liberty and equality" a hollow mockery, "mere bombast, fraud, deception, impiety, and hypocrisy." Freedom cannot be won or sustained on the premise of iniquity.

I realize that during this national holiday many would prefer that I be more positive or encouraging. Once again, I defer to the words of Frederick Douglass from the same speech, who expressed my sentiments exactly.

America has surely committed a crime – a great crime against "nature's God" or the "self-evident" "laws of nature" that are given by God and referenced by our Declaration of Independence.

Our country has sinned against the flag to which it pledges its allegiance. We are supposed to be a Republic. Our Constitution should be the rule of law. But the Constitution is constantly ignored by all branches of the United States Government, especially the Supreme Court.

Chief Justice John Roberts was entirely right when he said in his dissenting opinion in Obergefell v. Hodges that the court's decision in favor of gay marriage had nothing to do with the Constitution.

Are we really one nation "under God," when we exalt man's perceived or so-called rights above the eternal and absolute rights of the Almighty? Are we truly indivisible when we are divided over the most fundamental issues that made us a nation – the sanctity of every life – liberty – religious freedom?

By what due process do we deny the unborn their right to live? Are we truly free not to purchase health insurance? Is a photographer or a cake baker truly at liberty not to participate in a gay wedding? 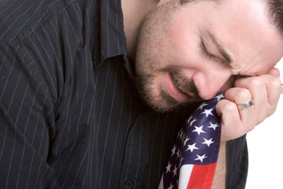 John Winthrop in his "City on a Hill" speech once warned America, "The eyes of all people are upon us. So that if we shall deal falsely with our God in this work we have undertaken, and so cause Him to withdraw His present help from us, we shall be made a story and a byword throughout the world." We are, most unfortunately, at that juncture and headed for its fullest realization. [3]

This being said, there truly isn't much to celebrate this July 4th. This year, among all the frivolity, fireworks, picnics, and patriotic ceremonies, at least for me, and I suspect millions of others, instead of merriment there will be a deep sadness.