July 18, 2015
Earlier this month, the New England Conference of United Methodist, a group of 600 churches spanning six states, approved a resolution calling for an end to the nation's War on Drugs. They believe the love of Christ constrains us to do so.

In part the resolution reads, "In the love of Christ, who came to save those who are lost and vulnerable, we urge the creation of a genuinely new system for the care and restoration of victims, offenders, criminal justice officials, and the community as a whole. Restorative justice grows out of biblical authority, which emphasizes a right relationship with God, self and community. When such relationships are violated or broken through crime, opportunities are created to make things right."

According to the Christian Post, Law Enforcement Against Prohibition (LEAP), a non-profit organization apparently based in Medford, Massachusetts, worked along-side the Methodists Conference to get the resolution passed.

The problem with the full resolution, however, is that it contains half-truths mixed with some of the same old myths about drug legalization, which most certainly have nothing to do with the love of Christ.

The resolution primarily asserts that the prohibition on drugs has failed. I have to agree with Theodore Dalrymple, who said in Don't Legalize Drugs, "If the war against drugs is lost, then so are the wars against theft, speeding, incest, fraud, rape, murder, arson, and illegal parking. Few, if any, such wars are winnable...The extreme intellectual elegance of the proposal to legalize the distribution and consumption of drugs, touted as the solution to so many problems at once (AIDS, crime, overcrowding in the prisons, and even the attractiveness of drugs to foolish young people) should give rise to skepticism. Social problems are not usually like that. Analogies with the Prohibition era...are false and inexact..." [1]

To pose the question of whether we are winning the war on drugs is like asking if the church is winning the war on sin. The answer is clear, we can anticipate the problems of sin always being with us, but we don't suspend God's commandments. To do so would only lift the stigma and shame of sin, proliferate its practice, as well as exacerbate its negative consequences.

Law is the role of government in promoting the good, while suppressing and judging evil. Government; says the Scriptures, "is the minister of God to thee for good...an avenger to execute wrath upon him that doeth evil" (Rom. 13:4). The government has a God-given calling to keep the public safe from harm, and that includes banning and enforcing laws against dangerous substances.

Let's turn the tables for a moment, if ending the War on Drugs, will actually lessen the incidences of death, disease, crime and addiction, as the Conference's resolution espouses, why didn't the same result occur when the Prohibition of alcohol was ended?

Recognizing again that making something illegal never eradicates its presence, if, therefore, the actual objective of Prohibition was to restrain and reduce alcohol's use and its negative consequences (and it was), then despite conventional wisdom it succeeded.

In His book, Booze, Bucks, Bamboozle and You, Ross J. McLennan notes that one of the most convincing proofs of Prohibition's success is the government reports that compare the use of alcohol before and after Prohibition. According to McLennan, in 1914 the per-capita use of alcoholic beverages was 22.80 gallons. In 1934, the first year after repeal, the amount was 8.96 gallons. In other words, the nation had been weaned away from drinking during the nearly fourteen years alcohol sales were illegal. And it took years of promotion by the alcohol industry to get consumption rates back up to their pre-Prohibition levels. [2]

Professor Mark Moore of Harvard's Kennedy School of Government noted in an article he wrote for the New York Times the positive public health and safety outcomes that came from Prohibition:

"Cirrhosis death rates for men were 29.5 per 100,000 in 1911 and 10.7 in 1929. Admissions to state mental hospitals for alcoholic psychosis declined from 10.1 per 100,000 in 1919 to 4.7 in 1928. Arrests for public drunkenness and disorderly conduct declined 50 percent between 1916 and 1922. [V]iolent crime did not increase dramatically during Prohibition. Homicide rates rose dramatically from 1900 to 1910 but remained roughly constant during Prohibition's 14 year rule. Organized crime may have become more visible and lurid during Prohibition, but it existed before and after." [3] 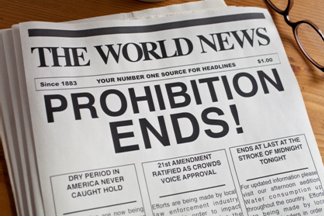 The point here is not to advocate for the return of Prohibition. Unfortunately, America is quite willing to pay the price for this luxury that costs us immensely in innumerable and incalculable social problems. But no one with any intellectual honesty would conclude we are better off since repealing the Prohibition of alcohol. Instead, matters are worse, even with the taxing of alcohol, the regulations and controls, and preventive programs. To think it would be any different if we ended the War on Drugs is the height of naivety.

In fact, ending the fight against drugs and legitimizing them by law will only compound our problems on top of the serious drug and alcohol-related issues we already have.

William J. Bennett, America's first drug czar, has wisely written, "It is a handy premise of many that we cannot stop people from using illegal drugs. It is a convenient argument that we need to legalize them, but that is surrender. It is surrender to murderous cartels, it is surrender to drug dealers, and it is surrendering our children to impaired, less productive, shortened, and possibly even disastrous lives." [4]

When churches surrender to what's revolting in the name of love, especially the love of Christ, then we're all subject to end-up in hell.

Poor John Wesley, the founder of Methodism, must be rolling over in his grave.