Rev. Mark H. Creech
Trump: that's no choice at all

February 20, 2016
James Lowell wrote in a poem, "Once to every man and nation, comes the moment to decide, in the strife of truth with falsehood, for the good or evil side."

But what happens when the choices seem to be equally bad – equally evil? As a conservative evangelical, that appears to be the dilemma for me, and perhaps many others like me, when faced with the prospect of a Hillary Clinton v. Donald Trump ballot for President in the General Election.

David French in the National Review noted in a recent article something of profound significance for conservatives to consider. He said the debate in South Carolina on Saturday, February 13th, should clarify the Trump phenomenon. He wrote: "After months of dominating the polls and millions of words of analysis, the grueling slog of the primary race is finally bringing the facts into sharp relief. Donald Trump isn't a revolutionary. He's not a conservative. He's not even a populist. He's a Democrat."

Regarding the Iraq War, French argues, "Trump made it quite plain that he believes the fever-swamp 'Bush lied, people died' narrative of the radical Left." That's clear from the transcripts.

On the funding of Planned Parenthood, French rightly points out that Trump argued that the organization should not be defunded because "Planned Parenthood does wonderful things." Granted, Trump qualified his statement later by adding, "but not as it relates to abortion."

Still, as French rightly contends: "These are standard Democratic talking points, intentionally designed to obfuscate the fact that when you pump hundreds of millions of taxpayer dollars into a business, you help the entire business – not just the portion funded. He knows that. Everyone involved in the debate knows that.... That's angry leftism, nothing more.... it's clear there is a Democrat in the GOP field."

Kareem Abdul-Jabbar, once a famous basketball player , and now a contributor to Time Magazine, nailed it when he recently wrote about Trump's "windshield-wiper party affiliation" switching from the Republican Party in 1999 to independent, "then to Democrat in 2001, then to Republican in 2009." That suggests says Jabbar, "either internal conflict on the issues or blatant pandering."

Then Jabbar rightly adds that Trump "favored the economic stimulus plan, the automobile industry bailouts, the bank bailouts and the assault weapons ban; he has called himself 'very pro-choice,' 'very liberal' and a backer of 'universal healthcare' on national television; during the 2012 campaign, he criticized Republican Mitt Romney's harsh immigration rhetoric."

Trump has certainly distinguished himself on the matter of illegal immigration. He's called for a border fence and pledged to make Mexico pay for it. How is he going to do it? He says, "Elect me. Put me in charge. I'll make things right." Surely something needs to be done and is long overdue, but in a Constitutional Republic such rhetoric smacks of despotism. As if such a complicated issue could be so easy, it's nonsense.

Bryan Fischer of the American Family Association has eloquently laid out Trump's deficiencies on his Christian profession and the social issues. "Trump has little to no familiarity with the Bible, as his 'Two Corinthians' gaffe makes clear. His favorite Bible verse – 'never bend to envy' is not even in the Bible," says Fischer. "He seems to use his childhood copy of the Scriptures as little more than a prop, much as Bill Clinton did back in the day when he'd wave a giant Bible in the air on his way out of church during the Lewinsky scandal.... Trump claims to be pro-life, but thinks his rabidly pro-abortion sister would make a great Supreme Court justice. He claims to be a defender of religious liberty, but thinks Kim Davis should have been thrown in jail. He claims to be a supporter of traditional marriage, but has said nothing about what he would do to protect it as an institution. We know nothing about what he would do to protect the rights of Christian bakers and photographers and florists who are being severely punished for supporting natural marriage as he claims to do."

This doesn't even take into account his embarrassing barrage of personal insults toward women, and anyone who disagrees with him.

Fischer adds that Trump is even less values-driven than either McCain or Romney was when they ran for President. He's right! 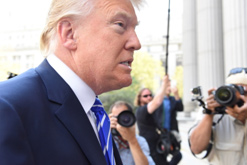 In 2012, I encouraged Christians who objected to a Romney candidacy because he was a Mormon to hold their noses and vote for him anyway. For those who contended they didn't want to choose between "the lesser of two evils," I contended that most often that was always the choice. Romney, at least in my estimation, was a far better choice than Obama.

This time, however, I can hardly see a hair's breadth difference between electing Clinton or Trump. Clinton is, I believe, a liar, and corrupt. The leftist policies she espouses would lead this country further and faster toward its demise. Trump is just a Democrat in Republican clothing. He offers nothing but promises and is the quintessential model for the very kind of politician he condemns.

I speak plainly and suggest that when the choice is no longer between which candidate is the best candidate, but instead between which will do the least harm to the country, for many conservative evangelicals, that's no choice at all.