August 22, 2016
In Psalm 1, the Psalmist provides a beautiful picture of a tree bearing abundant fruit because its roots continually draw nourishment from the river next to it.

"Blessed is the man that walketh not in the counsel of the ungodly...but his delight is in the law of the Lord," reads the Psalm, "He shall be like a tree planted by the rivers of water...whatsoever he doeth shall prosper" (Psalm 1:1-3).

Contrary to common thought man is not merely a highly evolved animal, but a creature specially created in the image of God. He has a soul that is dependent on God, his maker, as a tree is upon water. Large, vigorous, and meaningful life is granted to those who commune with God.

The South African writer, teacher, and Christian pastor, Andrew Murray admonished, "Do not forget that the aim God has in view in his grace and your redemption is to restore the broken bond of fellowship and love between him and the sinner. True religion consists in this, that the soul should find its highest happiness in personal communication with God."

A personal relationship with God, secured by turning away from sin and trusting Christ for forgiveness, cleansing, and the gift of eternal life, enlarges a person's range of spiritual vision. Better said, it provides sight to the previously blind and enables one properly to judge the issues of both this life and the next one. The "law of the Lord," the Word of God, upon which the believer delights, is the water of life supplying the wisdom by which to test the value of all things, whether they are right or evil, whether they are injurious or beneficial.

In Luke, chapter 13, however, Jesus described just the opposite effect. In a parable, he set the scene of another tree – a fig tree in a vineyard. The owner had been looking for fruit on that tree, but it hadn't produced. Not only was it not bearing fruit, but it was also just taking up good ground that might be otherwise used more productively. So the owner ordered the tree cut down.

The vinedresser urged the owner to show patience. He wanted to dig around the tree to treat its soil, water it, fertilize it, giving the tree every chance to produce. Then if it still didn't bear fruit, the vinedresser said it should be hewn down.

Truly barren is the soul cut-off from God, suffering from no personal relationship with him. Though the Master values that soul and Providence may give to it every possible chance, Jesus says that it will still be removed and cast away forever unless it comes to know God and serves his eternal purposes.

The sound of Jesus' warning is an ominous one.

In a similar way, what is true for the individual is also true for nations. To use something the former chancellor of Moody Bible Institute, George Sweeting, once said, "What is a dying nation, but dying individuals?" One might also add, "What is a thriving nation, but a nation where the Gospel thrives among the people?"

James Russel Lowell, the American poet and abolitionist, once challenged a group of skeptics to find "a place on this planet ten miles square where a man can live in comfort, and security, supporting and educating his children unspoiled and unpolluted, a place where age is revered, infancy respected, womanhood honored, and human life held in due regard;...where the Gospel of Christ has not gone and cleared the way and laid the foundations and made decency and security possible."

Isabella Bishop, a 19th-century English explorer, echoed Lowell's sentiments, claiming, "There is scarcely a single thing that makes for righteousness in the life of the non-Christianized nations. Everywhere perversion of justice, oppression of the weak, degradation prevail. Self-love is the sole law of morality, and self-interest the chief motive..."

These things remain constant even to the present day. The late Dr. D. James Kennedy and Jerry Newcomb in their 1994 book, What if Jesus Had Never Been Born, write:

"Civil liberties are a gift of Christianity to the world, and even at this time...those countries that enjoy the most civil liberty are generally those lands where the Gospel has penetrated the most. After a Christian foundation was laid for this nation, people of all faiths were welcome and given freedom of conscience as they could find in no other place on earth. America became a refuge for the persecuted, the downtrodden, the poor. 'In the process of time thousands have come among us,' said the great Charles Hodge of Princeton. He continued:


"'All are welcomed; all are admitted to equal rights and privileges. All our allowed to acquire property, and to vote in every election, made eligible to all offices, and invested with equal influence in all public affairs. All are allowed to worship as they please, or not to worship at all, if they see fit. No man is molested for his religion or for his want of religion. No man is required to profess any form of faith, or to join any religious association. More than this cannot be reasonably demanded.'" 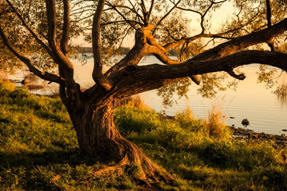 The point here is that even the atheists, the secularists, and the humanists, the primary culprits of the present hour that would separate our great nation from the rich nutrients of the Gospel waters its roots have deeply drawn – are immense beneficiaries of the very rights Christianity has afforded them.

Moreover, if America is ultimately removed from its moral and religious bearings – Christianity – every one of its political, social, economic and humanitarian institutions will suffer an irreparable blow by the ax of Destiny. The tree will be cut down, and liberty will have fallen.

Today many vinedressers plead with the owner of the vineyard to be patient. They dig around the roots of that tree; they fertilize it with truth, they seek by prayer, by proclamation, and often at great personal expense, to channel the waters back again.

Because everything lives where the river flows – progress – justice – freedom – individualism – true equality and tolerance – philanthropy – democratic principles – and the hope of a better tomorrow.