February 2, 2017
For more than 100 years, it's been the Boy Scouts. Its purpose was to grow and develop young boys into good men who become great citizens. Churches by the thousands have sponsored the Boy Scouts program because of its emphasis on being "morally straight." 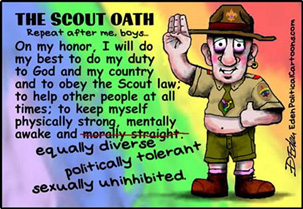 "On my honor, I will do my best to do my duty to God and my country and to obey the Scout Law: to help other people at all times; to keep myself physically strong, mentally awake, and morally straight," says the Scout's Oath.

But Monday, the BSA announced that they would be making a major policy change. Membership would no longer be based on what's recorded on an individual's birth certificate, but according to the gender a youngster identifies. In other words, girls who believe they are boys can join.

For a number of years, the Scouts' organization fought back the tide of political correctness, more specifically, the infiltration of homosexual ideology. They even won a Supreme Court case, Boy Scouts of America v. Dale, clarifying that they had a constitutional right to set membership standards.

In 2004, the Scouts sought to strengthen their policies by prohibiting leadership positions to "open and avowed homosexuals."

Despite these advances, however, the BSA started to lose its way. In 2013, the boys club lifted its ban on openly gay youth. Two years later, they lifted their prohibition on openly gay adult leaders. Now the organization has abandoned all common sense by allowing membership on the basis of "gender identity."

This means that girls will sleep with boys, shower with boys, urinate and defecate with them on the trail. Does that rattle my sensibilities? You better believe it does! In fact, the whole idea of it angers me.

Gay activist groups have ruined what was a great organization, not to mention the dozens of other dangerous ways they are chipping away at human fundamentals.

In just a few days, my son and his wife, God willing, will have their fourth child. It will be Kim's and my ninth grandchild. But if gender is simply a state of mind as LGBTQ voices and their cohorts insist, when the child is born, what's the use of us rejoicing with friends and family, declaring, "Hey everybody! It's a boy!" or, "We gotta precious little girl!"

If we are to believe these new assertions about gender, parents shouldn't get too happy about the sex of their newborn. As the child's personal understanding of self develops, their gender is subject to change, regardless of anatomy, they say.

"Gender reveal parties" with cute ways of sharing the child is a boy or girl are essentially meaningless. Why decorate your baby bump, have balloon launches, or pin the bow or tie on the ultrasound anymore?

Nowadays the poor stork doesn't know whether to deliver in pink, blue, or perhaps some alternative color of the 51 options for describing gender on Facebook.

What is more, today's Girl Scout could become today's Boy Scout! In fact, a girl who wants to be a Boy Scout might identify as a boy but still want to dress as a girl. Huh????

You'll have to forgive my sarcasm, but the point is a legitimate one. The concept of "gender identity" is the height of absurdity! It's the unfortunate consequence of a society that has for quite some time claimed truth is not absolute, but relative. "Your truth is not necessarily my truth or vice-versa," is often the claim. The belief is that no absolutes exist. Life is too complicated.

Such a view, I suggest, is several votes shy of a quorum. Those who tout this nonsense are described in Romans 1 as "futile in their thinking and darkened in their foolish hearts." Although they claim to be wise, they have become fools (Romans 1:21-22).

Gender is not like a suit of clothes that can be put on and then taken off. It's what we are, to the core of our being. It's the way God made us. We are either male or female in every chromosome of our bodies. No claim to be something other than one's biology, no surgery, nor the way one may dress can change this.

Transgender persons are emotionally confused and need help. We do them a terrible disservice by acquiescing to their claims or demands. When we do, we're not really showing love or compassion. We're actually harming them.

Certainly, love should be unconditional. However, love in action means showing patience and embracing the sometimes very painful role of pointing the misguided in the right direction. That's the way Jesus loved.

Moreover, we owe it to others, as much as within reason, not to allow such confusion to spread.

This is why the Boy Scouts should have said "no" to this new policy change. Now they can no longer legitimately be considered – the "Boy Scouts." Neither can we consider the organization "morally straight." It's time churches drop their sponsorships completely and invest in newly formed organizations like "Trail Life."