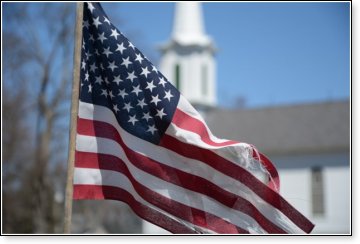 Summer months for the Christian Action League of North Carolina can be fiscally challenging. It's the period when contributions are the lowest.

As the League's executive director, it's my responsibility to find the needed funds, which precipitates making some phone calls to individuals and churches for help.

Recently, I contacted a church that had once supported the Christian Action League, but had reassessed their missions giving and stopped. They were under new leadership now, and their missions' director said the League "doesn't fit their vision."

I knew what that expression meant. "Doesn't fit their vision," was just a nice way of saying, "As a church, we intend to stay away from politics. We don't share your conviction that we should engage every aspect of the culture and shape it for righteousness sake." As I see it, this is a sad response, because churches unwilling to bring the terms of God's Word to bear on the great issues of our time are actually being quite short-sighted in their vision.

The gospel and Christian discipleship are much wider in scope than trying to get people into heaven and filling church pews. The gospel is about redemption for the whole man, and it stretches into every realm of life in which humanity operates.

In earlier generations, Christians in America understood this. Allow me to share a lengthy excerpt from what is now a book long out of print, The Gospel and the American Dream, written by Bruce L. Shelley. Shelley writes:

"In 1835, a generation before the Civil War, the well-known New England minister, Lyman Beecher preached one of his more popular sermons. He called it 'A Plea for the West.' The oration reveals Beecher's deep-seated belief that a vast new empire was opening in the American wilderness. Nothing less than a whole culture was at stake. Christians should seize the opportunity, he said, and shape 'the religious and political destiny of the nation.'

"And how did Beecher propose to do all that? He called for the preaching of the gospel, distribution of Bibles, the planting of churches, the establishing of schools, and the reform of American morals.

"This vision of a Christian America dominated evangelical thinking and generated what historians have called the 'Righteous Empire'.... As evangelicals faced the challenge of winning a nation to Christian obedience, two instruments were available to them: revivals and voluntary societies.

"America's first Great Awakening created an evangelical fixation upon revivals as God's special instrument for reforming the American people. As the nation spread westward, spiritual awakenings occurred in the newly settled regions between the Alleghenies and the Mississippi and proved to be a primary channel for the spread of Christianity and the civilizing of the wilderness.

"Since the then-recently adopted American Constitution and Bill of Rights rejected any thoughts of a 'holy commonwealth' by ruling out any direct influence of the churches upon the government, how were these growing numbers of Christians to fulfill their responsibilities for public life and morals? That is where the voluntary societies came in. William Carey and other English evangelicals had designed the voluntary society to carry the gospel to India and to fight the slave trade in the West Indies. The societies allowed individual Christians, without regard to denominational identities, to mobilize their efforts for moral and religious causes. They simply contributed their money, and in some cases, their lives, to advance their cause at home or overseas...

"American evangelicals seized the idea for their own purposes. It seemed the perfect instrument for America's free society. Thus early in the nineteenth-century scores of societies sprang up to shape some aspect of American life: Bible Societies, Sabbath Societies, Mission Societies, Temperance Societies. 'One thing is becoming daily more evident,' said Beecher in 1830, 'the grand influence' of the church and the triumphs of the last forty years are the result of the 'voluntary association of Christians.'

"That grand influence of the churches included the shaping of American morality and many commonly shared religious beliefs...

"When [Alexis] de-Tocqueville visited the country in the 1830s, he expressed his admiration for the democratic process at work in the numerous small communities throughout the nation.

"He held that American democracy was always in danger of disintegrating into a selfish pack of mutually antagonistic individuals. But he found a bulwark against such a mass society in America's small towns, where most people were self-employed, civic-minded, and influenced, directly or indirectly, by the Christian faith.

"This vision of a democratic America, linking Christian values and republican principles, was probably the prevailing vision throughout the nineteenth century. Few dared to stand and challenge President Woodrow Wilson when he said, 'America was born a Christian nation for the purpose of exemplifying to the nations of the world the principles of righteousness found in the Word of God.'"

May I suggest that because this vision no longer fits much of the church today, America is on the brink of complete disaster, and Christians are starting to feel like aliens in their own country!

For a church to say that addressing what's happening in politics "doesn't fit their vision" is also a way of admitting to selective blindness.