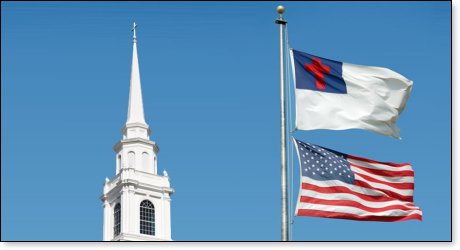 West Asheville Baptist Church in Asheville, North Carolina, prominently flies the Christian flag above the American flag. When asked about it, Stan Welch, the church's pastor, tells people that he knows it's not proper flag etiquette, but it's not a mistake by the church. They're doing it purposely to make a point. They started flying the Christian flag that way back in 2015 because they believed the nation had entered a time when there ought to be an emphasis on God being first, and then country.

"It's not a protest; it's simply who we are," says Welch. "It's going along with our National Motto, 'In God We Trust.' That's our ultimate trust. When we get to heaven one day and stand before the Judgment, we're going to be asked, 'How good a patriot were you?' It's then we're going to be judged on our Christian faith."

Welch says flying the Christian flag above the U.S. flag brings heat in a progressive city like Asheville – a city where the political philosophy of many sees government as the giver of rights rather than God. In fact, this week, the Asheville Citizen-Times highlighted West Asheville's flag flying in the segment: "The Answer Man" by John Boyle. It's the second time Boyle has covered the subject in the last five years since people are still inquiring whether it's legal and why the church is doing it.

West Asheville is not the only church flying the Christian flag above the American flag. Rit Varriale, the pastor of Elizabeth Baptist Church in Shelby, North Carolina, says one would be surprised to see how many churches and residences are flying the two flags in that manner throughout Cleveland County.

Varriale could rightly be given credit for the concept. He says that back in 2015, he was already planning to launch a new website, God Before Government, when one day, he noticed that Focus Missionary Baptist Church in Shelby was flying the Christian flag at their church above the American flag. Varriale then sought out the pastor, which led to the discovery that the two preachers shared concerns that America had seemingly forgotten that portion of the pledge to the U.S. flag, which says, "one nation under God."

Focus Missionary Pastor Walter Wilson, who had been flying the Christian flag above the American flag for several weeks, said that one day while he was hoisting the flags, God's Spirit spoke to him and said that God should always be first. "Everything we do, we're supposed to acknowledge Him first," Wilson told the Gaston Gazette. "He told me to put the flag above the American flag."

Wilson's obedience to God inspired Varriale not only to do the same, but to use the switching of the two flags as a means of sending a critical message – the message that God comes before government.

Varriale said that he was never really trying to start a movement. He just wanted to make a stand. But as people caught wind of it, it became much more than he anticipated.

"When we looked at the analytics of our God Before Government website and Facebook page, it created a tremendous amount of conversation. We even trended number one for topics on Facebook," he said. "We were number one for over 24 hours, which is almost unheard of. We had contacts from across the country, who were telling us that they were doing it, but we never kept a tally."

However, Varriale said that there was one disappointment: "I will say though, at the same time that it generated a lot of discussions, it was disappointing to see the number of key leaders that could have jumped on board with this, but decided that they wanted to sit it out because they thought it was too controversial."

Varriale said that there seems to be a pervasive feeling in evangelicalism today that first we have to get people to like us, and then hopefully if they like us, they will like the message of Jesus.

"Certainly we don't want to be cantankerous and mean-spirited when we're taking a stand, but sometimes you have to take a stand, and if people are offended at it, if people are upset by it, so be it!" he added.

Varriale also notes that in his dialogue with people who questioned the appropriateness of flying the Christian flag above the American flag, the one argument that caused people to pause more than anything else was his pointing out to them the inside front cover of the Roosevelt World War II Bible, particularly the Navy edition, which has a picture of the pennant of the church, the Christian flag, flying above the American flag. 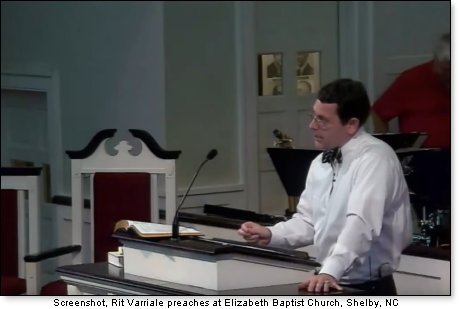 Varriale says, "Was Roosevelt aware of the fact that there were Muslims in America during the 1940s? Of course, Roosevelt was a smart man. He knew that there were atheists. He knew that there were socialists, liberals, and others who completely objected to Christianity. And back in the 40s, they were laying the seeds of the extreme liberalism that we see today. But he, knowing that we were, by and large, a Christian nation, demonstrated that the church flag is the only flag ever to be flown over our nation's flag, and it's to be flown during divine services. So we're a church [Elizabeth Baptist Church], people are praying here and doing stuff of a divine nature all the time."

Still, some objected, more specifically Christians, who told Varriale that God would never honor what he was doing because "it was born of the spirit of rebellion" – because it was in the spirit of noncompliance – because it disregards flag etiquette and even though flag etiquette is not punishable by law, it is a law, and God never honors rebellion.

"But I'm thinking to myself Messianic rebellion is what sent our Lord to the Cross, the fact that he wouldn't toe the line of the authorities of his day. If Jesus had just stayed in Galilee and taught Bible studies and led great worship experiences, they wouldn't have killed him. They killed him because he challenged the authorities," said Varriale. "He basically said that honoring God is more important than honoring you. And of course, that's what caused the disciples to face the harsh treatment they went through in Acts chapters 3–5. They said we are going to obey God rather than men."

Varriale concludes that Christians aren't characteristically rebellious, they're just the opposite, but when we're being pushed by the government to live in ways contrary to God's law, that's when it's proper to peacefully rebel. 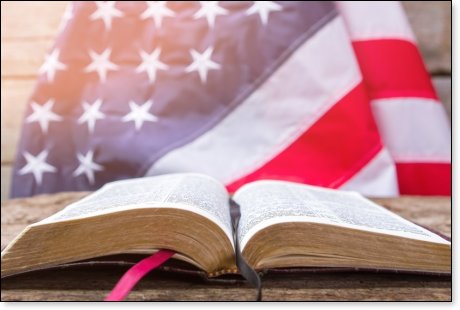 Just recently, I met with a group of about 25 key church leaders in Vance County, North Carolina. I told them that the Bible has historically provided the premise for law and liberty in Western Civilization, especially in America, and it is an indispensable source for governing in a manner that ensures domestic tranquility, prosperity, justice, and happiness for every nation around the world. Christians have always believed, and American citizens have generally agreed, the rule of law requires the state to act in accordance with the principles of a "higher law" – the revealed will of God as delineated in the Bible.

Although Varriale never set out to make flying the Christian flag above the American flag a movement, I believe in these times when religious liberty is under serious assault, socialism is on the rise, and Americans have seemingly forgotten that freedom can only be sustained by a right relationship with our Creator, it seems to me that it should be a movement.

On a personal note, I say, may God hasten the day when we would see Christian flags flying above the American flag in front of churches, residences, and other places everywhere. I'm for it! It's neither a protest or an unpatriotic act! Instead, it merely sends a desperately needed profound message: America's hope – the answer to its many seriously complicated problems – the best response to its greatest threats and the vast divide between the American people – is to put God first again.