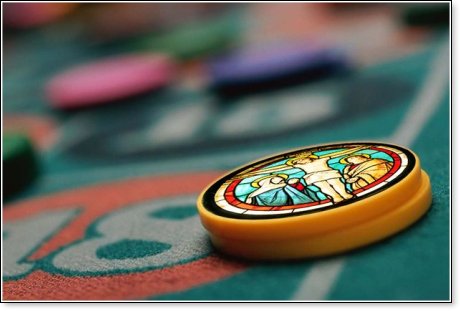 The Oxford Dictionary defines religion as "belief in and worship of a superhuman controlling power... a particular system of faith... a pursuit or interest to which someone ascribes supreme importance." Technically speaking, gambling is not a religion, but in principle it certainly apes one.

Lady Luck is its superstitious deity. It is not in God that the gambler trusts, but in money. Gambling is borne of covetousness, which the Bible says is idolatry. Gamblers love gaming and practice it with intense devotion.

"It's Sunday morning at 11:00 a.m. People by the thousands from all walks of life are worshipping at the First Church of Hucksterism. They're setting aside the problems of life, looking for hope and a sense of well-being. They gamble religiously. Money goes into slot machines rather than offering plates.

"The casino is more economically and racially diverse than the typical church. No one is turned away. Gender doesn't mean much at the roulette wheel. People 'pray' together in small groups around the blackjack or poker tables, or they express themselves singularly at the slots or sportsbook monitors. The 'communion wine' is free and flows freely.

"From Atlantic City to the Mississippi coast, from Midwestern riverboats to Las Vegas, Sunday morning at the casino is no different than any other daybreak."

Gambling also has its prophets. These prophets are lawmakers, directors of charities, business interests, and the media. They earnestly and boldly proclaim gambling's promises of salvation. With oratory as fabulous as any televangelist who preaches the Gospel, they proclaim:

Do you feel overburdened with taxation? Gambling is a practical political means for raising revenue without taxation. It will save us in our hour of need. Gambling is neutral and completely voluntary. It's a matter of free-will. The choice is up to you. But if Lady Luck smiles on you with fortune, a mansion and a paradise of treasures unknown can be yours. Legalized gambling advances the virtuous cause of charities. It assists the government with cutting back the costs of law enforcement and the courts by eliminating illegal forms of gaming driven by formidable sources of corruption. Legalized gambling is a great provider of jobs. It can inspire a depressed and broken economy. O the blessed wonders and unsearchable riches of gambling.


Somebody say Hallelujah! Not!

The conversion rate to gambling has been astounding. It's difficult for younger generations to comprehend that less than 50 years ago, the public generally rejected it.

Rogers notes the way things were.

"You had one of three choices: Either you got involved in some kind of illegal gambling, you traveled to Las Vegas or scattered racetracks, or you participated in some social or friendly gambling in a variety of competitive games. Today that's not the case," says Rogers. "Beginning with lotteries in the sixties and followed by casinos in the nineties. Americans have plunged headlong into legalized gambling in virtually every form. Gambling that was once a social taboo, or at least limited to certain leisure expressions in restricted areas, is now an accepted part of everyday life. It's as easy as buying milk. Just pick up a lottery ticket at the convenience store."

And there was no lack of attendance or participation. Dave Mason, the brand manager for BetOnline.ag told the N&O, "Our casino and poker [internet] room numbers are through the roof. They are breaking records."

There is no insistence by government officials on separation of church and state when it comes to the religion of gambling. There is no hostility or tension between the two. Forty-five states, plus the District of Columbia, Puerto Rico and the Virgin Islands have state-sanctioned lotteries. The government welcomes, loves, and partners with gambling.

Would that America experienced a great spiritual awakening as pervasive over the culture as wagering has become – a movement of God so powerful that government embraced Christianity like it has gambling – as a trusted friend and not an enemy – a movement so profound that our houses of worship were overflowing with congregants who took their faith as seriously as the compulsive gambler does his next bet.

Gambling is a false religion. Its prophets tout a message of false profits. Its social costs are always higher than its tax revenues. Gambling is not merely a voluntary matter, for its success in billions of dollars is dependent upon enslaving millions, robbing them of their psychological and financial freedom. It draws money away from businesses which provide a better return for the economy than what they take out of it. Legalized gambling doesn't reduce corruption but supplies it with respectability, and thereby enables it, increasing law enforcement and welfare costs. And while it may provide jobs, it also works as a disincentive to industry, a strong work ethic, and personal savings. Worse still, whether one is a winner or a loser, gambling dissuades one from a life of faith in God.

What kind of religion takes more from its adherents than it gives? – a counterfeit religion – a devilish one – a misguided faith.

Don't be deceived. Gambling serves as an evil substitute for true religion.