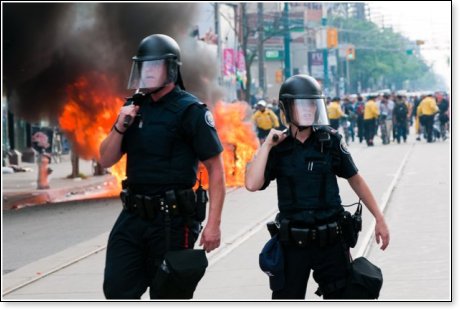 The Facebook posts that ran across my thread said, “Anyone feeling like we’re back in the 60s again?” I was just a boy during the sixties, but I remember those days quite well.

One night, my parents had sent me to bed early. My bedroom door was still open, and so I could hear what was on the television in the den. The evening news was about the race riots in the streets, buildings burning, people screaming at one another in anger, gunshots, and death. I remember feeling such a heavy spirit of grief coming over me that I started crying. My mother heard me weeping and went to check on me. When she came into the room and asked what was wrong, I remember saying, “Mama, there are so many bad things happening. People being so mean to each other. Why don’t they love God? It makes me sad that they don’t love him.”

I think that was my first experience with God’s Spirit working in my heart. The Scriptures teach that love for God is always translated into a love for one’s fellowman. The apostle John wrote: “If anyone says, ‘I love God,’ and hates his brother, he is a liar; for he who does not love his brother whom he has seen cannot love God whom he has not seen” (I Jn. 4:20).

Recently thumbing through the late Dr. Billy Graham’s book World Aflame, which was published in 1965, I couldn’t help but marvel at how much of what Dr. Graham wrote then was pertinent to today.

Here are some quotes from that book:

Flames out of control

“Our world is on fire, and man without God will never be able to control the flames. The demons of hell have been let loose. The fires of passion, greed, hate, and lust are sweeping the world. We seem to be plunging madly toward Armageddon.”

The flame of lawlessness

“Rebellion and lawlessness are already present on a scale such as the world has ever known…There is an organized attempt to downgrade the policeman, to make fun of him and despise him. All this is part of a general disrespect for law and order… We have taught during the past few decades that morals are relative, and now we are reaping the harvest. The tendency of the educational system, the courts, and the mass communications media is often to ignore the victim of a crime and to coddle the criminal. In some cases, we even make the criminal a hero.”

“Being born black in some parts of the world – or Jewish in other parts – or Oriental in others – or white in some places – imposes intolerable burdens, while those who are accidentally born to the ruling majority enjoy advantages they have not always earned and of which they seem to have little appreciation. To hate, to discriminate against…. is a consistent and universal trait of human nature extending beyond national barriers. Racial prejudice is not limited to the Southern part of the United States…. Wherever two races live side by side, there exists prejudice.


“There is so much hypocrisy on the subject of racial prejudice that it is difficult to know where to start. Christ has taught the dignity of man and the possibility of the brotherhood of man in himself. Wherever there is discrimination, Christ is at work with his sword cutting out hatred and intolerance. The Bible says plainly that God is no respecter of persons. This cuts across the theory of racial supremacy and makes all men equal in the sight of God. The biblical position tends to create dissatisfaction among those who feel they are discriminated against. It also creates a guilt complex among those who do the discriminating.”

The rise of Socialism in America is one of its most stunning developments in recent years. Socialists and Communists themselves acknowledge that Socialism is really not separate from Communism. The statistics show that the support for Socialism among America’s younger generations is alarming. Who would have ever dreamed a few years ago that an avowed Socialist would be a major contender for the U.S. Presidency? Moreover, Communist China seems to be flexing its political muscle against the United States, as well as other nations.

During the sixties, Americans were deeply concerned about the spread of Communism around the world and its infiltration of the West. At that time, Graham also wrote insightfully about this in World Aflame.

Communism can never succeed unless Christianity fails. Lenin once said: "Religion is a kind of spiritual gin in which slaves of capital drown their human shape and their claims to any decent life." The mistake that Lenin made was to ignore history and to remain ignorant of the teaching of the Bible. The Russian church under the Czars had given Lenin and his followers only a caricature of true Christianity. Thus what he said was in part right when viewed in the context of the place and times in which he lived.

How many professing Christians in America and Europe consider Christ and the church, not as a central loyalty, but as a shot in the arm, administered in a brief visit to the church on Sunday morning? It becomes a duty, and often a painful one, like going to the dentist, and the patient heaves a sigh of relief when the pastor says "Amen" and the weekly treatment is over. Though Lenin by no means presented the whole picture, he was right when he said that for many people, religion is a spiritual cocktail that helps to dull the pain of living. Unless we can prove Lenin wrong by an awakened sense of consecration that can equal or excel the dedication of the Communists, we are fighting a losing game.

While the Communist peril is real, the Christian prospect is also real. Communism does not have the ultimate answer or the final hope. With whatever vigor and effort Communism may attack the problems of the world’s disinherited masses, it has no answer for man’s real problem – the problem of the human spirit in search of God. This is one of the reasons why Communism will ultimately fail.

The flame of uncontrolled science

Graham went on to describe how we have made an idol of science. He said that although science was dedicated to solving our problems, it had also been misused to create more significant problems than the ones it sought to fix.

For instance, who today isn’t profoundly thankful for the advances in medical science? But with the coronavirus, there have also come grave concerns about the development of various pathogenic bioweapons.

“Not until man’s moral progress catches up with his intellectual progress can we hope to solve the problems posed by science,” said Graham.

The flame of political dilemma

Like a prophet of old, in World Aflame, Graham addressed the political dilemmas of the United States:

Will Durant said: "No great nation has ever been overcome until it has destroyed itself."… In America, we are now on the verge of seeing a democracy gone wild. Freedom has become license. Moral law is in danger of being abandoned even by the courts. To what degree can we expect immunity from the inevitable law of regress that sets in when nations defy the laws of God?

What is the answer to our problems? Without God, man is worse off than a flower severed from its stem. We forget that we are finite. We have paraded our arrogance to the very precipice of a tragic end.

“In this is love, not that we loved God, but that He loved us and sent His Son to be the propitiation for our sins. Beloved, if God so loved us, we also ought to love one another” (I John 4:10-11).