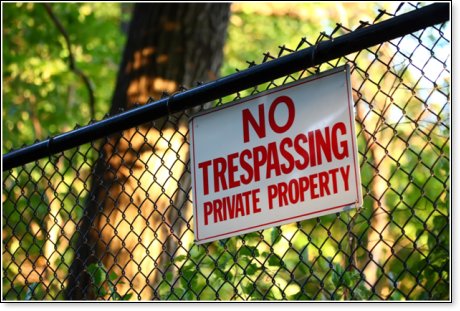 I once read a story about a father who was walking down the road with his son when the boy asked, "Dad, do you suppose anywhere in the world there is a sign that says 'trespassing'?" The father then asked his son what he meant, and the boy replied, "Well, see that sign over there that says 'no trespassing'? Do you suppose there's a sign somewhere that just says 'trespassing'?" The father then laughed, and the two of them started imagining what it would be like to secretly change No signs to Yes signs, from "no trespassing" to "trespassing," "private keep out" to "public come in," "Stop" signs to "Go" signs, "no parking" to "parking," "danger" to "safety," etc. It's an amusing thought.

Has it ever occurred to you that over most of the world, God placed a Yes sign? We are free – free to create – free to enjoy – free to dream – free to choose.

There are, however, a few "no trespassing" signs from God. We read a broad overview of them in the Ten Commandments: "No worshiping other gods," "no graven images," "no taking the Lord's name in vain," "no neglecting of the Lord's Day," "no disrespecting parents," "no murder," "no adultery," "no stealing," "no lying," and "no coveting." But even so, contrary to common thought, God didn't give these commandments to make life miserable. He gave them to make life full, meaningful, and abundant. God's "Thou shalt not's" are actually positive in nature and meant to keep us safe – to keep us free.

Because our lives are interconnected with God and each other, there are always choices to make. We have the liberty to make these choices – even bad ones should we desire. The renowned Methodist minister, the late J. Wallace Hamilton explained it this way:

"He [God] chose to make a person, to set man down in this rough and risky world with the awful power to choose his way, to make or mar his destiny, to climb the heights or sink in the depths. It is an exceedingly dangerous endowment, this freedom. But without it, what is man?"

In other words, this freedom to choose which God gives is at the essence of our humanity. Yet, it is an incredible responsibility and most consequential. We either govern ourselves properly, making the right choices, or we'll ultimately be governed by people or circumstances that take away our freedom.

When we think of government and its place in our lives, we typically think of its external role. We think of the direction, regulation, and restraint it provides. But government's external functions only work to our advantage when internal government is properly operative. As Mark Beliles and Stephen K. McDowell explain in Liberating the Nations:

"All government begins internally in the heart of man, with his ability to govern his conscience, will, character, thoughts, ideas, motives, conviction, attitudes, and desires. How a man governs himself internally affects his external actions, speech, conduct, use of property, etc. Each external sphere of government is a reflection of the internal sphere. [T]he internal is causative to the external. The type of government that exists in the homes, churches, schools, businesses, associations, or civil realms of a country is a reflection of the self-government within the citizens.

"Stated another way, you must rule yourself before you can rule others. The Bible teaches that rulers must be self-governed…. Effective government begins by an individual learning to govern himself. The more internal self-government a person possesses, the less external government he needs. Consequently, the more rules and laws required to keep people acting rightly is a revelation of a diminishing amount of self-government….

"The fourth President of the United States and chief architect of the U.S. Constitution, said:

Beliles and McDowell go on to argue that when people in a nation become less self-governed, they give up their power, and government grows exponentially, usually well beyond its realms of jurisdiction. There is the making of more and more laws, leading to greater centralized external government which precedes the loss of individual liberty.

Isn't this precisely what we're seeing in America today? For more than two and half centuries, we've seen God's Yes signs everywhere. Now the Yes signs are rapidly becoming No signs because we've mistaken liberty for a license to ignore God's gracious and benevolent instructions for choosing wisely.

To the foolish, it sounds overly simplistic, but to the prudent it’s the only way. We must return to self-government – obedience to our Creator and his guidelines as found in the Bible. It cannot be said enough or too often.