Rev. Mark H. Creech
A sign from heaven pointing to the Bible? 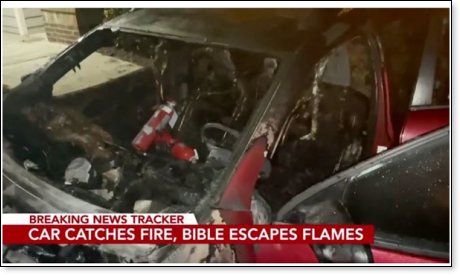 According to WRAL News, officials responded to a car fire at an apartment complex in Raleigh, North Carolina, around 1:00 a.m. on Tuesday (April 20). A Jeep was in flames.

Police said the fire was the result of a mechanical issue. The driver was able to get safely out, but the vehicle was reduced to ashes.

Still, there was something unexplainable that happened. Even though everything in the car was completely burned, a Bible remained on the dashboard. The Holy Book was burned around the edges of its cover and pages, but the content was wholly intact and readable.

Was it a miracle? It certainly seems like one. At the least, I think it’s a providential sign reminding us of God’s enduring word. Though the flames of persecution or criticism rage against it, the teachings of Scripture are eternal and indestructible.

The prophet Isaiah said, “The grass withereth, the flower fadeth: but the word of our God shall stand forever” (Isa. 40:8). The apostle Peter enlarged on this same text, saying, “Being born again, not of corruptible seed, but of incorruptible, by the word of God, which liveth and abideth forever. For all flesh is as grass and all the glory of man as the flower of grass. The grass withereth, and the flower thereof falleth away: But the word of the Lord endureth forever. And this is the word which by the gospel is preached unto you” (I Pet. 1:23-35.)

In other words, God’s word, unlike the natural order, which ends in death, converts the soul and results in eternal life. All of the best that humanity can do, all of the glories of civilization, are subject to wilt, wane, and fade away; only the content of the Bible is incorruptible and abides forever.

In his book, Our God-Breathed Book – The Bible, the late John R. Rice quotes Dr. A.Z. Conrad, once the pastor of the Park Street Church in Boston. The quote is most eloquent in explaining the wonder of the preservation of Scripture:

“It would be a strange contradiction of evidence to ignore or deny the fact that the hand of God has been definitely engaged in protecting and preserving his word. Charles T. Bateman, in his interesting volume, ‘The Romance of the Bible,” follows with great care the history of the writing and preservation of the word. Its existence seemed again and again imperiled by neglect, by apostasy, by violent and determined efforts to annihilate it. In the ten great Roman persecutions, the Book of the Christians, the Bible, was the special object of attack; in each of the persecutions, the effort at its annihilation was coextensive with the imperial power of the day. Nero, Domitian, Trajan, Hadrian, Septimus Severus, Marcus Aurelius, Valerian, and Diocletian undertook the obliteration of the Bible from civilization. Each effort proved not only abortive, but finally resulted in the multiplication of the copies of the Word of Life.

“Not only has the Bible proved its indestructibility at the hands of its enemies, but it has withstood even the greater danger, that of overthrow and defeat at the hands of its supposed friends. There are few chapters in human history more weighted with significance than those which related to the attitude of the Catholic Church toward the Bible at the time of Henry IV. The dungeon, the rack, and the flame were all employed to prevent the common people from having the benefit of a free reading of the Bible. The fires of Smithfield were, again and again, proving the tremendous hold of the Bible upon the martyr spirits that suffered death because of their loyalty to the ever-living word. The years following 1533 repeatedly witnessed the most agonizing martyrdom in the interests of an open Bible. Fryth, Anne Askew, Alexander Campbell were the first of many to lay down their lives for the Book of books.”

Such evidence doesn’t necessarily prove the Bible is the Word of God. That’s another discussion for another editorial. Nevertheless, I believe the preponderance of voluminous other pieces of evidence demonstrates that the Bible is divine and without error. What the evidence presented here shows, however, is one aspect of the Bible’s superiority and uniqueness to any other writing in history. 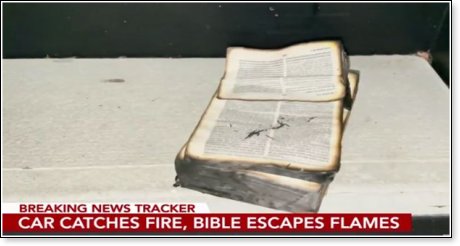 Christian apologist Josh McDowell has written that a professor once told him, “If you are an intelligent person, you will read the one book that has drawn more attention than any other, if you are searching for the truth.”

McDowell added, “The Bible certainly qualifies as this one book.”

Perhaps a Bible that wondrously escaped the flames of a burning automobile when everything else around it was utterly destroyed is a small omen to our state and nation. This omen says to anyone who will listen, look to the Bible. Its message is everlasting, imperishable, and just as it has been saved through the centuries to the present, it can save you. It can save us.

I believe it. Will you?

Pictures are screenshots from WRAL News.