Cindy Simpson
The Obama doctrine: freedom for whom?

September 30, 2014
As our nation considers what President Obama now admits as "the real and growing threat" of terrorism, the question must be asked: What is the "Obama Doctrine?"

If we discover that the answer, rather than a description of a "half-hearted war on terror," is a similar but refocused version of the Bush Doctrine, we will find ourselves "stumbling" more than Sarah Palin to explain it to the likes of Charlie Gibson.

For, a close examination of the thinking behind the Obama Doctrine reveals that we are engaged in a very real and dangerous version of the conflict waged inside the minds of those who insist that Islam is compatible with freedom. This doctrine dictates a war that is not only conceptually lost at the outset, but one that will produce actual loss, threatening lives even within our nation's borders.

Back in 2008, Palin supposedly "stumbled" when Gibson asked whether she agreed with the "Bush Doctrine." Gibson, with the sigh of an "impatient schoolteacher," informed her that the doctrine was one of "anticipatory self-defense." Charles Krauthammer, however, patiently corrected Gibson in his column explaining that the Bush Doctrine had in fact evolved into a "freedom agenda," articulated by Bush in his second inaugural address:


The survival of liberty in our land increasingly depends on the success of liberty in other lands. The best hope for peace in our world is the expansion of freedom in all the world.


Such an agenda sounded well and good, but as we have learned years later, the problem with such a doctrine is that it hinges on a universal meaning of the word "freedom." For if the definition includes the freedom to practice fundamental Islam, then the survival of what the rest of us consider to be "liberty" and "peace" – anywhere – is hopeless.

G.K. Chesterton, known as "the master of paradox," once wrote: "[T]he whole difficulty in our public problems is that some men are aiming at cures which other men would regard as worse maladies; [others] are offering ultimate conditions as states of health which others would uncompromisingly call states of disease."

Jonah Goldberg, in his book The Tyranny of Clichés, similarly took apart a related cliché, "One man's terrorist is another man's freedom fighter." He wrote: "What freedom is an al Qaeda fighter for exactly? Hamas? The freedom to lock women away in burlap sacks, crush homosexuals, and throw acid in the faces of children?"

It is evident that the expansion of Islam – aided by liberal immigration policies, multiculturalism, and political correctness – has not ushered in progress, freedom, peace, or liberty (as we would define the terms), nor has the increased application of sharia (Islamic) law complied with the UN list of "universal human rights." Rather, Islam's expansion has yielded a vast amount of destruction and terror. While pundits, politicians, and some authorities seem to wish the phenomenon away – by the timely addition of the word "extremist" before Islamic, removing references to Islam from military training manuals, or ignoring Islamic terrorists in reports on domestic threats – tallies and photographs of those murdered, mutilated, tortured, and in desperate flight reveal a different reality.

The "myth" – that Islam "extremism" represents only a "tiny minority" – was soundly refuted by Breitbart's Ben Shapiro. He listed several recent polls that show that millions of Muslims generally support ISIS goals – goals which do not represent "a rootless philosophy unconnected to Islam entirely" – "even if they don't support the group itself." Another recent Saudi opinion poll noted by Diana West "claimed that 92 percent of respondents agree that ISIS 'conforms to the values of Islam and Islamic law.'"

The obvious fact – that sharia is utterly incompatible with our ideas of freedom of liberty – was not addressed by the Bush Doctrine as it sought to "win hearts and minds." Obama, by also insisting that Islam is peaceful (and as he often reminds us, he of all people should know), must then ascribe to a version of the Bush Doctrine, one that we can extrapolate from his words and actions.

Last summer, former Vice President Dick Cheney declared the following "hallmarks" of the "Obama Doctrine": "empty threats, meaningless red lines, leading from behind, appeasing our enemies, abandoning our allies, [and] apologizing for our great nation" – none of which would secure "American freedom."

Such descriptions essentially argue that there is really no coherent Obama Doctrine at all. But we could also argue that Obama has hinted, if not at a specific doctrine, at least at a consistent ideology that shapes it.

Jeffrey Lord was one of the first to notice its structure in his commentary on the Benghazi attack, when he frighteningly concluded that the Obama administration "is in some fashion simpatico" with the "totalitarian ideology" of sharia.

A Center for Security Policy panel convening around the same time reached a similar consensus – that the Middle East is rapidly unifying and heading toward a strict application of sharia; that sharia is a totalitarian form of government incompatible with American ideas of freedom and liberty; and that Obama's policies are "making the world safe for sharia," as opposed to keeping the world, and specifically America, safe.

Obama, in his speech to the UN following the Benghazi incident, assured members (after mentioning the infamous "anti-Muslim" video that supposedly ignited the attack) with a statement that was largely censored from the mainstream media: "The future must not belong to those who slander the prophet of Islam."

(As a side note, Diana West described the "peculiar definition of 'slander' under Islamic law. According to such authoritative sources as 'Reliance of the Traveller'... 'slander' in Islam includes anything Muslims perceive to reflect badly on Islam and its prophet, including the truth. In other words, any negative fact about Islam and Muhammad is, under Islamic law, deemed 'slander.'")

Also, three years earlier in his Cairo speech, Obama said that it was his "responsibility as President of the United States to fight against negative stereotypes of Islam wherever they appear."

Keeping those past statements in mind, we now hear both Obama and Secretary of State Kerry assuring us that Islam is religion of peace, that ISIS speaks for no religion, and that ISIS follows a "perversion" and "gross distortion" of Islam.

Under Obama's thinking, then, ISIS actions would be seen as "slandering" the prophet and creating a "negative stereotype" of otherwise peace-loving Muslims.

How then should America view Islamic governments that carry out, on a regular basis, other human rights atrocities under their duly enacted laws?

Andrew McCarthy reminds us that our supposed "moderate" partner of Saudi Arabia is governed by Islamic law, and so it routinely beheads, stones, flogs, and amputates. "Such cruel – but not at all unusual – punishments are designed to enforce a societal system that...degrades and dehumanizes women, while subjecting apostates and homosexuals to death and non-Muslims to systematic discrimination." 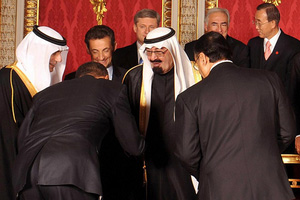 These are examples of actions carried out not by "extremists" who we are told do not speak for Islam, but as a matter of law by the rulers of Islamic nations. (One of which is a King that Obama once bowed before.)

Are not these Islamic nations creating, as does ISIS, "negative stereotypes" of Muslims? Are they also "slandering" the prophet of Islam?

The clash of such notions inside Secretary Kerry's mind may have been the reason for his "struggle" to find the words to assure us that this "war" we are in ("if you care about what you call it") is against "an enemy of Islam."

Since a "war" signifies a conflict with opposing sides, depending on the viewpoint, one side is the enemy and the other the victim to be defended. Based on Kerry's statement, we could conclude that any other group that slanders Mohammed or produces negative stereotypes of Muslims is also the enemy we are supposed to be fighting against.

Since much of the slandering and stereotyping is represented in terrorist actions that involve lots of killing and maiming, some may find themselves nodding in agreement, especially if they believe that Islam is truly a religion of peace. But if it is not, as polled and evidenced and manifested time and again over the centuries  the most troubling aspect of the Obama Doctrine is its subtle identification of the victim we are defending: Islam.

Just think of the gravity of that concept:

The Obama Doctrine centers on defending Islam against its enemies  a religious system that at its fundamental core is itself the enemy of what we consider to be freedom, liberty, and peace.

This is the doctrine that sets the rules of engagement in a war that pits reality against political correctness. A war no longer fought only in the foggy trenches of the progressive-multiculturalist-relativist mind, but one that may soon spread across our unsecured borders and onto real battlefields on American soil.

And should Americans dare to truthfully describe or criticize Islam or sharia law and speak out against this war to defend it – they could also be considered, in the addled minds of such progressive thinkers, as the enemies of Islam.

In essence, then, under the Obama Doctrine, we are at war for "freedom" – but not of the sort that Americans have fought and died for. Instead, this doctrine protects Muslims in their conquest to freely govern by Islamic law. If the Bush Doctrine sought to secure "the survival of liberty," the Obama Doctrine all but assures its destruction.