TALK ABOUT LESS-THAN-"20/20" HINDSIGHT, our lefty "journalists" never learn. Castro promised to eliminate poverty 50 years before that, but the actual results escape media comprehension when they have cognitive dissonance (and no education whatsoever in economics).

The word-for-the-day, boys and girls: "cognitive dissonance" really means: internal contradiction, incongruity, or mental "disharmony" (as in an off-key note in music). The term was coined in a book by a psychologist (surprahse, surprahse) in 1962. Arrogant academics ever since have used the term, loosely speaking, to describe their ideological foes. There is no reason to answer questions or do any self-examination when you can [they think] simply label the other guy as "stupid."

Then just shut him up. Demonize and marginalize him. Take him off the air if you can.

In my very first column I listed 17 flagrant self-contradictions of the cultural/religious/political Left. www.renewamerica.com/columns/dahlgren/030909 The real "book burners" are now on the far-left, you know. See:

The co-winners of my "column-of-the-week award" though are Fred Hutchison and Ben Shapiro. In "Dreaming of a world without God," www.wnd.com Shapiro says:

"This, then, is the 'ethical life' proposed by the liberals who echo [Christopher] Hitchens: the unethical life of moral lassitude. It is a collective program of moral abdication on the international and domestic fronts. It is the substitution of libertinism for liberty, accompanied by the substitution of enforced fairness for individual freedom."

Hutchison, in "From the King James Bible to Samuel Johnson (1600-1750); a brief history of conservatism, part 3," scans much of that "great VOID" in public education in this era. He talks about that "first generation American" zeal of the Puritans, and how the Puritan leaders had to struggle with potential schisms (i.e., "We art Purer than thou art Pure") and how they had to exercise leadership in order to limit divisions. And how their view of morality affected Culture and America's strength.

I'm a third-generation American with an acute sense of the zeal of my parents and grand parents, even though I only knew one of the latter (that first generation of Americans didn't always die "old," but they died WISE). It's disappointing to see the "first-generation zeal" nearly dying out in myself sometimes, and in the fourth and fifth-generation Americans. We have a longer "life-expectancy," but I wonder how many of us will fail to reach that "expected" age — either due to personal follies or the follies of our nation's "Leaders."

"The fires of the Reformation opened the hearts and minds of millions of ordinary people who had not been participating in the high culture of the day. The Renaissance only reached a tiny elite segment of the population. The Reformation reached the butcher, the baker, and the candlestick maker. The butcher now could read, thanks to Protestant schools, and had a Bible tucked away in his back room.

"The effects of the Reformation lasted the longest in Anglo-Saxon lands because of recurring spiritual revivals. The Great Awakening (1730's and 40's) had its greatest impact in New England, but had widespread influence in other colonies and in many parts of Great Britain.

"Many who were awakened from their quotidian slumbers by the Reformation, and later revivals became interested in community and cultural affairs and in reading newspapers and arguing politics. Puritans and their Yankee descendants are famous for their debates in their town halls and their incessant agitation for public improvements."

"The Yankees replaced their Puritan forefathers' zeal for God with a zeal for education. Young men educated in New England traveled to every region of America to fill the positions of schoolmaster and to educate a nation. Noah Webster — author of a speller, a grammar, and a dictionary — insisted that every schoolmaster should require grammatically correct speech in his class.

"Every child who feared the hickory stick was obliged to clearly pronounce every syllable, every consonant, and every vowel as he or she read aloud to the class. Americans in log cabins and Western towns often spoke a clearer, more articulate English than was heard on the streets of London.

"Every child in the little red school houses learned Shakespeare, Milton, and the King James Bible. The New England primer began, 'In Adam's fall, we sinned all.' McGuffey Readers for older children included ['morals']. This vigorous education, centered upon articulate speech, helped to secure the success of democratic politics and constitutional government . . . . "

Now that vigorous academics have been "replaced" with such things as ebonics, "female studies," and "creative economics," constitutionalism could be relegated to the dustbin of history — unless we wake up, and SOON.

As we enter the "New Age" of the early 21st century, the fourth- and fifth-generation Americans have never heard of "Americanism" — the culture and Heritage that made us different from any other nation (beginning with the Pilgrims and Puritans).

THIS IS THE "WORLD" JOHN LENNON "IMAGINED" — A WORLD WITHOUT RELIGION — THE WORLD OF LENIN AND STALIN.

"The personality of [Fidel Castro] is overpowering. It was easy to see that his men adored him . . . "

P.S. To this very day, left-wing journalists care not about results or facts; "intentions" trump results easily, and "popular culture" trumps [they think] all of the lessons the Anglo-Saxons learned from history, from the fall of Rome to the fall of the British Empire itself.

WHAT WOULD ALL THE "OLD-FASHIONED" FORE-FATHERS BE SAYING TODAY? 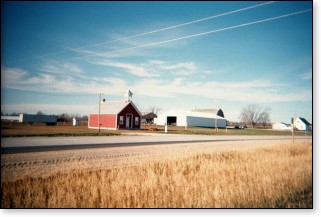