"Change we can believe in." – Bernie Sanders

"People must be so frustrated [so that] they are willing to let go of the past and chance the future [revolutionary change]." – Saul Alinsky

"One thing we know is that no revolution ever goes backward." – William Seward

FRUSTRATION IN THE PEOPLE is its own reward for revolutionaries; it's a necessary step to get people to "let go" of all the things they "bitterly cling" to – including blessings both spiritual and material. Your President's posing in front of an image of CHE is just another in-your-face gesture. I hate to equate the two, but when he shakes the bloody hand of Raul, a picture is worth a million words. If that sounds a bit "political," are you aware that the Castros murdered good religious people in the name of "politics"?

"The face is the window to the soul" and you don't even need the body language to see the bond between your President and Fidel, Hugo, and the king of Saudi Arabia.

OBAMA: We both live in a New World colonized by Europeans . . . 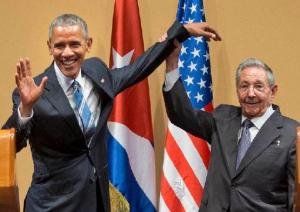 Just for the record, the U.S. was first settled by Puritans and pilgrims coming here for freedom, at the risk of their very lives; that's the very religious freedom that's now at risk thanks to Mr. B.O.'s "politics." Chris Cuomo spilled the beans in Cuba:

Like Rush, I'm still sitting here not really believing what I heard yesterday from Chris Cuomo, that sound bite about communism in which he said communism has got to work to promote individual liberty and upward economic mobility for everybody. I still can't get over this. That was such an eye-opener for me, how people have been lied to by, I don't know how many years, university professors – probably throughout the education level – about what communism is. 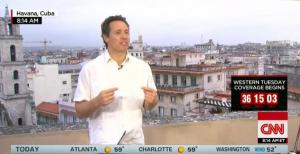 You know, if the truth about communism, if it's told, nobody could end up supporting it, if people actually knew what it is. And yet legions, hundreds of thousand, millions of Americans have starry eyes about communism. And I finally figured out why. They're being lied to about what it is. Communism is actually portrayed as the route to utopia. [end Rush quote]

Blood is thicker than water, and philosophy (sophistry) is deeper than brotherhood. It's all so sophomoric. Did you know that the word sophisticated originally meant "corrupted"? Corrupt is another word for "politically correct."

Just ask the Venezuelan people. They got communistic takeovers too, and now they can't find paper to wipe their own butts, let alone a pot to pee in. At least in America, the only toilet paper problem we have is lawsuits over copyrights on embroidered TP. That and keeping the enviro-mentals at bay over pollution and "killing trees" (while the "endangered" wolf kills 19 elk in Wyoming). Sigh.

BTW, Americans have no quarrel with the people of Cuba; quite possibly they could elect a Cuban-American as President. By the way, his Secretary of State could theoretically be Mr. Trump, he of "The Art of the Deal"! God knows, we could use some better "deals" than the one with Iran or Cuba.

While B.O. sits with Raul Castro at a baseball game, Brussels burns. While he dances the tango in Argentina, Paris and Brussels investigate Islamist extremists. The comments about Belgium by Mr. Oboma weren't even long enough for a minute of silence (which would have actually been better). As usual, he didn't name the enemy and there wasn't even a hint of sadness in his voice. He says he has "a lot on his plate" (did he mean State Dinner plates?).

Even Bill Clinton has decried the legacy of the last eight years. It's still the economy, stupid, but do you want to hear Hillary's voice for eight more years? That voice! In conclusion, I remind you, we get the government we deserve in the end. And the voice in the ear that we deserve. Because too many people stop up their ears to the Truth. As Brett Favre said after a game in Oakland, "Maybe it's time we started believing in something." That was a day or two before his father's funeral.

"It's not so important to be serious as it is to be serious about the important things." Someone said that and it may have been me. It's the long-range things that are "important" – not the instant gratification. Think on these things:

The shining city upon the hill,

A peculiar nation of law,

Even as "Israel of old":

May God mend thine every ill,

And heal thine every flaw.

He shed His grace on America bold;

May God thy gold refine (not just the money).

He soundeth forth the trumpet, will!

It's time to stand in shock and awe!

- Be strong and have true hope.

- Be of good courage.

- Resist the Enemy – within and without – and he will flee from you.

Happy Mother's Day, and as Jimmie Durante used to say, "Good night Mrs. Calabash, wherever you are."

ADDENDUM: Into the sunset

The last words in my manuscript were "Good night Mrs. Calabash, wherever you are." At the time of writing I wasn't even sure of a reason for choosing those words, but as events have unfolded, it turns out, I guess, that that was my translation of the Gipper saying, "WELL, see ya later, Nancy". . . . At any rate, I hope you will reread some of the quotations from President Reagan in this book. I left out one of the most important ones though. He once said:

"Future generations might have to ask OUR generation why those who had the most to lose did the least to preserve it."