Tom DeWeese
What will life be like under the Green New Deal?

What will life be like under the Green New Deal, The Deep State, and the growing tyranny we all face?

As Tom DeWeese says Our nation is being changed before our eyes in much the way I have described in ERASE. And, just as Ive presented, there are dedicated patriots racing to stop it. They are outmanned and over-powered. They are ridiculed and accused of spreading conspiracy theories. Some are now threatened with arrest simply for disagreeing with government policies that I have revealed in ERASE.

To preserve freedom, it is the duty of every American to learn and understand these dangers.

Now, you can read ERASE and you will know how evil forces can secretly manipulate us all to blindly accept their version of truth to change our world and destroy our freedom. That information in your hands is dangerous to their plans.

and watch your back!!!

A political thriller – by Tom DeWeese 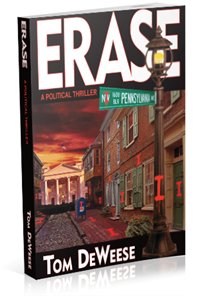 A political activist is mysteriously murdered, and a major publisher faces ruin as a powerful, yet unknown force threatens his industry. A TV preacher discovers a movement inside his own religion to remove God, and a high school teacher is told he can no longer teach facts in his classroom. By night, a graffiti artist splashes paint on the sides of government buildings and people feel a shiver of trepidation, wondering what his cryptic messages mean.

Five heroes wonder why these seemingly separate occurrences are happening, and whether they might be connected. Is it the failed policies of a popular, yet weak president causing them, or might there be a sinister force hiding in the darkness controlling it all? Can the events be stopped before it brings down the nation? A mysterious document rumored to be hidden in the dark corners of the Internet might have the clues, but will they be able to find it in time?

ERASE is a thrill ride of twists and turns as each clue is discovered through a maze of murder, mayhem and intrigue, and villains and heroes push against each other as they race to a surprising finish.

I think ERASE maybe the most important political novel since 1984, Atlas Shrugged, Brave New World and State of Fear.

Must Read Book: Tom DeWeeses ERASE Like Atlas Shrugged and the Left Behind series Tom DeWeese's ERASE presents a fictional path through a dystopian future. However, in ERASE every single policy presented in the book, from the use of technology to change our culture; to the use of the public school classrooms to eliminate true knowledge; to the destruction of Christianity in a drive to meld all religions into one powerful tool for government, is all true and happening at this very moment.

"Once in a while you read a book and say this is truly timely. ERASE is that book for today. It is believable. And it should be because much of what is in it has actually happened or is currently happening across the country."

"Tom DeWeese has mastered the art of story-telling and sounding the alarm in such a way, that while we are being entertained, we are also being enlightened. This is not only a suspenseful political thriller  this is the warning bell."

- Debbie Barth host of On The Grid Internet Talk Radio/ author of The Promise Book; Tell Someone

Heres what other readers have said:

I am reading Tom DeWeeses new novel ERASE which has all the flavor of the late Michael Crichton's State Of Fear and Rand's Atlas Shrugged.

DeWeese ties the Global Agenda into a fictional, fast moving, interesting story that would make anyone understand what is happening to our Country, even if they'd not been paying attention for the past 20 to 30 years. This will be a best seller shortly.

Murder, greed, tyranny, Agenda 21, and New World Order, all tied up in a package of deceit ... and lying at the front door of the White House. You are going to love this one.

It is eye opening, it is necessary, it is suspenseful, it is just well written. The characters are faced with the same fears, the same trying to stop it, the same helplessness, that many of us are facing daily as we fight to stop such a dark demon from destroying our real lives

I think the author did an excellent job in tying in all aspects of the world we live in today. Everyone should read it. It is in story form for the benefit of those who cannot wrap their minds around the world today. Factfiction I guess you would call it.

ERASE gives me hope, that everything wrong will be corrected, that good triumphs over evil.

Erase is so incredibly believable; I guess that is because most of the things in it really happened or are happening now in America. It is so good to have it in a novel..

You are a terrific writer. It really flows

It is eye opening, it is necessary, it is suspenseful, it is just well written.

I highly recommend the book, both as an excellent suspense novel and maybe one that will open some eyes to a real threat.

We finished Erase. WOW!! We really enjoyed it!"

I finished your book and it really had me thinking, that's the point right!

I am also enjoying your book.

Exciting read! Each chapter makes you look forward to the next. Relevant to today's America.