Tom DeWeese
Can we take back our election process?
What if we just said, None of the above! 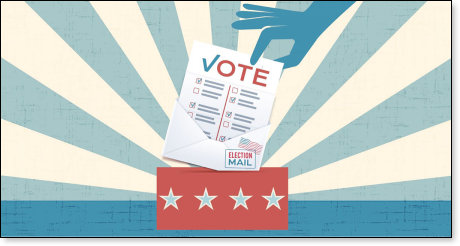 The clamor is growing louder every day. They dont listen. We have no real choice of candidates. The system is rigged for the elite. Theres no difference between the two parties.

You hear it every election. Endless talk about the need to create jobs, build the economy, make the nation a better place to live for our families, and, my favorite, restore trust!

Whos not for those wonderful things! The slogans work for Democrats and Republicans alike. These so-called issues are interchangeable. They are, in fact, nothing more than empty rhetoric.

Meanwhile, do we hear any serious discussion about how to stop our money from becoming more worthless every day from government spending and rampant inflation? The last serious statement I heard was from Biden, telling us to avoid inflation by not buying things! What about the destruction of our education system as its used for behavior modification while true academics are eliminated from the curriculum? Has any elected representative from either party taken the lead to stop schools from simply becoming factories that produce global village idiots?

Does any candidate dare mention the hopelessness taking over our inner cities as federal welfare policies enslave whole generations to the ever-expanding government plantation? As the hopelessness grows in these government compounds, invaded by drug dealers and violent gangs, as disinterested bureaucrats ignore broken windows, trash pileups, and broken air conditioning, government policy is demanding more government control of housing in the name of environmental protection. When have we heard these issues is ever mentioned in local, state, or federal campaigns? Never! Any candidate who would try would be immediately labeled an extremist!

Our political parties choose candidates that are acceptable, middle of the road, not rocking the boat, and not too extreme. In short, they force us to choose between two equally bad evils. Election after election the drone goes on. And what are we to do? These are the candidates the power mongers have chosen for us for city council, county commission, state legislature, Congress, and President. Yes, we have primaries to choose from, but I think we all know they have rigged just about all elections to assure the powers in charge get whom they want. Open primaries assure that.

Is it any wonder millions of Americans dont vote or participate in our nations debate because they think it doesnt matter anyway? The average voter increasingly feels that the decisions have been made for them. Worse, those who hold conservative points of view that our nation should live within the Constitution now believe socialism is inevitable, so why bother going to the polls. The Republic is lost, they say. The poor understand they are simply pawns in a vice grip between big money and special interests that control the elections.

And the growing proof of massive cheating in the last Presidential election has increased the feeling of helplessness which now rules the worlds once greatest democratic Republic. What political party is currently leading the charge to fix the election system? Meanwhile, as people stay home or trudge to the polls to hold their noses to vote for the next lesser of two evils, 93% of incumbents are routinely returned to officeyear after year after year.

The instant a candidate is elected and joins the ranks of the incumbents, they begin the dance. Get the money for the next campaign. How? Special interest groups, corporations, and foreign interests flood into their offices to make deals, promote their agendas and show the way to fame, fortune and perpetual officeif only the incumbents go along. They have the whole process well in hand. Campaigns become little more than big PR projects, promoted in positive platitudes, specifically designed to assure nothing negative sticks. Just get through it and keep the gravy train running.

Above all, do not talk about controversial subjects like dollar values, global trade, or immigration; just stick to issues like health care, and the environment  coincidentally, two issues bought and paid for by the special interests. See how it works?

So year after year, we officially hold elections and politicians pontificate about how our going to the polls is a revered right, a valued tradition, underpinning a free society. And they wonder why there is such division in the nation! How did we end up in such a mess? We voted for these guys. But did we enjoy it? Are we satisfied with the results? Would we like to demand a do-over?

Is it hopeless? Is there any way to change it? Do you want the people to have control of the election process and the choice of candidates offered? Do you want to force the power elites to listen to you? Ive got a solution.

Dont despair. Dont give up. There is a logical, effective way out of this. But it wont happen by depending on political parties to lead the way. We have to take things into our own hands. We need an effective, binding form of protest to say NO to bad candidates. There is such a way.

Imagine going into the voting booth and looking down the list of candidates offered. None really appeal. None seem to offer satisfaction as an answer to the issues that concern you. If only there was something else you could do. A write-in wont help. It would be a difficult and very expensive effort. It rarely works.

Then you look further down the ballot. Something new. It says NONE OF THE ABOVE. Its a final choice at the bottom of the list of the candidates in every category, from president, to congress to the city council. What does it mean?

It means you have the power to decide who will hold office  not the power brokers. When the votes are tallied, if NONE OF THE ABOVE gets a majority of votes over any of the candidates listed, then NONE OF THE ABOVE wins. And that means none of those candidates will win the office. The office will remain vacant until a new election is held. To set up another election and fill the spot would work exactly like the process provided in the Constitution when an incumbent dies or resigns, and a special election is held. Now new candidates will have to try to win the publics support.

Think of the consequences. No longer would voters have to settle for the lesser of two evils. If all the candidates are badnone would be able to force their way into office. It would mean that powerful special interests could no longer rely on their money to buy elections. They could buy all the ads they wanted, spend millions on volunteers going door to door and slinging their dirt, but if the voters arent buying, none of it will save their candidate from being rejected by NONE OF THE ABOVE.

Moreover, the power of entrenched incumbents who have been unbeatable because of their massive war chests and party ties would be broken. Picture McConnell or Pelosi unable to run for office because they were rejected by NONE OF THE ABOVE.

To get the job done, activists in every state would have to begin a campaign to demand that NONE OF THE ABOVE be given a permanent spot on the ballot. It would not require a Constitutional Amendment. It would have to be done state by state. Some states have ballot referendums and initiatives using petition drives to get an issue on the ballot, so the people can decide. Its difficult and expensive to do, but popular ideas have a chance.

In other states, NONE OF THE ABOVE advocates would have to find a friendly state representative or senator to introduce the idea before the state legislature and then get enough votes to pass it in both houses and then have it signed by the governor. The main drawback to that effort is obviousin that it has to pass in state legislatures where, if successful, then every one of those incumbent legislators will have to face NONE OF THE ABOVE on the ballot for their re-election. They probably wont be too excited about the idea.

So why would they support the idea? It would be only because supporters succeed in creating a strong movement of voters which demand it. No one is saying this will be an easy process. But such movements have succeeded before. For example, local activists could begin by demanding that candidates support the measure, much like they now sign no tax pledges. In short, they would support it because there is strong popular support, and they simply have no choice. We must change the political debatewhy dont elected officials support my right to have a citizens choice?

Of course, one of their main objections to the NONE OF THE ABOVE idea would be the requirement for holding a new election, should it win. Too expensive, our responsible public servants would say, as they dismissed the idea. However, if it means getting better candidates, isnt it worth it to hold a new election, especially considering how much a very bad candidate would cost us if he got into office? The fact is, such a need for a new election would probably not arise often once political power brokers began to understand that they must offer candidates acceptable to the people rather than to the special interests. Thats all they really must do. Its all we want. It only takes a couple of None of the Above victories to see that the electorate is back in charge.

The idea of NONE OF THE ABOVE has been around for a long time. Over the years, most states have had legislation introduced supporting the concept. Nevada actually has it on the ballotbut it is not binding. It doesnt force a new election. It is just a measure of protest. Thats not good enough to make it effective.

The best part is that NONE OF THE ABOVE isnt a conservative or liberal idea. Its not a Republican of Democrat proposal. Republican leadership might see it as a good way to break the back of big labors influence over elections. Equally, Democrats could see it as a way to stop the power and influence of the Republicans big business money. However, the parties want to look at it, the bottom line is that the voters win.

This will be a long-term process, and is primarily aimed at local, state, and congressional candidates. The real power comes from rejecting the candidates at every level.

But all of that depends on the voters. Do you want to take back control, or are you satisfied to have your choices made for you behind closed doors? Because thats what we have now. Hows that working for you?

April 28, 2022
The international treaty that will end the Great American Dream  if we allow it

February 19, 2022
Double-speak, lies, and precedents driving the Convention of States