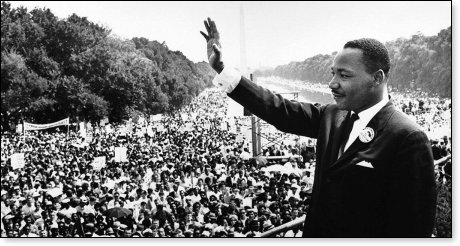 I wrote this article a couple of years ago. The Progressives continue fanning the flames of racism to further divide us. So, in response, I wanted to reissue this article to help expose their lies – the true source of the growing division. Tom DeWeese

Webster’s Dictionary defines Racism as “The assumption that the characteristics and abilities of an individual are determined by race and that one race is biologically superior to another.” Another more direct way of saying it is “Blind hatred of another simply because of his/her race.”

On an historic summer day in 1963, standing in front of the Lincoln Memorial in Washington, D.C., Martin Luther King inspired a nation as he said, “I have a dream that my four little children will one day live in a nation where they will not be judged by the color of their skin but by the content of their character.” That description of true freedom is the exact opposite of the definition of Racism. It describes various races living together in harmony through shared values, goals, and dreams.

When I was a young boy, living in my hometown of Newark, Ohio, my family lived on the east side of the city. That was also the location of most of the local Black population. So, many of my classmates in school, from elementary level to junior high school, were Black. This was before and during the growing civil rights movement of the 1960s when race became a major issue in the nation. But we, as students, were simply friends, in our classrooms, in gym class, in music class as we studied, played, and sang together.

I remember those early schooldays fondly. Yes we had differences among us, in culture, outlook, and family life. Yet, I cannot remember race ever being an issue between us. Most importantly, I especially remember certain Black individuals who were close and valued friends.

In the sixth grade, Brenda sat behind me. I loved making her laugh because she had a big laugh. It was infectious. Her face was covered with a big smile. One day, as I played a joke on her, she laughed and said, “Oh Tommy!” And she smacked me on my back and I fell on the floor – both of us laughing.

Brenda lived in my neighborhood. She came from a good-sized family of brothers and sisters. Her family owned one of the city’s leading refuse companies. Everyone knew their upstanding reputation. Many didn’t know that Brenda’s family had helped to establish the first Black school for the city decades earlier.

We lost touch when she went to a different junior high school. Just a few years ago Brenda and I had a very emotional and joyous reunion. It had been almost 50 years since we had last seen each other. We sat in her living room and shared stories and laughs, and caught up on the lost years. She still has the great laugh and calls me Tommy! I will forever value her friendship and look forward to seeing her whenever I can.

Also, in that same sixth grade year, three more Black students entered my life. They were two brothers and sister, named Jerry Davis, Marvin, and their beautiful sister Jerry Dean. They had just moved to the city from Alabama. These were the sweetest people I had ever met. I liked all three instantly. Marvin taught me a talent I still use today to impress people. He showed me how to create a beat with my hand slapping my leg then up to my chest. I can still do it with both hands simultaneously!

Over the next few years, Jerry Davis, Marvin, and I shared a love for basketball and good times on some intramural teams. I remember one specific moment when they showed their loyalty and character to our friendship. We were walking home from high school after a game. It was a long walk — clear to the other side of town from the school. As we were walking along, a friend of theirs drove by and offered them a ride. He didn’t offer one to me. Both Jerry Davis and Marvin stopped and looked at me, hesitating to accept the ride. I fully understood their reluctance and found it a very touching moment. I immediately said, “oh please, go ahead,” and they rode off. But the fact that they had hesitated honored me and I remember as if it were yesterday. I would love to see them all again.

As I moved on to the seventh, eighth, and ninth grades, I attended the rightly named Lincoln Junior High School. It had the largest population of Black students in the city. We were the Lincoln Lions. Unexpectedly I found myself on the school’s track team. There I met Sherman. He has the most incredible physic I had ever seen. He was pure muscle. His back was that perfect V from his waist up to broad shoulders. And his legs were massively powerful. When Sherman ran it was as if his feet never touched the ground. I was in awe of him. I was 5’4” at the time and very skinny. But I discovered that the block I lived on was almost 440 yards around – exactly the dimensions of the track where we ran. Day in and day out I would run laps around that block, trying to build up my muscles to look like Sherman. I never came close.

The next two years Sherman and I were both on the basketball team. Well, Sherman was a star player, but at 5’4” and 75 pounds, I was a manager. We spent many long hours in the gym and at practices and I did all I could to watch him and learn. Another player on the team was John L. He was tall and lanky. Sherman and John L were the stars and led our Lincoln Lions to the county championship. They then went on to lead the high school team for a couple of very successful years. Race was never an issue. Respect and friendship were the only thoughts in our heads.

We graduated. Our class had many reunions. But Sherman and John L never attended. No one knew much about their whereabouts. Then one day, I believe it was our 40-year class reunion, we were all standing on an outside patio, eating and talking, when suddenly a car pulled into the parking lot and two people starting walking toward us — Sherman and John L. As they entered the patio, they were absolutely mobbed by every one of us. Hugs, smiles, and handshakes. It was a reunion of pure love and respect for these two. Just a couple of years ago I was finally able to tell Sherman that he had always been my hero and role model.

A few years after graduation, I started an advertising distribution company. We delivered flyers, coupons, and samples door to door in plastic bags. I had over 130 carriers in three counties. One day I got a very big account from a company that was introducing a new dog food called Alamo. The strategy was to knock on doors and if people had a dog, we were to give them a free sample in exchange for their address. The client was building a sales list.

To help accomplish the task in some of the rural areas, I put a team of young guys together in a van. I drove and directed them. They knocked on doors and passed out the samples. The team was about half White and half Black. The guys had a great time laughing together. One of the young Black guys had a very outgoing personality and he was always quoting comedian Richard Pryor. He began by saying, “My man Richard Pryor says…" it was great fun. We spent several weekends together getting that dog food into the homes. And we laughed as I named the van the “Oreo Speed Wagon” in honor of our diversity. They loved that.

My life experience has shown that there is no need for the blind hatred that is now growing across the country. Respect of character and values goes both ways. On that day in 1963, Reverend King went on to say, “Let us not seek to satisfy our thirst for freedom by drinking from the cup of bitterness and hatred. We must forever conduct our struggle on the high plane of dignity and discipline. We must not allow our creative protest to degenerate into physical violence. Again and again, we must rise to the majestic heights of meeting physical force with soul force. The marvelous new militancy which has engulfed the Negro community must not lead us to a distrust of all white people, for many of our white brothers, as evidenced by their presence here today, have come to realize that their destiny is tied up with our destiny, and they have come to realize that their freedom is inextricably bound to our freedom. We cannot walk alone.”

The contrived racial hatred now insists that only Whites can be racists. What an utterly stupid, brutal position to promote. It defies logic and human history in which there are countless examples of interracial relationships built on love and respect. What about those individuals from different races who have genuine affection for each other? Where does that fit into the definition of blind racial hatred? What about those who marry and have children together? Are we to accept that the White spouse and parent is a racist who only wants to subjugate their spouse and children? In my entire life I have never felt negative feelings about someone simply because of their race. If I have disliked someone it has always been about attitude, character, or values.

These are the reasons why I’m emotionally drawn to the vision presented by Louis Armstrong when he sang, “The colors of the rainbow, so pretty in the sky, are also on the faces of people going by. I see friends shaking hands, saying how do you do. They’re all saying I love you. I hear babies cry, I watch them grow. They’ll learn much more than I’ll ever know. And I think to myself, what a wonderful world.”