Anna Githens
There'd be no Santa Claus without St. Nicholas!

December 19, 2013
I find it very troubling when someone's legacy is discredited, especially if that someone was a saint who dedicated his life to helping the poor. While it is apparent that secularists have hijacked Christmas, hearing the media speak of good ol' Saint Nick as though he was a myth conceived from a poof of fairy dust is taking things too far.

Recently the article "Santa Claus Should Not be a White Man Anymore," published by Aisha Harris, has received a lot of attention. In the article Harris says we should "ditch the old white man altogether" for a "Penguin Claus" because she and "millions of nonwhite kids" felt insecure about it as children. She says she remembers feeling slightly ashamed that the black Santa her parents portrayed wasn't the real thing. When she questioned her father about Santa's true skin color, "[he] replied that Santa was every color." Good answer. Evidently the wisdom of this response has yet to penetrate the minds and hearts of Ms. Harris and the race-fixated in our present day society.

Megyn Kelly of Fox News has received a lot of flack for stating a visible accuracy: Santa is white. Shocking! The nerve of her to reveal that every illustration she has seen throughout her lifetime depicted Santa Clause with white skin! Think: Miracle on 34th Street... Coca-Cola commercials... 'Twas the Night Before Christmas. Must we really pull the race card on Santa?

These racism accusations need some clarification. Is it racist when a person looks at someone and states his or her skin color? Is it permissible to say that the Pillsbury Dough Boy and the Abominable Snowman are white? Perhaps the rules don't apply to dough and fur, but Santa has been portrayed white because he is based on a historical person who lived in the fourth century.

While Kelly's description of the mythical Santa is accurate, it did not carry with it an abjuration that one is not free to create one's own mythical Santa-like figure. Anyone has been free to do so since the birth of Santa Claus in America. However, since his story is derived from the real life of St. Nicholas, calling him a myth is inaccurate. It is more fitting to call his story a legend, though over time the lines between fact and fantasy became blurred as Santa took on new and creative character traits.

Even though the creative minds of authors and illustrators over hundreds of years gave St. Nicholas a gradual transformation, his essential attributes have endured the test of time.

For instance, St. Nicholas, the real person, lived in A.D. 270 in the Roman town of Myra. He was a beloved bishop who cared deeply for the poor. Wearing a red bishop's cloak and accompanied by a little orphan boy as his helper, he would secretly toss sacks of gold through the windows of the needy, pay for the dowries of impoverished young brides, and deposit coins and treats in the shoes of children.

One story tells of Nicholas's determination to stop a poor father from selling his three daughters into prostitution for lack of dowry. Upon awakening one morning, the father found a bag of gold that he believed was a godsend but had been left anonymously by Nicholas. Sneaking away one night after his third visit, the father caught him, kissed his feet and said, "Nicholas, why do you conceal yourself from me? You are my helper, and the one who has delivered my soul and my daughters' from hell." [1]

St. Nicholas was canonized after his death, which was on the sixth of December in A.D. 342. He is the patron saint of children, sailors, voyagers, brides, and the country of Greece, to name a few. He is often depicted next to a barrel in which the bodies of three murdered children were hidden but were restored to life by the Saint. His relics exist today in Bari, Italy, after being transferred in 1807. After fifteen hundred years they are still known to heal many illnesses. [2]

St. Nicholas was long revered and his story remained popular for many years. Elaborate feasts were celebrated each year on the day of his death and small gifts were left in the shoes of children in his honor. His popularity only waned during the Protestant Reformation when the veneration of Catholic saints was suppressed throughout many parts of Europe.

His story was kept alive, however, in the Netherlands where he was known as "Sinterklaas," or Sint Klaas, which means Saint Nicholas in English. According to folklore, Sinterklaas was a "kindly figure who traveled from house to house on the evening of December 5, leaving treats or presents in children's shoes in exchange for a snack for his horses." In the Dutch tradition, Sinterklaas "wore red bishop's robes, had elfin assistants, and rode his horses over rooftops before slipping down the chimney to deliver the gifts."

It was the Dutch who brought the mythical Santa Claus, along with the Dutch name, to America. Upon landing in the New World in 1642, "Dutch explorers, led by Henry Hudson, built their first church on the island of Manhattan" and dedicated it to Sinterklaas. In 1664 the British took over New Amsterdam and decided to adopt the Dutch version of Sinterklaas and merge it with their own Father Christmas in observance of the Winter Solstice. Over time, these two merry old gentlemen merged into one, and the name was modified to "Sancte Claus."

Years later, in 1773, Santa Claus was mentioned in a New York City newspaper. In his book published in 1809, A History of New York, Author Washington Irving described him as "portly and smoking a pipe" instead of as a "lanky bishop." Then in 1822 Clement Moore, an Episcopal priest, wrote his famous poem "A Visit from Saint Nicholas," more commonly known as "'The Night Before Christmas" which depicted Santa with a stomach "like a bowl full of jelly" and a magical sleigh with a sack full of toys led by eight tiny reindeer.

Illustrations accompanied these stories. For the first St. Nicholas anniversary dinner at the New York Historical Society in 1810, artist Alexander Anderson was commissioned by John Pintard to draw an image of the Saint. Perhaps the most famous was that of Coca-Cola ad illustrator Haddon Sundblom of a 1930's Santa clad in a white fur-lined red suit and black leather boots. 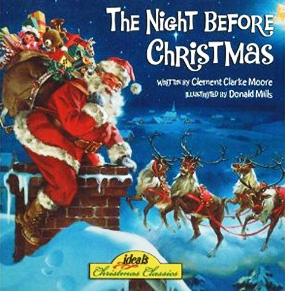 These famous authors and illustrators provided for us the iconic image of the Santa Claus we know and love today. This image became the standard for reasons that are quite simple: a jolly, rosy cheeked, kindhearted, generous, gift-giving soul appeals to people. The unique gifts and talents of the authors, illustrators and poets brought him to life for us.

Habitual charitable acts and monotonous gift giving does not make for a beautiful story. "God loves a cheerful giver" (2 Cor 9:7) Why cheerful? Cheerfulness describes the condition of the heart. God wants our hearts to match our actions. The word charity is derived from the Latin word "caritas" which means "generous love."

I could not imagine, nor conjure up, a life more mystifyingly beautiful than that of St. Nicholas. He lived to help others. How wonderful it must have been for that poor father to find bags of gold, for those impoverished young women to be saved, for those children to find coins or treats in their shoes, all done in secret like a magical mystery.

We must stop hyper-focusing on skin color and instead focus on character, a dream once envisioned by Martin Luther King. We can make that dream a reality. There is so much more to a person than his or her surface. If we stop with the skin we won't see the beauty in the heart... or the twinkle in the eye.

"Of course, since we created Santa," says Aisha Harris, "we can certainly change him however we'd like – and we have, many times over." Exactly who is "we"? Irving? Moore? Sundblom? Perhaps it's the Dutch explorers during the late seventeenth century. Ms. Harris appears to be denigrating poets and illustrators that are no longer here. She is making an appeal to us yet is criticizing us for getting it wrong at the same time.

We cannot evade the fact that the story of Santa Claus is rooted in St. Nicholas. He evolved from genuine people, real cultures, and historical time periods. His character was built on authentic living traditions, rooted in faith. Instead of trying to change others we would benefit from appreciating the beauty and goodness encased in centuries old traditions.

What if a present day tradition began in honor of Mother Teresa? For example, if shelters were opened in her name (some do exist) and people went about imitating her kindness. Wouldn't it seem silly if hundreds of years from now someone demanded a black Mother Teresa?

Credit should be given where credit is due: Santa wouldn't exist if St. Nicholas, the bishop of Myra, hadn't existed. A real, self-sacrificing, generous man with a gentle soul: St. Nicholas is the exemplar for the Santa Claus we know and love today. 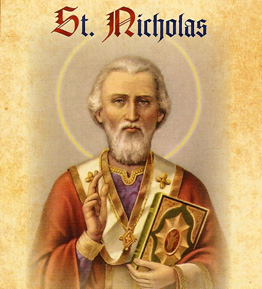