January 1, 2012
My friend Michael Bates has raised some interesting — if technical — points. He notes that Ron Paul could very will win Iowa but still come away with few or even no Iowa delegates. After looking over Bates' points, I think he has it right. But one thing he said is really trenchant when he noted that journalists don't bother to read the party rules of correlate past history to see if Paul's win in Iowa would really mean anything at all. 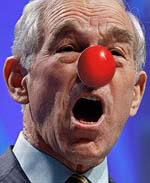 But first, we should note that the winner of the Iowa Republican caucus rarely becomes president. Many others have noted that the Iowa caucuses don't pick winners. In fact, over the last six GOP presidential contests, only one Iowa winner became president (George W. Bush). Two others won the caucuses in Iowa but did not win the White House (Bob Dole and Gerald Ford).

That aside, Bates makes some important points in the delegates process. He finds that Ron Paul might win a plurality in Iowa and still come away with no delegates. The most important point he makes is to remind us all that the Iowa Caucus is not a primary election. It is only a straw poll and what happens there is not binding. This is a point that the media almost never make.

As the popularity polls are telling us, Ron Paul is neck-and-neck with Mitt Romney with Santorum have a last minute surge. But this shows that Paul will not be running away with it all, here. This also means that his support will be spread all over the state in numbers that will not commandingly control too many districts. This leaves the door open for the other candidates to band together to prevent Paul delegates from getting any traction and just might result on Paul have few or even no delegates at the state convention.

As Bates has it:


If Paul is to have any backers at all at the state convention, it will only happen if [his] campaign successfully mobilizes its supporters to constitute a majority of the caucusers at a majority of the precincts in at least one county. If Paul's 25% support is spread evenly across the state, he will have no delegates at the Iowa state convention and no delegates from Iowa in Tampa.

This outcome would not be the result of a grand establishment conspiracy against Ron Paul. It would be a reflection of how Paul polarizes the Republican electorate. While Santorum, Perry, Bachmann, and Gingrich supporters may disagree about the relative merits of their candidates, they are all likely to agree with each other and differ strongly with Paul supporters on issues like Iran, Israel, drug legalization, and whether 9/11 was an "inside job."


Seem unlikely? Bates begs to differ. After all, this happened in Oklahoma in 2008 when Paul's delegates were shut out by more mainstream GOP operatives that prevented his representatives from getting any traction at the Sooner State's GOP convention that year.

Bates wraps up saying, "Ron Paul may "win" the Iowa caucuses straw poll by a narrow margin with a tiny plurality, and that result may boost fundraising and volunteer activity, but it won't boost his delegate count at all."

Please do read all of Bates' analysis because he has some points we all need to remember when looking at all this Hawkeye hooplah.