January 3, 2010
The nation's most important New Year's resolution is to remove the Marxist majority in Washington. The most important question facing the nation is how to do it. There can be little doubt that the national sentiment opposes the Marxist policies being imposed by the current majority in Washington. Poll after poll, parade after parade, Tea Party after Tea Party vividly demonstrate the nation's frustration with Obama's "fundamental transformation of America." Removal of this majority will take an extraordinary effort from people who are willing to put the nation ahead of ego, and work together to achieve the common goal. 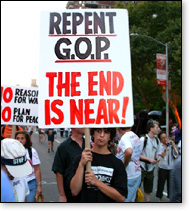 An objective analysis of the situation leads to only one conclusion: Republicans must regain the majority in the 2010 election.

Of course, people who have been working for years to build a viable third party will disagree  violently. Those who hate George Bush, and by extension, all Republicans, will also disagree. Those who think Obama will somehow prevent another election have thrown in the towel and given up. The cold, hard truth is, however, that the Republican Party has the best, if not the only chance to unseat the current majority.

This does not mean that all of the people who are marching in the streets have to trade in their convictions and morph into Republicans. It means that the people who want to return America's government to the vision set forth in the U.S. Constitution must seize control of the Republican Party and transform it into an unbeatable political power focused on restoring the Constitution, free markets, private property rights, and individual freedom.

In many ways, the Republican Party is no better than the Democrat Party, especially judging by its performance in recent years. The fact remains, however, that it is the second largest political party in the nation. It has an infrastructure in every state. Its candidates get on the ballot without the hassle experienced by third parties. There is an existing war chest and money stream. It is all available for the taking.

The quickest way to political power is to take control of the Republican Party, in every precinct, in every county, in every state, and finally, across the nation.

There are many great candidates working hard to gain recognition, funds, and ballot access in several conservative political parties. Most are working in vain. These candidates should run as Republicans in Republican Primaries, and then all join in support of a worthy winning candidate. Any conservative candidate who has any chance to be elected would have an even better chance of getting elected as a Republican than as a third-party candidate.

The reason third parties exist is because someone became so frustrated by the major party's refusal to acknowledge a particular issue that rather than argue, fight, and persuade, they simply left to try to find like-minded people outside the party. At the national level, despite many third-party efforts, none has been successful. The nation cannot stand another century of third-party building. The nation cannot stand another year of this current Marxist majority. 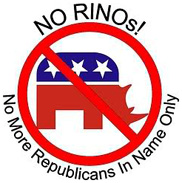 All conservative third parties should put their party-building on hold for a year, and descend upon the Republican Party en masse, and demand that their county and every state adopt a strong, Constitution-based platform, and offer only candidates whose life demonstrates respect for the Constitution. Send the mealy-mouth RINOs packing, and present a slate of candidates who honor the Constitution and the American values that are being trashed by the Marxist majority.

Democrats, particularly in the South and rural communities of the West and Midwest, are sick of the crowd now dominating Washington, and of the Marxist philosophy that has overwhelmed the Party. They too should be recruited to help  if only for this year  to remove the cancer that is eating away at America's freedom.

There are dozens of conservative political parties, each shouting for attention, each working to restore American values, and each being largely ignored by most Republicans, and all Democrats. On their own, none of the conservative parties, including the Republican Party, can remove the Marxist majority in Washington. Working together toward the common goal of changing the current majority, the conservatives cannot fail.

Like it or not, the Republican Party is the best tool available to do the job that needs to be done. As it is, it is not sufficiently powered, nor even aimed in the right direction to accomplish the job that must be done. It will take disgruntled Democrats, Third Party advocates, Libertarians, Constitutionalists, Free-marketers, Tea Party marchers, and even formerly apathetic couch-potatoes, all working together, to take control of the Republican Party, and to run the Marxists out of town.

There is no more important New Year's resolution for the nation.

Henry Lamb is the author of "The Rise of Global Governance," Chairman of Sovereignty International , and founder of the Environmental Conservation Organization (ECO) and Freedom21, Inc.

April 8, 2012
Why the President should be fired