October 12, 2009
Lloyd Marcus is a black conservative activist, national spokesperson, entertainer and singer/songwriter of the "American Tea Party Anthem." Marcus announced publicly at a tea party that he will not refer to himself as an African American. "In this current climate of heighten racial tensions, rejecting hyphenating and simply calling myself an American is a step in the right direction towards my goal of uniting all Americans" says Marcus. 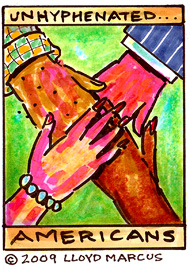 Marcus is internationally known for his columns, music recordings and participation performing on political tours including the hugely successful Tea Party Express tour.

Marcus says he is not alone in his opposition to Americans hyphenating. It began in March 2009 at a Tea Party in Orlando Florida. Before performing his original song, "American Tea Party Anthem," Marcus addressed the audience. "I am NOT an African American. I am Lloyd Marcus...AMERICAN!" To Marcus' surprise, the audience of 6,000 erupted with applause.

Marcus experienced the same overwhelmingly positive and supportive response from audiences at 34 rallies across America while traveling on the Tea Party Express tour. "Many came to me with tears in their eyes saying, Thank you! I can't tell you how much what you said means to me." says Marcus. Americans told Marcus that while they have no problem with people honoring their ethnic heritage, we should all be Americans first. These patriots feel hyphenating divides us.

Marcus recalls a heartwarming incident at a tea party. An Asian gentlemen with his wife and four kids approached Marcus. Responding to Marcus' earlier comment, in broken English he said, "Me no Asian-American, me AMERICAN!" Then, he and Marcus embraced.

Another reason for ending hyphenating is hopefully it will reinforce the pride, honor and privilege of being an American. Over the years, secular progressives have taught in our schools that American patriotism is arrogant, unsophisticated and insulting to the rest of the world. Meanwhile, it is acceptable for other nations to hold their homeland in the highest regards.

The revelation that most Americans do not like hyphenating confirms to Marcus that Americans have been manipulated by political correctness, accepting things we do not want.

Marcus' campaign to end hyphenating is not one of condemnation. "I highly respect and celebrate freedom for which many brave have suffered and died. All who wish to continue hyphenating have a right to do so and will not receive judgment from me. I simple will not hyphenate. I believe most of my fellow Americans will follow." Lloyd Marcus, Black unhyphenated American.