Lloyd Marcus
Black History Month should be about black history

February 1, 2010
I've often said jokingly that Black History Month should more accurately be called "white people and America suck" month. Rather than focusing on all of black history, every February the liberal media and most democrats gleefully bring up all of America's past sins. Fine. I mean after all, it is a part of history. But what is so wrong is these race exploiters imply that current race relations in America have not come very far from the days of blacks being lynched. Thus, Black History Month in reality is the liberal democrat's annual fund raiser and promo campaign for more entitlement programs. 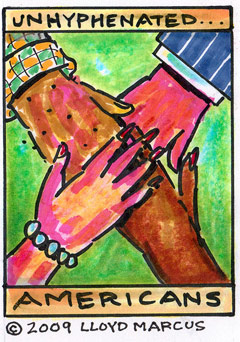 American blacks have achieved amazing things under extraordinary circumstances; most of which could not have happened without the assistance of good decent God fearing whites. But we never hear about these white "good guys."

At age 12, George Washington Carver witnessed the hanging and burning of a fellow black male by the KKK. Carver never forgot it. As a young man, a white family saw Carver's potential and encouraged him to apply to attend a white college. In 1890 Carver was accepted at Simpson College in Indianola, Iowa. Due to Carver's character and brilliance in art, music and science, he won the respect of the faculty and his fellow students. A white teacher suggested Carver focus his career toward horticulture. Carver followed her advice. The teacher introduced Carver to her father who was a doctor. With the doctor's endorsement, Carver became the first and only black student at Iowa Agricultural College in Ames, Iowa. Again, Carver was extremely active and popular. A new white student objected to Carver eating in the dining hall. The new student was shocked when all the students rejected him and rallied around Carver.

This incident confirms my belief. Yes, there are evil knuckleheads in the world. But when you do the right things, decent people will rally around you. George Washington Carver went on to become a great humanitarian and a world renowned scientist. Carver's achievements were extraordinary.

As a child, Carver had witnessed the worst behavior by whites, the murder and desecration of a human being by the KKK. And yet, as an adult the generosity, kindness and encouragement of whites enabled Carver to bring his amazing discoveries to the world.

During slavery it was illegal to teach blacks to read. And yet, whites did educate blacks because they knew it was the right thing to do. The Civil War was fought and the Republican party was founded with the liberation of blacks as a major issue.

Every Black History Month we are bombarded with specials showcasing white America's history of persecuting blacks while totally ignoring the history of white blood, sweat and tears shed for blacks. It appears that all black achievement was made in spite of and without any help from racist white America.

As long as race exploitation is a profitable industry, America will never be allowed "off the hook." Outrageously, the Obama administration called the same white majority who elected him racist for rejecting his government run health care plan. Race exploiters will never retire the Race Card. Race profiteers say, "Ah, it's my favorite time of the year, Black History Month. Time to convince America that they owe us and hit them up for more freebies!"

I would love to see a more fair and balanced celebration of Black History Month. Make it more focused on black achievements and less about victim-hood-ism. Kids need to learn more about hard working self reliant blacks such as Booker T. Washington who in 1881 founded the Tuskegee Institute in Alabama. Washington encouraged blacks to be entrepreneurs.

Before the 1920's, Madame C. J. Walker started out as a poor little black girl, orphaned, abused, and uneducated early on in life. Walker started her own business of manufacturing hair goods and preparations and became a millionaire. Her motto was only one-self can help themselves to get where they want to be. "...if I have accomplished anything in life it is because I have been willing to work hard." said Walker.

With Walker becoming a millionaire at a time when America truly was racist and sexist, how can modern day blacks justify having a victim and entitlement mindset.

In fairness, Carver, Washington and Walker are featured during Black History Month in classrooms and the media. But it is not mentioned that the success of these outstanding Americans is testimony of the greatness of our country. I am simply saying Black History Month should not be used for extortion, an occasion to portray white America as villains and to lay a "guilt trip" on them.